Hunting down their targets.

They are three ferocious dogs consisting of a mastiff, a pitbull and a poodle who serve as the loyal pets of David Banner, who later mutated them into monstrous creatures with the Hulk's DNA.

David Banner, while working as a custodian at the same lab as Bruce, took the DNA of his own son and experimented on three dogs consisting of a mastiff named Smokey, a pitbull named Sammy and a poodle named Lily to see how his son's "disease" would be replicated. The three dogs became enlarged, muscular, monstrous, powerful and feral. Banner sent his mutated dogs to Betty Ross so they would slew and possibly eat her in an attempt to have Bruce unleash his "real son".

Encounter with Hulk and demise

As Bruce received a phone call from his father, he learned that the dogs are after Betty and would kill and devour her. Bruce became angry from this and, (in part to Glenn Talbot instigating with Bruce), became the Hulk. He went to Ross's aide and engaged in a vicious and feral battle with the radioactive canines. The two larger Gamma dogs Smokey and Sammy engaged the Hulk in battle while the Gamma poodle Lily terrorizes Betty who took refuge inside her SUV. While Lily is trying to get Ross, Hulk uses a fallen tree trunk to swat the poodle away. Hulk, Smokey, and Sammy were locked in fierce battle. The Hulk manages to get the fight away from Ross and continues fighting the beasts further into the forest. The dogs have the Hulk pinned for a brief moment, only for Hulk to fight and even bite Smokey's leg. Lily bites down on Hulk's groin, actually hurting the green giant. Infuriated, Hulk then grabs Lily by her ears and slaps her away. He then uses the poodle as a weapon and swings her at Smokey. The Hulk then humorously lifts Sammy up and punches him hard in the testicles. With the canines briefly discombobulated, Smokey and Sammy corner Hulk, but as they pounce towards him, he jumps upwards into the trees, causing the two dogs to collide into each other. The dogs corner and leap on Hulk, but the weight causes the tree to fall down. The fall gives Hulk a leg up as he slams a boulder in Sammy's face, presumably smashing his skull and killing him. Lily begins to go after Betty once more while Hulk is charged and leaped on by Smokey. The Hulk, now angrier, thrusts his fist down the dog's throat. He then lifts Smokey up and aggressively slams the mastiff down. Before the dog can recover, Hulk then smashes Smokey with his fists, causing a great spray of green blood. Lily continues her attempt in getting Betty, but Hulk jumps up and body-slams the poodle through the windshield, crushing Lily. Ross is then face to face with the dead dog as Hulk then tosses Lily's melting corpse away from her, causing the body to explode into a green spray in the distance. The fight seems over and Hulk calms slightly, only to be blindsided by Sammy, causing Hulk to punch, claw and grab at the creature's muzzle. Sammy, getting more intense, sinks his sharp teeth deeper into Hulk's flesh. Then, with his intense strength and anger, Hulk enlarges his trapezius and breaks Sammy's jaws, causing the pitbull to let out a yelp of pain. Hulk then slams the dog onto the hood of Ross's SUV and in one swift move, shoves his hands into Sammy's mouth, whereupon he violently rips apart the canine to pieces, sending a massive spray of green blood. Hulk, now covered in scratches and bite wounds, looks and snarls at Betty before finally both calming down and healing near a lake and reverts back to Banner exhausted after his battle with the mutated dogs.

David's dogs behave like any normal dogs and follow David everywhere apparently trained to do so. They even accompanied him at his janitorial job at the lab Bruce works and the hospital he was in. The three dogs are orient towards David Banner, and seem to be very obedient to him before and after their transformation. Post-transformation they have become more savage, dangerous and intensely aggressive. While fighting the Hulk, they are incredibly relentless and after receiving deadly blows and punches from their adversary, they continue to fight until the Hulk slaughters them. However, it is hinted by their creator, David Banner, that their lives were going to be cut short due to them being unstable from the Gamma radiation and nanomeds cultured from Bruce's DNA. It appears that their owner held no quarms of pitting them against the Hulk and doesn't seem concerned that they never return to him. When Betty first encounters David at his home in Oakland, he advises to her to "not look them in the eyes, they don't like to be looked in the eyes". Possibly in an attempt to frighten her or serve as foreshadowing his ill-will against her.

Interestingly in the novelization the dogs seem to have played a slightly bigger role (albeit psychological), in which Betty Ross is traumatized from bearing witness to Hulk gruesomely slaying the mutated dogs and fearing what the Hulk is capable of, Bruce himself being disturbed at how he seemingly enjoyed killing the canines while recognizing that he killed living creatures with his bare hands and David, when entering the lab destroyed by the Hulk's first transformation, acknowledged that his dogs failed to return but revealed that he used them to see how powerful the Hulk truly can be. Unlike in the film, it is hinted that David actually cared about his dogs and was slightly disappointed at the realization that Hulk destroyed them.

Originally an American Staffordshire Terrier/Mastiff, Smokey is the largest of the three beasts with a thick musculoskeletal build and big, powerful jaws dripping with thick saliva. Smokey appears to have green and silver-grey tints and patches to his fur. In addition he has large wet patches of green sores on his shoulder, muzzle, back and legs. Despite his massive size and weight, he is relatively fast and extremely durable. For example, when all three beasts jumped across the lake, Smokey landed first, even though Lily leaped first. Before, he appears to have seemingly been a friendly and playful canine, playing with Sammy and was the least aggressive dog of David's as he didn't growl at Bruce in the hospital. Exposure to Gamma radiation made him into an aggressive and savage canine powerhouse. He appears to have moss and a wood-like substance growing on his body as well as the left side of his face appears to be scarred and melted. He appears rather difficult in battle as anything thrown at him is absorbed due to his ruggedness and at one point Hulk is seen holding Smokey's jowls open to avoid the dog from biting. Despite his durability, Smokey meets his demise when Hulk is forced to destroy the mutated dog by slamming him on the ground then smashing his body with his fists, resulting in a burst of green gore and leaf-like fur. Even moments before death, after Hulk punches his fist and half his arm down the giant dog's throat, Smokey is seen attempting to chew onto his opponent. Originally, Smokey was to have his neck grabbed with Hulk crushing his head in his hand according to the novelization, resulting in a bursting of pulp and skull fragments.

A powerful Gamma-irradiated pitbull, Sammy is the most dangerous, with his freakishly large jaws with green gums and thick muscles bulging for jowls as well as eerie glowing green eyes. Sammy appears to have green tints to his fur as well as bald, wet, patches of exposed sores covered green flesh on his massive neck, head, jaws and shoulders. Originally an American Pitbull Terrier, Sammy was a normal dog owned by David Banner. He appeared to have been playful as seen earlier when he is running with Smokey. After an exposure to Gamma radiation, he becomes an unstoppable beast. Sammy seems to inflict the most pain to Hulk during the battle, as he is constantly locked on his opponent with his jaws and massive teeth. As a result, he appears to receive the most brutality from Hulk including the most gruesome death. Sammy has a low profile to the ground when moving and is the fastest of the three beasts. He has a noticeably thick neck with huge, hard muscles and a wide flat head. He can withstand sharps blows to his skull and can still go after Hulk. At one point, Hulk punches the canine's testicles and within moments, Sammy is back in fight mode. He is seemingly killed when Hulk smashed a boulder into the canine's face, only for Sammy to recover and lock onto Hulk's trapezius. Hulk enlarges his muscle, breaking the beast's grip and jaw with a sickening snap. Hulk grabs the canine by the head and slams him down. Sammy is finally slaughtered when Hulk, who has the dog laid upside down on the hood of Ross's SUV, opens the dog's broken jaws and rips him in half in a spray of green gore.

A large Gamma-irradiated French poodle, Lily is the second largest and only female of the trio of beasts. Despite her breed, she possess a strong, muscular build. Unlike her two male counterparts, she has less green on her body and is the least mutated in appearance. Lily still has glowing green eyes and her tongue and jowls are green. She seems to be the most obedient of the three as she is totally focused on getting to Betty Ross rather than Hulk. Before her exposure to Gamma radiation, it is hinted that she is one of David's favorite as she is seen sitting by his side when he enters Bruce's lab. In something of foreshadowing their Gamma-irradiated battle, Bruce encounters Lily sitting in the hallway of his lab. When he approached her, she gnashed her teeth at him as a warning not to touch her without permission. She appeared to be more reserved in comparison to Smokey and Sammy, sitting by David's side while the former two run amok and play. During the battle she still does attack Hulk at certain times while most of his damage comes from the two male beasts. She has the least damaging bites albeit when she bit and latched onto Hulk's groin. This resulted in him smacking the dog off hard with Lily flipping before hitting the ground. She is the most threatening to Ross whom is the intended target by David. Interestingly, this suggests that Lily is the most intelligent of the group but no less savage. Like the other two dogs, Lily eventually meets her match at the hands of Hulk as the others do. As she is attacking Ross's SUV, Hulk who had just killed Smokey, jumps high above and lands squarely onto Lily, snapping her spine. Lily's head is thrown through the windshield by the impact and is inches from Ross's face. As Ross looks into Lily's face, the dog's body begins to melt right before Hulk then aggressively grabs Lily's corpse and throws it away from Ross, where it explodes in a glowing burst of green mist midair. Seemingly the damage inflicted upon Lily had caused the Gamma radiation in her to go into meltdown, resulting in her remains melting then exploding. 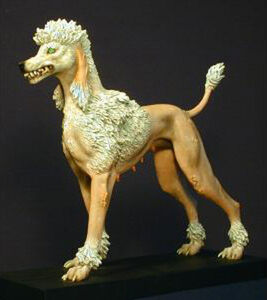 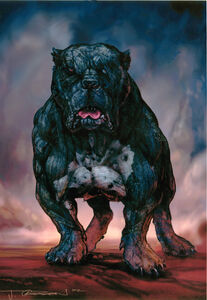 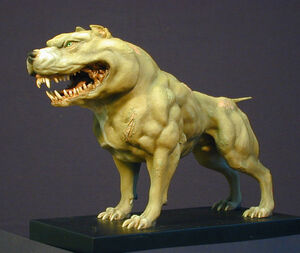 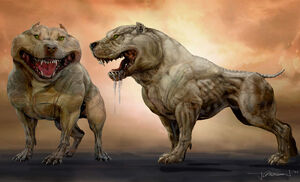 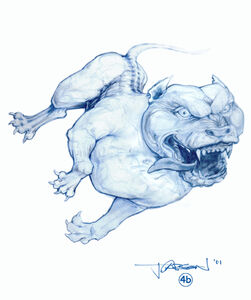 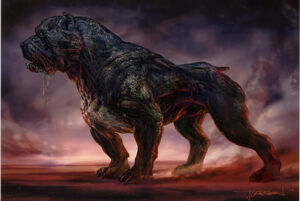 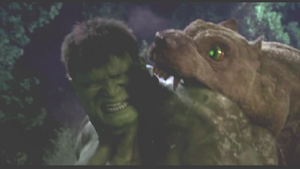 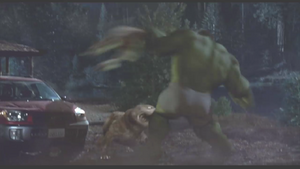 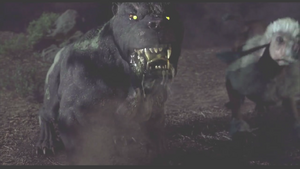 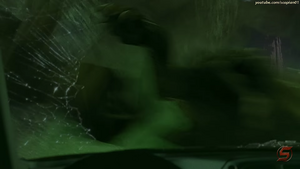 Hulk viciously ripping the pitbull in half 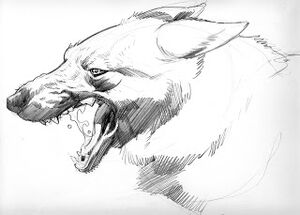 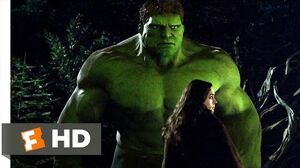