Targeting threats to the Gamma World.

Eliminate threats to the Gamma World.
"Purify" and remake the Earth.

It is voiced by Sayaka Ohara in its regular form and by Akihiro Mayama when mimicking Adel's form.

Gammaizer Fire was originally created by Edith alongside the other 14 Gammaizers to act as a conduit to the Great Eye and allow Adonis to safely interface with it.

When Takeru transforms into Ghost Grateful Damashii the first time to face Jabel, Gammaizer Fire deemed him a threat and teleported from the praying room in the Gamma World to the Human World, possessing Jabel and turning him into Gamma Ultima Fire in order to use him to eliminate Takeru. However, Ghost Grateful Damashii was able to defeat Gamma Ultima Fire with his Grateful Omega Drive kick.

When Takeru and Alain infiltrated the Gamma World to save Makoto Fukami's real body, Gammaizer Fire was summoned by Adel after he killed Adonis and sent by him to eliminate the three Kamen Riders. Leading a team of Gamma Commandos and two Gamma Superiors, Gammaizer Fire chased the two into the human world. It was destroyed by Makoto after he became Kamen Rider Deep Specter, but its pillar quickly reformed in the Gamma's prayer room.

Gammaizer Fire would later merge with Adel alongside the other 14 Gammaizers to transform him into Perfect Gammaizer in preparation for his plans to bring about a perfect world. 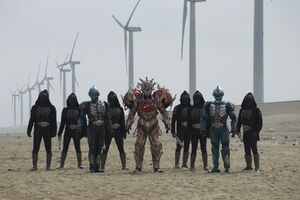 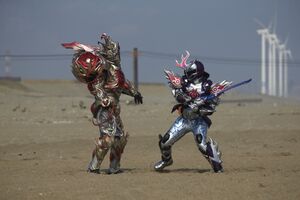 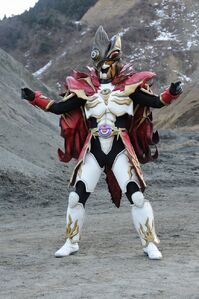 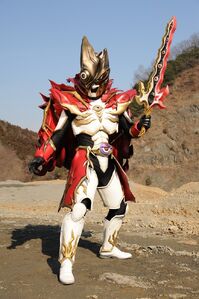 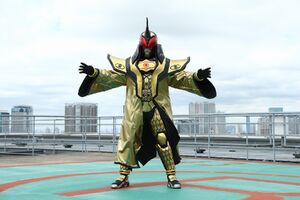 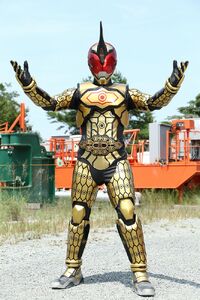 The Great Eyezer without its cloak. 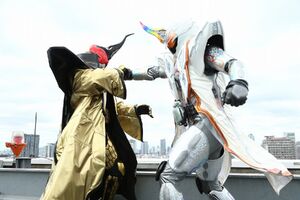 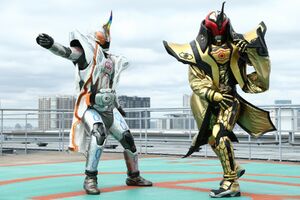