Conquer Godzilla Planet for the Sunerians.

Wipe out all Godzillas from the universe.
Drive humanity to extinction by planting a virus inside them (all failed).

Gamoni is the main antagonist of the 1979 short story A Space Godzilla published by Starlog. She is the cruel general of an alien race called the Sunerians.

Gamoni is the general of the Sunerians and the right-hand to the Sunerian Queen. Despising the residents of Godzilla Planet for being too peaceful, the Sunerians invade the planet and commit mass genocide until only ten thousand Godzillas were left across the cosmos. They then send a fake distress signal to draw the surviving Godzillas to wipe them out to. This includes the Godzilla on Earth, revealed to be a pregnant female named Rozan.

After Rozan returns to Godzilla Planet to give birth to Lilin, the Sunerians capture the newly born Lilin and force him to use his telepathic powers to communicate with the Earth girl Momo to spread a "wave motion virus" to make humanity go insane. Lilin resists, prompting Gamoni to whip him to near death before having two Sphinxes maul him. Rozan eventually regains her strength and fights against the Sunerians to rescue Lilin, but is overwhelmed. Gamoni has her troops scorch Rozan until not a single cell remains for her to regenerate from.

At the climax, the remaining Godzillas revolt against the Sunerians with help of Sphinxes enslaved by the aliens, with Kuunin, the mate of Rozan and father of Lilin, facing Gamoni. Using her extendable neck, Gamoni gains the upper hand and almost suffocates Kuunin to death until Momo's red boots gifted to Lilin emit a melody of her lullaby. With Gamoni distracted, Kuunin rips out her head and tosses it into a sea of sulfuric acid.

Gamoni is a large green creature with a long tail and breasts. She wears golden braces on her wrists and legs. She has sharp claws and talons for feet. Her body is covered in spike-like protrusions. Her face is reptilian, with blue eyes and a long snout. 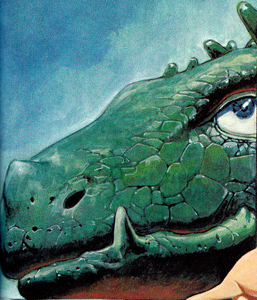 Gamoni's face seen in artwork behind the Sphinx Princess.