Serve as mercenaries wherever there are conflicts.
Ensure the gender-specific roles.
Train to be better combatants.

Humanoid Barbarians
The Gamorreans are antagonists in Star Wars: Return of the Jedi. They are some of the many guards of Jabba's Palace. The Gamorreans are green pig-like humanoids from the planet Gamorr. They are primitive warriors, and are armed with primitive weapons like axes. The Gamorreans live in separate tribes on their planet, but all share the same code of of conduct. This includes fanatical loyalty, and unconditional obedience to the authority over them.

In the movie, there are only nine of them. The most significant is Jubnuk. The nine Gamorrean Guards in Return of the Jedi were part of a group of Gamorreans that had been captured by Han Solo and Chewbacca years before, and sold to Jabba the Hutt. Jabba tricked the Gamorreans by saying that he would let them go if they beat him in combat. The Gamorreans agreed, even when Jabba pointed out that they would have to wear blind folds. When the Gamorreans were blindfolded, Jabba's thugs beat them up. Thinking that Jabba had won the challenge, the Gamorreans swore eternal service to him.

The Gamorreans are savage, violent, dangerous, aggressive and bloodthirsty, as was demonstrated by their behavior toward others, and even each other. Indeed, when their leader, Jubnuk, was being eaten by a rancor, his comrades laughed with the others. It is revealed that the Gamorrean Guards have limits, however, as is demonstrated by their solemn reactions to the fate that awaits the film's protagonists in the sarlacc pit.

Two of them are killed by Luke Skywalker when they tried to stop him from entering Jabba's Palace. Jubnuk was eaten by a rancor shortly afterwards. Another one was killed by Luke on Jabba's sail barge. It is unknown what happened to the other five.

Gamorreans spoke their native language of Gamorrese or Gamorrean. To an individual unfamiliar with the language it sounded like a string of grunts, squeals and oinks. However, it was a complex form of communication well-suited to the lifestyle of the Gamorreans. Although Gamorrese did not have a sophisticated written language it did have a very basic runic alphabet which was used for record keeping, accounting, recording epic stories, and genealogy. Gamorrean genealogy was an extremely complex subject and was studied by a small class of scholar-lawyer sows who were known to memorize genealogical listings, heroic deeds and property transactions. The runic alphabet was only typically used by educated sows although a fair number of boars could read them slowly. There were known to be several variations of the runic alphabet. Since most Gamorreans encountered in the galaxy were males, it was generally considered that the Gamorreans had no written language.

Gamorrean names were simple and were generally a guttural word that the individual made up describing what they would do if somebody made them extremely angry. Most other species did not understand the nuances of their names and therefore did not comprehend the meaning intended. Despite this, the Gamorreans continued the practice, perhaps unaware that it was generally their size and demeanor that frightened smaller opponents and not the sound of their name. 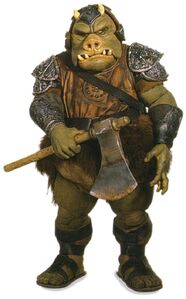