Admirating all of the "motherf--cking" miracles.
Hating ICP.
Trying to juggle.
Failing.

Gamzee Makara is one of the main characters and major antagonist in Andrew Hussie's webcomic, Homestuck. He is a part of a juggalo-esque cult who worships a time-traveling demon, Lord English. While Gamzee can appear silly and harmless while his mind is under the influence of his "sopor slime", he turns into a murderous nightmare when sober.

Gamzee is from an alien race called Trolls. Trolls have gray skin, orange horns (all trolls have different horns to represent their linked Zodiac symbol), and yellow eyes.

When trolls become physically mature, their eyes become the color of their blood, which Gamzee's case, is purple. He has long, messy black hair, two tilde shaped horns, and he wears face paint similar to a clown's.

He is usually seen wearing his black T-shirt, which has the Capricorn symbol printed on the front, and what appears to be spotted pajama pants. After another troll attempts to kill Gamzee, he grabs their hand and forces them to cut three parallel scars on his face.

The capricious extraterrestrial juggalo also receives a purple suit with fake wings, the symbol of Rage and a massive codpiece from a fellow cultist. This suit resembles those worn by God Tiers, who unlock their true powers by dying on Quest Beds.

Gamzee Makara spends most of his time under the effects of sopor slime. During these periods, Gamzee is obsessed with miracles and preaches about them often. He doesn't antagonize anyone, and is shown to be incredibly calm, even when being yelled at. He swears often, types with alternating letters, and avoids most conflicts, preferring to relax and will even share his sopor slime with enemies.

After he becomes sober and abstemious, Gamzee's personality changes completely. He feels the need to subjugate other trolls violently. He actively seeks to kill many of the trolls and does so in an extremely merciless and brutal manner. He also begins to play psychological games with some of his friends to scare and humiliate them. He regains his mellow and hospitable attitude thanks to Karkat.

Even though he is no longer actively murdering people, Gamzee hides in the dark, is far less nice, and avoids most people on the meteor. Despite his abusive and disrespectful nature, Gamzee is also fanatically devoted to his religion and Caliborn. Gamzee also acts capriciously and without an identifiable goal at many points after his murder spree.

Gamzee lived on a planet called Alternia, along with the rest of his species. He belonged to a religion dominated by purple-bloods, who were some of the highest trolls in their caste system. One day, Gamzee and eleven other friends played a game called "Sgrub". Little did they know that as soon as they played it, a destructive meteor shower would begin to destroy their world. All of the players were taken from their world and onto one planet of a set of twelve. Gamzee was sent to the Land of Tents and Mirth and from then on, he and his friends would travel throughout their planets to gain power before they confronted the game's final boss.

The entire alien group gathered together and used their power to defeat the Black King, who led the army that opposed them. Despite being mostly nonviolent throughout his adventure, Gamzee suddenly flipped out in the middle of the battle and used an attack that did more damage to the Black King than any other. After the Black King's defeat, the trolls were about to claim their reward, control over the universe created by their victory. However, that universe's Jack Noir suddenly appeared, forcing the trolls to retreat to a meteor used by the Black King's army to create troops.

On the meteor, Gamzee's friend named Karkat accidentally used cloning equipment to recreate the twelve heroes and their ancestors shortly before they were sent through portals to their proper time. As the group of extraterrestrials spent more and more time on the meteor, Gamzee ran out of sopor slime, which kept him calm and jovial. After he completely ran out of it, becoming sober, and a human compared his religion to the Insane Clown Posse, his true nature presented itself and he became consumed by rage and determined to harm those who's bloodlines were "inferior" to his.

Gamzee sent a message to Karkat warning him of his bloodlust. Karkat told Equius to subdue Gamzee, but Equius couldn't bring himself to harm a troll of a higher caste and was choked to death with his own bowstring. His friend Nepeta witnessed this and pounced on Gamzee, but he grabbed her arm and slashed his own face with her claw before killing her. Gamzee later found two other murderous members of the group, but before a three-way battle royale could break out, Kanaya kicked Gamzee in the bonebulge (the equivalent to a penis in troll anatomy) and launched him elsewhere.

Gamzee took this opportunity to receive a disturbing puppet (Lil' Cal) and plant false letters that brought every remaining troll to the roof. The four trolls prepare to fight Gamzee, but Karkat calms Gamzee down and takes the role of his moirail, the Alternian quadrant of romance centered around moderation of emotions.

Gamzee gets revenge on the human that compared his religion to the Insane Clown Posse by creating the puppet that would haunt his dreams. Shortly after that, the trolls would meet up with that human, Dave Strider, and his sister, Rose Lalonde, after the duo accidentally created the source of Jack Noir's power. The trolls and humans agreed to send the meteor hurtling on a course for another universe to meet up with Dave and Rose's friends. While the species caught up to each other, Gamzee sneaked off and began to collect all the corpses littered around the meteor. Once they arrived in the other universe, Gamzee would use these bodies to create guides of questionable quality for the heroes located there.

Gamzee spends his time on the meteor hiding in the ventilation shafts, avoiding nearly all of its occupants. However, he did begin a romantic relationship with one of the trolls, but one formed of hate (kismesis) and not love. He introduces her to Faygo, and many of his bad habits. About a year after they got on the meteor, Gamzee obtains a fake god tier outfit from a ghost and fellow cultist. After the meteor reaches its destination, Gamzee manages to escape being captured by the empress of the trolls like the others, but somehow ends up in the same place as Rose and his hate-girlfriend.

In the original doomed timeline, a troll named Aranea Serket used her mind control powers to force Gamzee to steal the Ring Of Life and give it to her. After her mission fails, she loses the ring and she and Gamzee die along with everyone else in the ensuing battle. After time retcons, Aranea's plans were never put into action and Gamzee eventually was locked in a fridge by Vriska and then chained up the fridge so that he could never get out.

When fighting against Leprechauns, the fridge Gamzee was in was used as a weapon. People would throw it at the Leprachauns with Gamzee still inside. Gamzee eventually started crying from the trauma. When Jack Noir B2 died, he caused a large black hole that destroyed half of a planet. Gamzee's fridge was sucked into the black hole, but Hussie has stated that Gamzee didn't die, and he is unaware of any timeline where he does.

However he reaches the far future from there, Gamzee secretly raises the alien that would become Lord English, the focus of his religion and the monster behind most of the villains the heroes face. Gamzee gives the young Lord English, who goes by Caliborn, many magical artifacts, computers and foods. After Caliborn starts to play his version of Sgrub, Gamzee presents himself to Caliborn. Caliborn immediately shoots him with a machine gun.  Gamzee survives multiple shootings while serving Caliborn.

In the credits of Homestuck Gamzee appears alongside Caliborn in the dark carnival.

He holds the title of the Bard of Rage, meaning he is "one who invites destruction through Rage" or "one who allows Rage to be destroyed".  His Rage powers are ambiguously described, but he is shown willing a doll into existence to torture a person who angered him.  When angry, he can do more damage than anyone else in his party, including a god.

Unlike many of his friends and enemies, Gamzee is not restricted to one or two types of weapon. While he originally only utilized juggling clubs, he uses other weapons like the Warhammer of Zillyhoo and a bow and arrow. Gamzee also is physically strong enough to break bows in half and use them to choke someone to death. Gamzee has incredible speed, enough to switch an object from someone's hands without them immediately noticing. 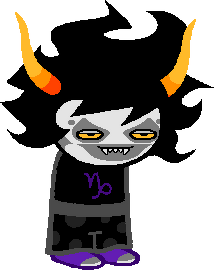 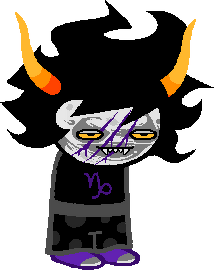 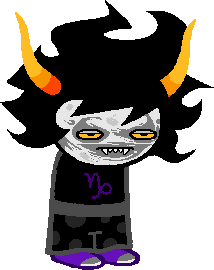 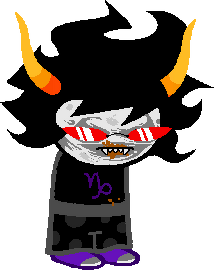 Gamzee (Glasses + Blood in his mouth) 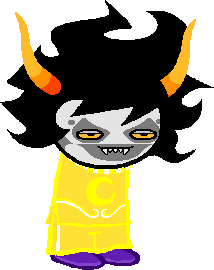 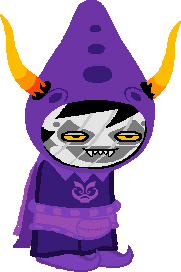 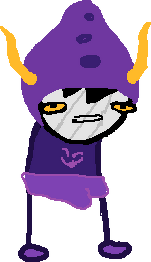 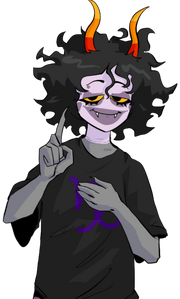 Gamzee in Pesterquest
Add a photo to this gallery
Retrieved from "https://villains.fandom.com/wiki/Gamzee_Makara?oldid=3879408"
Community content is available under CC-BY-SA unless otherwise noted.