Boys (referred to by Sedusa)

Green Green Gang (by the Girls)

Attempting to defeat the Powerpuff Girls

Dimwitted Malefactors
The Gangreen Gang are supporting antagonists in The Powerpuff Girls. They are an antagonistic group of five green-skinned teenagers, named Ace, Snake, Big Billy, Grubber, and Lil' Arturo. Ace is the leader of the bunch. Snake is the second-in-command who hisses like an actual snake. Big Billy is the largest, fattest, and dumbest of the bunch. Grubber cannot speak properly, but he can change his voice around. Lil' Arturo is the smallest member. They are the secondary antagonists of the 2002 theatrical film The Powerpuff Girls Movie.

According to "The Powerpuff Girls Movie", the Gangreen Gang are the first villains the girls ever encountered. Later, they are also the first villains (aside Mojo Jojo) the girls fight after they are welcomed as superheroes. This is when the gang are robbing an old lady who was shopping and eating her groceries. Then after being fought, they are put in jail with Mojo Jojo and Fuzzy Lumpkins.

The Gangreen Gang appeared in the rock musical episode See Me, Feel Me, Gnomey, where (like other villains) they are causing chaos and terrorizing people in Townsville and the Powerpuff Girls when they arrive, they defeating them succeed. Only Ace sings a line (solo). Yet, when it comes to the Gnome, he is responsible for eliminating all the villains, but later, when the Gangreen Gang and all the villains revive, the Gnome loses power.

They are also seen along with all the other villains singing "Why Can't We All Get Along?".

They originally appeared alongside the The Amoeba Boys in McCracken's original short, Whoopass Stew, as the villains The Powerpuff Girls are shown fighting in the introduction.

They are a tribute to the work of late cartoonist Ed Roth, particularly Rat Fink.

Ace sports a long, straight, greasy, slick-back hairdo, a scraggly mustache, a coloured vest-jacket, a pair of shades and even fangs.

When he speaks, he sounds like the typical juvenile delinquent — mean, obnoxious, and disrespectful. He has a nasally Italian New Yorker accent.

As the Gang's smartest member, he is the instigator of most of their antisocial activities, and he does possess a certain charismatic charm that allows him to sweet-talk people who ought to know better, such as Ms. Keane and even Buttercup in the episode Buttercrush. His full name is Ace D. Copular.

In "Power Lunch", he had cryokinesis (referencing his coolness), the ability to generate ice and snow, similar to Blossom's ice breath. He is also the best looking one of the gang.

He was voiced by Jeff Bennett, who also voiced Big Billy and Grubber.

Snake is the closest friend of Ace and the overall second-in-command of the Gang. He has shoulder length greasy black hair with black lips, pointy nose, skinny body, a kangol hat turned backwards, and a snake-like voice. Ace sometimes punches Snake if Snake says something out of line.

In "Power Lunch" his special ability was stretching long distances and strangling people like a real snake. His real name is Sandford D. Ingleberry.

He was voiced by Tom Kenny.

Big Billy is a hulking big fat colossus with a shock of red hair covering the top half of his face, and a single big blue eye who acts as the Gang's muscle. Big Billy's height is 6'11", helping add to his position as the muscle man of his friends. Though he does at times display a childlike innocence, he mostly just does the bidding of his more savvy, ruthless, and vindictive friends. In the episode "School House Rocked", it is revealed that his real name is William W. Williams and that he is a Cyclops.

Big Billy loves to eat and will gobble more junk than the rest of the gang. In one episode, he was saved by the Powerpuff Girls and began following them everywhere out of sheer gratitude, but eventually he became more of a hindrance then a help and he returned to the gang, in which they plan on getting revenge on the Powerpuff Girls, even almost killing them. In "Power Lunch", he can transform into a rock, referencing his intelligence.

He was voiced by Jeff Bennett, who also voiced Ace and Grubber.

A malevolent Mexican midget with straight hair swept forward over one eye, Li'l Arturo seems to take the most amusement from the Gang's activities.

He sounds very much like Señor Wences. He carries around a switchblade-styled comb he refers to as his daughter and calls "Maria". He has a rather prominent underbite. His full name is Arturo De La Guerra, which is Spanish for "The Art of War", a reference to the work of Chinese philosopher Sun-Tzu. He is the smallest of the Gang. In "Power Lunch", his superpower is super-speed, referencing his energetic personality.

He was voiced by Carlos Alazraqui in his debut episode, and Tom Kenny in other episodes.

Grubber is physically the Gang's most grotesque member - untidy hair, an enormous chin, ragged, grubby clothes, a long tongue hanging out, and protruding eyes, resembling a Ed "Big Daddy" Roth cartoon. He also appears to be mostly mute, communicating instead through blowing a raspberry. However, he does occasionally demonstrate unexpected talents, such as playing the violin, speaking eloquently or performing impersonations (at first, they were so obvious it was a wonder how he fooled anyone, but later he was able to do them perfectly), and appears to be smarter then he looks. His full name is Grubber J. Gribberish. In "Power Lunch", he can do loud and supersonic belches, referencing his rebarbative and grotesque nature.

He was voiced by Jeff Bennett, who also voiced Big Billy and Ace. 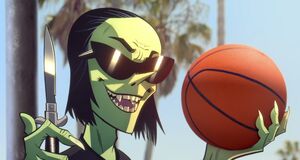 The Gangreen Gang Leader Ace as he appears in the Gorillaz music video "Humility". 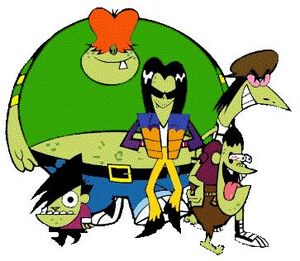 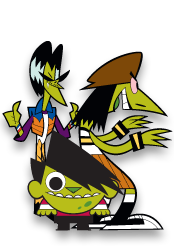 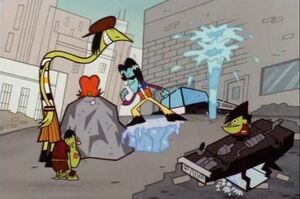 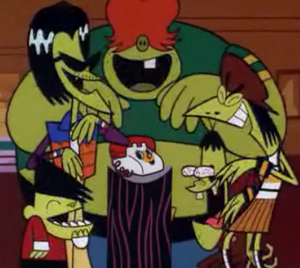 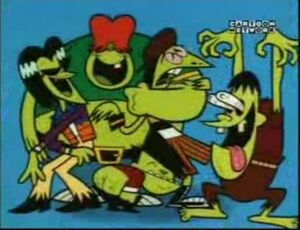 "Unprincipled" by the Narrator. 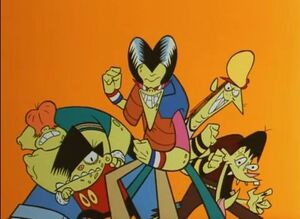 An early version of the Gangreen Gang. 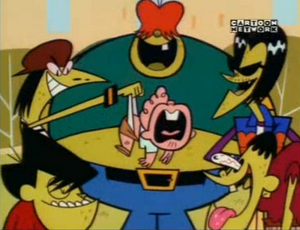 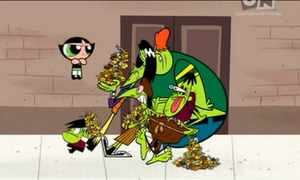 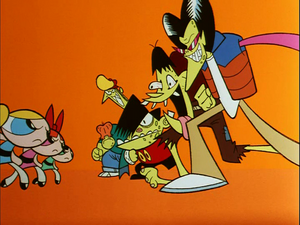 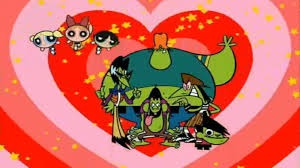 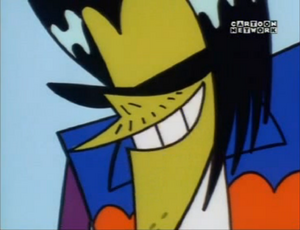 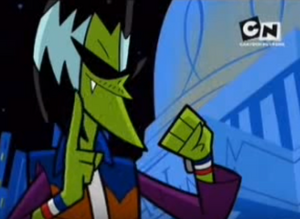 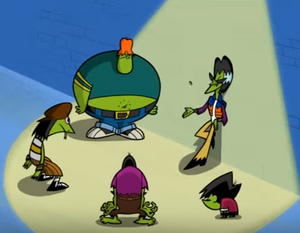 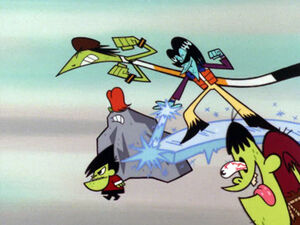 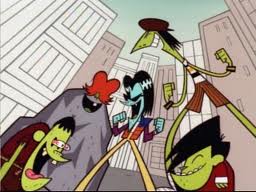 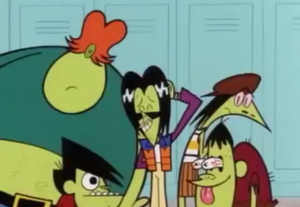 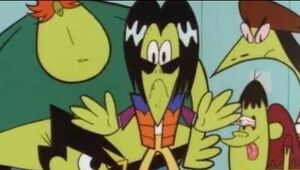 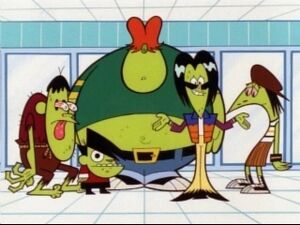 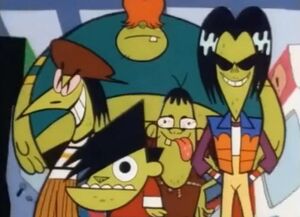 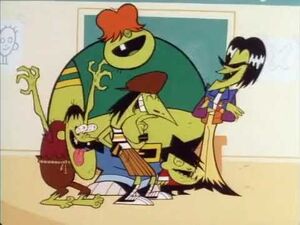 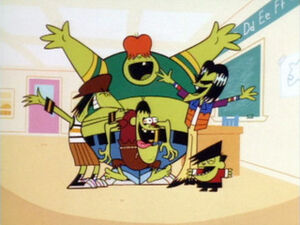 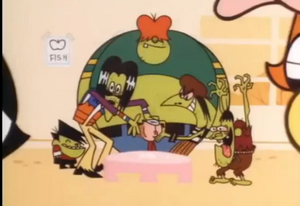 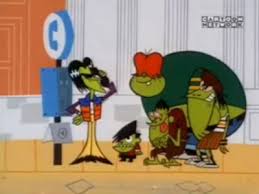 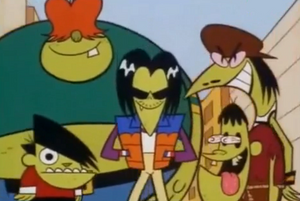 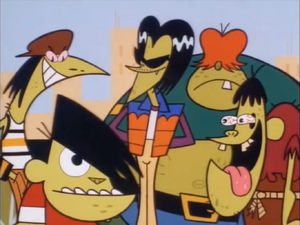 Retrieved from "https://villains.fandom.com/wiki/Gangreen_Gang?oldid=3838309"
Community content is available under CC-BY-SA unless otherwise noted.