Obtain the Fire Emblem.
Conquer the world (both failed).

Gangrel is the dictatorial king of Plegia and a major antagonist from the videogame Fire Emblem Awakening.

He was voiced by Sakamaki Manabu in the Japanese version, and Anthony Jenkins in the English dubbed version.

Once an orphan whose mother was killed by bandits, Gangrel is a cruel and evil man who rose to become King of Plegia despite his background. This was due to the support of Validar and the Grimleal who felt Gangrel would serve their purpose. Gangrel quickly ran Plegia into the ground and turned it into a dystopia where worship of Grima was necessary. Those in Plegia's military were kept in line by Gangrel's threats of killing their families.

Hating the whole world due to his mother's death and enthralled by the thrill of war, Gangrel attempt to start a war with Plegia's neighbor, Ylisse, and its young queen Emmeryn.

Wanting Ylisse to look like the aggressor and make the first move, Gangrel continually provokes Ylisse by disguising his soldiers as bandits and having them raid Ylissean villages. Furthermore Gangrel attempted to play at victim, by using Ylisse's past crusade against the Grimleal for propaganda, despite Gangrel's secret hatred for the Grimleal.

Gangrel even attempts to kidnap Maribelle, a Ylissean noblewoman. who he accuses of being a spy sent to harm his rule, while Maribelle states that the Plegians had pillaged a village in her father's domain. Gangrel then states that it was simply a bandit problem in Ylisse, though Emmeryn believes Maribelle over Gangrel. Gangrel then demands the Fire Emblem in return for Maribelle's safety. Emmeryn refuses andGangrel orders several Plegian soldiers to take it by force, and soon declares war after Chrom kills of them.

Frustrated after a failed assassination of Emmeryn, Gangrel gains his chance at revenge when Emmeryn's mentor betrays her to Plegia, allowing him to capture Emmeryn for a public execution. Once again attempting to vilify Emmeryn for propaganda purposes, Gangrel brings Emmeryn to the highest point of Plegia, while loudly announcing her death. Whilst Chrom offers to give the Fire Emblem, Emmeryn takes matter into her hands. Telling the Plegians to stand up for themselves against tyrants like Gangrel, Emmeryn then commits suicide herself by jumping off the cliff.

After this, the Plegians turn against Gangrel's oppression, even men in his own army deserting in masse. Left with only a small army of thugs after the majority of his army rebels against his abuse and even the Grimleal abandoning him as a lost cause, Gangrel faces Chrom on his own. Taunting Chrom on the battlefield about his sister's death only enrages Chrom and Gangrel is slain, repeating his nihilistic worldview as he dies.

According to a SpotPass chapter, Gangrel survived this for unexplained reasons and became a slave of the pirate, Zanth. Chrom kills Zanth and convinces Gangrel to join up against Grima. In playable Gangrel's ending, he either becomes a beggar or found another country to ruin. Either way, it is generally agreed Gangrel died in a ditch not long after.

If Gangrel marries the female player Avatar, however, his death isn't mentioned. The canonicity of this SpotPass chapter and Gangrel's survival is questionable.

Gangrel is an antagonistic Mirage who resides in an Idolasphere of Shibuya, Illusory 106 and has taken control of fashion photographer Nobu Horinozawa. After Nobu is able to break free from his control thanks to Tsubasa Oribe, he fights the party, but is defeated.

Gangrel later reappears in Illusory Dolhr, having been revived by the Shadow Dragon Medeus, but is defeated once again.

Gangrel appears as a primary attack-type spirit whose ability increases electric attacks. His spirit battle is against Wolf O'Donnell and Bayonetta (representing Aversa) on the Ω form of the Find Mii stage, with increased attack power. Only Wolf has to be defeated to win. 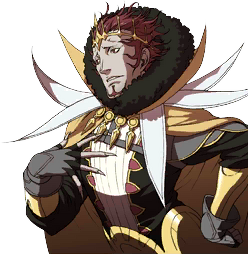 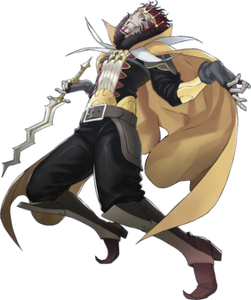 Retrieved from "https://villains.fandom.com/wiki/Gangrel?oldid=3999465"
Community content is available under CC-BY-SA unless otherwise noted.