The Gangster is the protagonist, anti-hero and narrator of the 2000 British crime film Gangster No.1.

Paul Bettany, who also played Silas in The Da Vinci Code, Bill Cox in Firewall and Dryden Vos and in Solo: A Star Wars Story, plays the Young Gangster, with the older gangster (credited as Gangster 55) played by Malcolm McDowell, who also played Alex in A Clockwork Orange, Caligula in Caligula, Tolian Soran in Star Trek: Generations, Admiral Geoffrey Tolwyn in the Wing Commander video game series, Lord Maliss in Happily Ever After, Andrej Evilenko in Evilenko, Sinclair in Home Alone: The Holiday Heist, Daniel Linderman in Heroes, Colonel F. E. Cochrane in Blue Thunder, Kesslee in Tank Girl, Tower in Phineas and Ferb, Arkady Duvall in Batman: The Animated Series, The Shaman in the Aladdin TV series, and Marcus Kane in Doomsday.

In 1968, the young gangster came to the attention of influential London gangster Freddie Mays, who recruited him into his gang as an enforcer. The Gangster is eager to please Mays and proves his loyalty through creative ways of murder. However overtime the Gangster becomes obsessed and envious of Mays' glamorous and successful lifestyle and also takes a dislike that he gets engaged.

When discovering Freddie's rival Lennie Taylor is planning to have him killed, The Gangster withholds the information and even kills another gangster in their gang with a hatchet to prevent him telling Freddie. The Gangster watches in sadistic glee when Freddie is shot and beaten by Lennie and his gang, and Freddie's fiancee's throat is slashed. The Gangster goes round to Lennie's flat later that night and breaks in and shoots Lennie in the knee, then brutally tortures him with numerous tools such as a hatchet.

Freddie is charged with the death of Lennie and sentenced to 30 years in prison and the Gangster takes over his empire.

Over the next 30 years the Gangster begins building up the empire, and carries out armed robberies, gets into gambling and drug dealing and by the 1990s has over 300 men in the crew.

The Gangster loses his grip on sanity upon seeing that Freddie is happier with nothing than he is with everything, and ends up the roof declaring himself "number 1" before jumping to his presumed death. 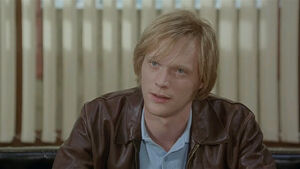 The Gangster first being recruited in 1968. 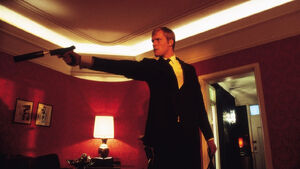 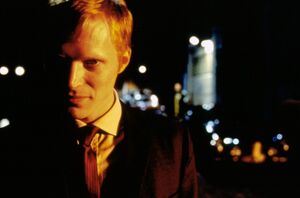 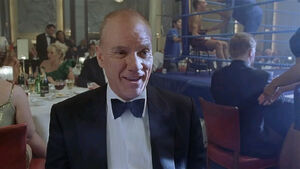 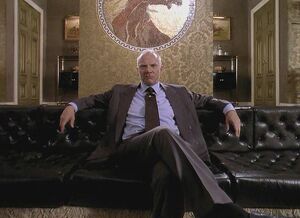 The King.
Add a photo to this gallery
Retrieved from "https://villains.fandom.com/wiki/Gangster_(Gangster_No.1)?oldid=3742066"
Community content is available under CC-BY-SA unless otherwise noted.