Leader of the Dark Ones

Use the Shinenju to destroy the human world and the Soul Society.

Evil Leader
Ganryū (in Japanese: 巌竜, Ganryū) is the evil leader of the Dark Ones and the main antagonist of Bleach: Memories of Nobody.

He was voiced by Masashi Ebara in the Japanese version, and Troy Baker in the English version.

Ganryū, along with the rest of the Dark Ones, were a part of the Fallen House of Ryodoji. 1000 years ago, they were exiled to the Dangai Precipice world, a dimension between the human world and the Soul Society. However Ganryū and his cohorts survived within in the Dangai and resided there for many years. During their time there, they discovered the Blanks, souls that had been unable to transmigrate to become wandering spirits. Ganryū and the other Dark Ones learned how to harness the Blanks as a source of power and found out about the nature of the creatures. The one thing about the lost souls that particularly interested Ganryū was the Shinenju, the fusion of the Blanks’ lost memories. The Dark Ones planned for their revenge against the Soul Society and eventually found their way to the valley of Screams.

Ganryū went to the human world to find the Shinenju, planning to use it to destroy the Dangai and make the human world and the Soul Society collide, destroying each other. He, along with Jai and Mue, hid themselves in a large pack of Blanks that appeared in Karakura Town. It was there that Ganryū found the Shinenju, which had taken form as a Shingami named Senna, who took out the Blanks. However the exiled Shinigami was spotted by Kon, before he and his minions vanished.

Ganryū then ordered his minions to bring Senna to him and to use force if they had to. However they returned empty-handed and their leader went with them in their second attempt to capture her. They arrived at her location, just as the forces of the Gotei 13 had come to get Senna. While the Dark Ones took on the Shinigami, Ganryū watched until Senna attacked him, but he easily

stopped her. When Ichigo Kurosaki tried to stop him with his Bankai, the exiled Shinigami thrust Senna’s Zanpakuto into him, bringing him down. Captain Jushiro Ukitake identified Ganryū and his cohort’s armor as being that of the exiled House of Ryodoji. But their leader just said he didn’t know that clan and said they were of the Clan of Darkness, they were the Dark Ones. Ganryū and his cohorts then headed back to the Valley of Screams with Senna and prepared to place her at the center of the dimension to act as a focal point for the Blanks. As they did so, Ganryū explained to Senna the Dark Ones’ history and their motivations. He also explained as well as the fact that the number of Blanks was constant and when they reached a certain amount, they were drawn together in the Valley of Screams.

Final Fight with the Shinigami

Ganryū and the Dark Ones placed Senna in the center of the valley, drawing the Blanks to her and restraining the dimension. This began to destroy the Dangai, but

their plan was interrupted by Ichigo, who engaged Ganryū and the Dark One leader was able to fight him off easily. The exiled Shinigami decided to leave defeating Ichigo to his subordinates and entered the enormous tree-like structure that was generated by Senna and the Blanks fusing. But while Ichigo’s Shinigami allies took on the Dark Ones, he went after Ganryū. After Ichigo released his Bankai, the two began battling each other with the exiled Shingami winning the fight at first. After eventually pinning his opponent down, Ganryū told him of the suffering his clan had been through and the hatred they felt.

He then stated their plan was to bring about justice, but Ichigo angrily pointed out the Dark Ones leader’s lack of regard towards Senna and how she felt about it. Despite the fact she was the Shinenju, she was a living being, however Ganryū saw no error in his actions. The two clashed one final time with both of them using their full power, but Ichigo won, slashing the Dark Ones leader in half and he dissolved into gray smoke.

Ganryū possesses high spiritual power, able to match a Shinigami using Bankai without a Zanpakuto. Like all Dark Ones, he can manipulate the Blanks in a variety of ways, namely various weapons. Ganryū possesses great strength and high skill in Shunpo, a technique that lets him move extremely fast. He also has great swordsmanship skills and has demonstrated some sort of invisibility power. 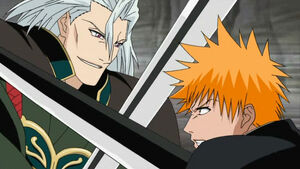 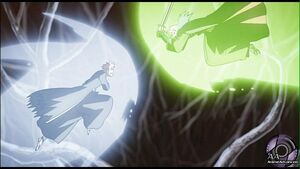 Ganryū and Ichigo clashing for the last time.