Obtain the legendary GaohLiner and use it to destroy all time

Gaoh is a thief-king who targets Time Trains and a renegade Kamen Rider who wishes to take over all of space-time by obtaining the legendary GaohLiner to destroy all time as he was fed up with it. He and his Imagin followers took camp at May 2000 to await his plan to come to fruition, by sending the Molech Imagin to 2007 to set the pieces up.

Amadum, the ruler of the world within the Magic Stone with a penchant for dressing as past villains fought by Kamen Riders, appears in Gaoh's costume in Neverending Story.

Kamen Rider Gaoh is the only Kamen Rider in Kamen Rider Den-O to only have one form, called Gaoh Form and no Imagin partner (similar to Zeronos Altair Form). It is visually based on a crocodile and is similar to Den-O Sword Form. Upon transforming, Gaoh says "I will devour everything!".

The Gaoh Belt allows for Gaoh to become Kamen Rider Gaoh. It uses a Rider Pass and SetTouch system, just like the Den-O Belt. However, it uses the gold-plated Master Pass instead. How Gaoh came to obtain the Gaoh belt and the knowledge of its functions is never disclosed, although it could simply have been summoned with the Rider Pass.

The GaohGasher is Gaoh's only weapon and only has a Sword Mode. It is visually similar to Den-O's DenGasher Sword Mode, except it has a gold, serrated blade. He uses the weapon for his Full Charge attack, the Tyrant Crash, which is similar to Den-O Sword Form's Extreme Slash attack.

The GaohLiner was built by the king of an ancient civilization. In the time of said civilization, it was referred to by its actual name, God's Train, due to having the power to control all of time, able to easily erase Singularity Points. Due to the vastness of its power, the king sealed the GaohLiner away within the time of its creation. Gaoh sought use of the train, tricking Yukimura into unsealing the cave in which the GaohLiner was sealed in. Upon its release, Gaoh wreaks havoc upon the feudal village before heading into 1988, intent on erasing Ryotaro for having interfered. The GaohLiner battles Zeronos Vega Form until Gaoh attempts to escape in it, engaging the DenLiner/ZeroLiner combo in a battle between the time-trains and is destroyed by them, undoing the damage caused by it.

GaohLiner Kiba is the first car. In Battle Mode, it has jaws like a crocodile, which can not only bite through targets but fire a powerful energy beam.

GaohLiner Kiba is followed by several other train cars which do not have any offensive capabilities. They are black, like Kiba, and have two rows of bronze ridges running along the tops of the cars similar to a crocodile's scales on its back. Within each car is a barrage of missiles that are shot at an enemy.

Gaoh appears as a monster in the video game All Kamen Rider: Rider Generation 2.

Gaoh will appears as a one of movie Kamen Riders in Kamen Rider: Battride War II. Hiroyuki Watanabe also reprises his role. 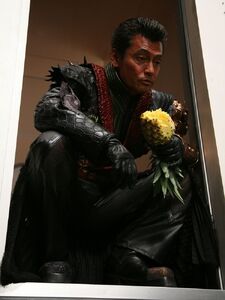 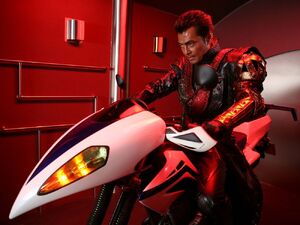 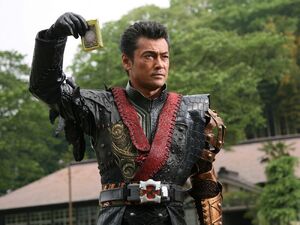 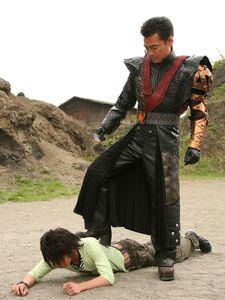 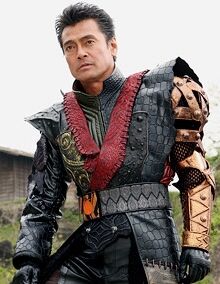 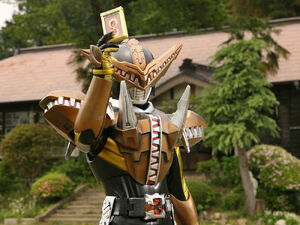 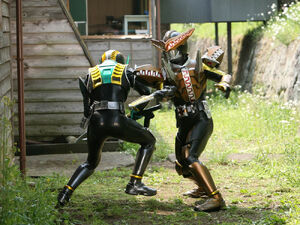 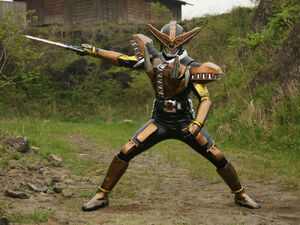 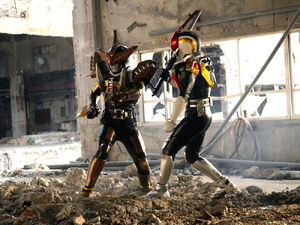 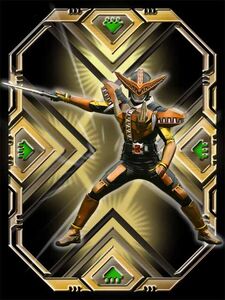 Retrieved from "https://villains.fandom.com/wiki/Gaoh?oldid=4258742"
Community content is available under CC-BY-SA unless otherwise noted.