Guardian of the entrance to Blighttown

Devouring everything it comes across.

Prevent anyone from entering Blighttown.

Kill and eat the Chosen Undead.

The Gaping Dragon is a minor antagonist and optional boss in Dark Souls.

Once a regular Stone Dragon and distant descendant to the ancient Everlasting Dragons, the Gaping Dragon was obsessed with its hunger, devoting itself to devouring so much that its entire body was mutated into a massive gaping maw. The emergence of life corrupted it, bringing it emotion and desires. It guards the entrance to Blighttown in the bottom layer of the Depths, and has since eaten everyone that has attempted to reach Blighttown to ring the Bell of Awakening hidden away by Quelaag.

When the Chosen Undead enters the bottom layer of the Depths in search of the key to open the gates to Blighttown, the Gaping Dragon emerges from a large pit in a massive submerged arena, thrilled for its next meal. It attacks by swiping its tail or legs, stomping, punching the ground, or by slamming its body on the ground, leaving it temporarily stunned with its teeth stuck in the ground. While grounded, it can charge towards the player. It can also use its wings to lift up in the air and attempt to crush the player, or at least adjust itself to point towards their location. If it points its stomach down after appearing to regurgitate, it expels an acid that covers a large portion of the arena. Standing in the acid deals little damage, but degrades equipment durability the longer the player stands in it. Lastly, if the player is near the front of the dragon while its maw is pointing up, it can grab the player with its arm and drop them in its mouth, inflicting massive damage as it crunches on them before spitting them out. It is possible to spam the attack button to escape from its mouth quicker.

Once the Gaping Dragon goes down, it drops the Blighttown Key and 25,000 souls. 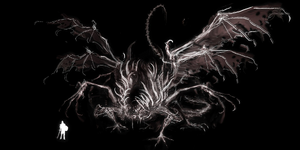 Concept art for the Gaping Dragon. 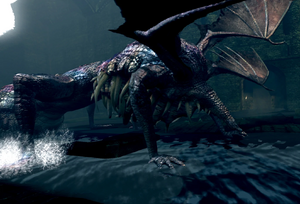 The Gaping Dragon emerging into the Depths. 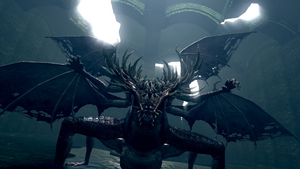 The Gaping Dragon roaring at the Chosen Undead. 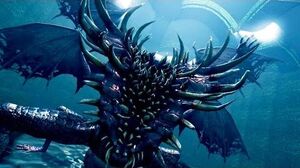 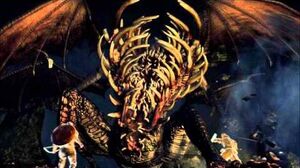