Mechanically-Modified Ninja
Garō (in Japanese: 我婁, Garō) is an antagonist in Boruto: Naruto Next Generations. He was an outer member of Kara. Like Ao, Garō was modified with ninja technology.

Garō was shown to have a harsh interest with retrieving Kawaki. Given their past, the two had a bad relationship and Garō felt that he can dominate and retrieve Kawaki without any problems. In his battle against Kawaki, he underestimated him and used his powers to harm him as much as he can. Garō was easily ill-tempered and had a habit of ranting.

Garō joined the Kara in the past as an outer member and met Kawaki and knew Delta. Both Garō and Kawaki resented each other greatly, with Kawaki having torn off his jaw and even indicated he hardly apologized for the disfiguration. When Kawaki escaped from Kara, after Ao's death and Koji taking too long, Delta took Garo with her to bring back Kawaki.

Garō confronted Kawaki and told him that he was after him to bring him back while promising cruel beatdown in revenge for his destroyed jaw. The two immediately got into a fight with both the Leaf ninjas and Koji and Delta spectating. The two fought for some time with Kawaki able to keep up in his fight against Garō. However, Garō was able to overwhelm Kawaki and mocked him for how weak he had become due to his injuries. Kawaki was able to activate his Kama seal which Garō did not expect. Despite Garo's pleas, Kawaki with his curse seal all over him easily defeated Garō and detonated a powerful amount of energy on Garō's head while mocking him for how the tides had turned. 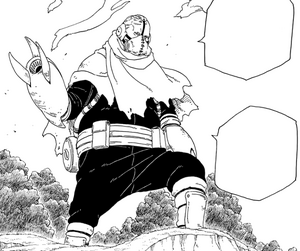