Kamen Rider OOO: Wonderful: The Shogun and the 21 Core Medals

Become the King of the World that raises from the old one's ashes.

Gara is one of the four alchemists that created the Core Medals along with the Greeed for the First Kamen Rider OOO eight centuries ago and the main antagonist of Kamen Rider OOO: WONDERFUL Shogun and 21 Core Medals.

Gara and three other alchemists were ordered by the first OOO to help him achieve godhood. Taking an interest in this request, Gara accepted hoping to gain some of the power. However, after the time the orange Core Medals were completed, the king betrayed the alchemists and had them turned into Cell Medals.

Reawakened eight centuries later due to Kosei Kougami (the king's descendant) unearthing his tomb in Germany, Gara flips his tower over from Germany to a part of Tokyo while taking Satsuki Wakaba's body to replace his old one. Appearing before Kamen Riders OOO and Birth and the Greeed, he takes the Core Medals and then causes three more time distortions, one of which leads into the past to the city of Edo. By using the Cell Medals his Bells gather from humans, Gara plans in using the accumulated human desire to destroy the world and become the King of the World that raises from its ashes. But to become the "true OOO", Gara sends his knights and the Nue Yummy to Edo to obtain both Ankh's Core Medals and the purple Core Medals to complete his plan.

After his plan to use human desire fails, Gara reveals his Greeed form as he personally fights against OOO when they start to become a nuisance. During the fight, OOO manages to free Satsuki from Gara's body before Kamen Rider Fourze arrives to help, the Kamen Riders defeating Gara with their respective signature weaponry. However, Gara takes this chance to take three of the purple Core Medals from Eiji completing his collection of Core Medals and absorbing them to access his true Mega Greeed form called Gara Dragon. However, with the Greeed and Maki giving their Core Medals to him, OOO destroys Gara by accessing all of his Combos through Gatakiriba Combo's copy ability and using all their Scanning Charges in conjunction with Birth's Breast Cannon.

Amadum, the ruler of the world within the Magic Stone with a penchant for dressing as past villains fought by Kamen Riders, appears in Gara's costume in The Kamen Rider Rings.

Gara possesses a superiority complex, seeing himself as the only one worthy to have the Core Medals and be king. He also sees the world as rotten with desire, wishing to destroy it and rebuild it in his own image.

Gara was an alchemist considered talented amongst the others that created the Core Medals which in turn created the Greeed. Gara himself created the exceptionally powerful reptile orange Core Medals. Through the Cell Medals, Gara can possess bodies in place of the one he lost. He is also able to create the Nue Yummy and other homunculi, like the Bells and the Knights with Cell Medals and a chemical he keeps by his side.

Gara can also manipulate space-time with a device that weighs a person's desires through Cell Medals flipping an entire area into another area or era. He demonstrated the ability to forcibly take the Core Medals from Kamen Rider or Greeed, and extend his arms. Using Cell Medals Gara is able to assume his Inhumanoid Form based off the Greeed. Gara can access a true powerful form known as the Gara Dragon that requires 21 Core Medals, one complete set of three from the seven known Core Medal types. 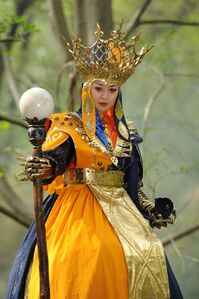 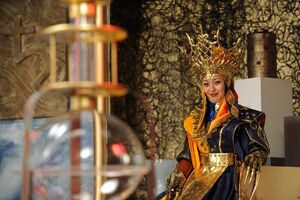 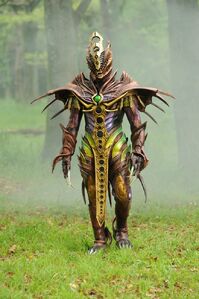 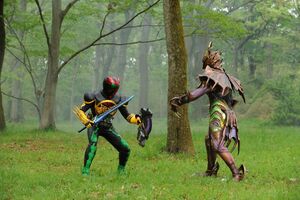 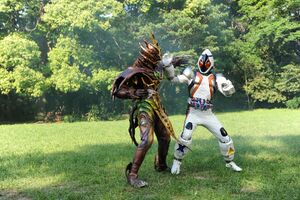 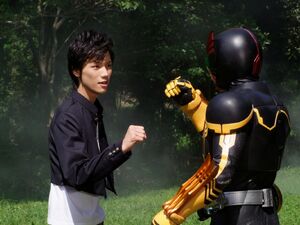 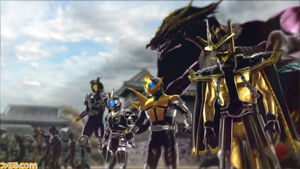 Gara Dragon along with the movie villains. 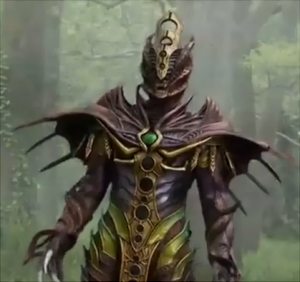 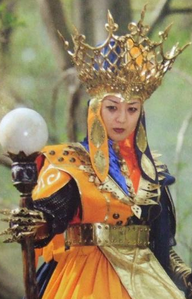 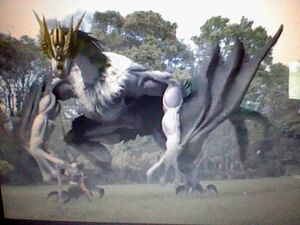 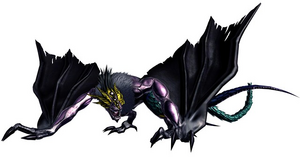