Stealing some items from stores.

Garatt Nargo is a cat-themed Gangler Monster who is one of the four antagonist alongside Ruretta Gerou, Namero Bacho and Rabroom Jaws and the main antagonist for episode 1 and 2 of the 2018 TV series Kaitou Sentai Lupinranger VS Keisatsu Sentai Patranger. He is also equipped with a lighter-like treasure called Allume-moi.

He is voiced by Wataru Takagi who previously voiced a Bin Banki, Hidou of the Swift Runner, Nanonanoda, Copyloid, Debo Kantokku, a Vacuum Shadow and Gaburio.

Garatt Nargo has a blue cat head with red ears, black teeth and blue mouth, his Gangler safe is on his blue chest and he has a grey belly, his shoulders are blue and red cat plaws, on his blue arms where white fish bones, the fish tail makes the grey cat claws (Sometimes he has 4 arms), he has a black and blue collar with a red gem on the middle on his blue thighs, his legs are blue yelling cat heads, his feet are blue and grey cat feet and the top of the feet are red and blue teeth that are the blue cats lower jaw.

In the first episode Garatt Nargo made his first appearance in the back world where he was attending Dogranio Yaboon's 999th birthday party and since his boss was going into retirement he'd got motivated when Dogranio said "That if anyone can invade the human world they’ll be the next boss of the Ganglers."

A while later he was at his base with a bunch of Porderman explaining his plan to become the next boss is by stealing the all the jewels and gold from every store in japan however unknown to him the Lupinrangers were hiding in the air duct eavesdropping onto this plan of his, but once the Lupinrangers revealed themselves he sends the porderman to attack them, but they were all destroyed, so he'd attack them by using his fire-based attack on the lupin rangers, however when they were about to steal his treasure he used his other ability to hold Kairi's friends as a hostage, but with quick thinking Kairi then shoots the ceiling causing Garatt to throw the two hostages away in order to defend himself. After that he was seen alive and he battle the Lupinrangers outside, but before the lupinrangers are about to steal the treasure from Garatt they were interrupted by the arrival of the Patrangers.

In the second episode, Garatt Nargo was still outside now battling with the Lupinrangers and the Patrangers, but during the confusion between the two teams he'd retreats from the battle.

He appeared the second time at a mall still prompting to steal every item in Japan, but his mayhem was the stopped by the arrivals of the Lupinranger, so he would battle the rangers and he was about to use his extra arms to prevent the rangers from stealing his treasure, but the duo prevented that by using the long claw arms, making it an easy access for Kairi to unlock Garrat's safe (which his password is 2-1-5) and got the lighter called Allume-moi (which translate as "Turn me on") and once the lupinrangers successfully stolen the treasure from Garatt, he was then taken down by Patren Ugou's One Hit Strike. However due to Goche Ru Medou using the Syringe-like treasure called Gros Calibre Garrat was then enlarged and he'd battle the Lupinkaiser after that he was then destroyed by this finisher called LupinKaiser's GoodStriker: Rapid-Fire Down You Go Shot. 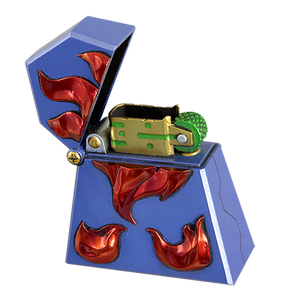 Retrieved from "https://villains.fandom.com/wiki/Garatt_Nargo?oldid=3517677"
Community content is available under CC-BY-SA unless otherwise noted.