Transform the Zenkaiger's dimension into a world of garbage.

Defeat the Zenkaigers (both failed).

He was voiced by Keiji Himeno, who also voiced the Great Garbage World.

The Garbage World made his first appearance as he litters the street with some garbage that can be found in the dump. He was spotted by Vroon as he was heading back to base from the library.

After the intro, he came face to face with the Garbage World as he transforms and battle him. However, during the fight, it didn't look to well because of the mess, as Vroon kept hitting random stuff and slipping on carboard. Thankfully, the rest of the team showed up and helped Vroon battle against the Garbage World. After that, he makes a get away as he dives through the pile of trash as he further plans to pollute the world.

However, Vroon was so tired from all of the cleaning that he won't be able to fight the Garbage World on his own, but the heroes arrived and open fire at the Garbage World. A while later, he summons a couple of Kudakks to help him battle the team. As this goes on, the trash has been is still affecting the minds of humans, which gives him the opportunity as he kicks some trash bags at Kaito, Juran, and Gaon, trapping them as each one has been marked with "food waste", "bulk trash" and "non-burnable trash", thus leaving Vroon to battle the Garbage World on his own.

Thankfully, Magine came to save the day as she charged pass the Garbage World and dug Vroon out from the pile of trash. After that, they began a "trashy" roll call and then fought the Garbage World once again with the materials that they have around them. He tried to make a get away by diving into another mound of trash, but thanks to Magine's magic, she'd easily found him by doing a magic show and then they used Sentai Gear #36 as Magine does a dash attack and Vroon made a ground pound as it sends the Garbage World flying in the air. Once he made contact to the ground, he was then destroyed by the Zenkai Finish Buster technique, causing all the garbage he made to be wiped away. 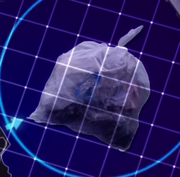