Leader of the Teenage Dragon Gang

Bullying Spike and his friends (both formerly).

Initiate Spike into his Gang (mostly just to pick on him; formerly).

Destroy all of the Phoenixes.
Become a Dragon Lord and take over half of Equestria and burn the rest (both failed).
Get revenge on Spike and his pony friends (formerly).

Garble is a red male dragon who lives in the Dragonlands, and a former recurring antagonist-turned-supporting-protagonist in My Little Pony: Friendship is Magic. He is the former arch-rival of Spike and the leader of a gang of teenage Dragons. He is also the older brother of Smolder.

He was voiced by Vincent Tong, who also played David Bringdown in Disney's Phineas and Ferb, and the Mandarin in Iron Man: Armoured Adventures.

Garble was raised in the Dragonlands, and was in his late teenage years during Season 2. His past is relatively obscure, however, what is known is that he was highly respected throughout the teenage dragons, and is a very leader-type dragon.

Garble appears as the main antagonist of the Season 2 episode "Dragon Quest". He is first seen fighting another dragon. As Spike confronts the gang, they start mocking him for being such a young dragon. Garble challenges Spike to a belching contest to prove he is not pathetic, but he ends up coughing a letter from Princess Celestia, and Garble throws it in the lava. This is a sign that the teenagers have forbidden contact between ponies and dragons.

He then challenges Spike to tail wrestling. He wrestles "Crackle's cousin', who is really Twilight Sparkle, Rainbow Dash, and Rarity in disguise. Throughout the quest, Spike would not know that the pony friends the dragons disapprove of are close behind, and that it is only a matter of time before he is discovered.

Garble declares Spike the winner after their "wrestle", and he begins to take back his mocks at Spike and calls him a "real dragon." When Spike starts acting cocky, Garble chooses another dragon for Spike, one of which has an enormous and dangerous tail. Spike gets thrown to the wall and loses.

Afterwards, he challenges Spike to a game of "King of the Hoard", where he must knock Garble and other dragons off a pile of gems to be on the top. Other dragons fight their way up to the top too, but Garble throws each off to keep his place. Spike accidentally pushes Garble over, and he falls off the pile. Spike, after declaring himself the winner, falls off the pile and Garble calls it another fail.

Garble challenges Spike and the other dragons to one last game: Lava Cannonball. He announces that whoever makes the biggest splash is the ultimate dragon. He dives first, followed by more dragons. Garble torments Spike for being too afraid to jump off, but he ultimately does. Spike makes a belly flop onto the lava and impresses Garble and the other dragons for living through the belly flop, calling him a "tough little dragon".

For his effort, Garble dubs Spike "rookie dragon", and he accepts him as one of their own. He gives Spike a noogie as an initiation ritual, and has a party to celebrate Spike's addition to their horde. Garble says Spike should stay, and learn what he can do as a dragon that he couldn't do in Ponyville.

Garble offers Spike to go on a dragon raid, where they will steal from a nest of phoenix eggs. Garble instructs Spike that he, as a rookie dragon, must lure the parents away from the nest. After Spike lures them away, Garble looks inside the nest to find the eggs have already hatched.

He tries to take the hatchlings, but fails as they manage to get away. He and two other dragons from his gang chase the hatchlings, and he unintentionally causes an egg to fall from the nest. The phoenix parents find out about Garble's raid, and they get their hatchlings back. As the phoenixes are flying away, Garble tries to stop them, but the male phoenix counter-attacks and knocks him and his friends into a tree. They fly back to the nest to find Spike holding the egg Garble knocked down earlier. He is impressed by this, and tells Spike to smash it. Spike refuses, and Garble is angry that he said "no" to him.

Garble and the two other dragons close in on Spike, but Twilight, Rainbow Dash, and Rarity come and threaten the dragons if they try to hurt Spike. Having found out the friendship, Garble and his friends laugh at this, completely unafraid at the ponies' threat. He asks Spike if these are really his friends, and he proudly answers yes, and even insults him and tells him to back off. Garble is annoyed as Spike runs away from him, so the dragons chase the four friends, but they get away and Garble and his gang crash into another tree. Shortly afterwards, Spike would accept the three ponies as his true family.

Garble returns as the main antagonist of the Season 6 episode "Gauntlet of Fire", still harboring a low opinion of both Spike and ponies in general. He is summoned to the Dragon Lands by the call of the Dragon Lord to take part in the Gauntlet of Fire, the winner of which will be crowned the new Dragon Lord. Garble wishes to be the Dragon Lord so he can get revenge on the ponies who crossed him.

Throughout the Gauntlet, Garble mocks Spike for his small stature and pony-like characteristics . However, he under-performs at multiple times during the race. In the final dash for the bloodstone scepter that decides the winner, Garble faces both Spike and his partner Princess Ember. As a result of their teamwork, Garble loses. As punishment for his actions, Spike — the winner and temporary new Dragon Lord — commands him to go home and hug every dragon he passes along the way without disclosure, much to Garble's humiliation.

In the Season 7 premiere "Celestial Advice", Garble appears in a simulation produced by Twilight of what could happen if she sent Starlight Glimmer to learn about friendship in the Dragon Lands. In the simulation, Garble meets Starlight and has a hard time trying to pronounce her name before then grabbing her and diving head first into lava, fueling Twilight's paranoia.

In "Shadow Play Part 1", Garble appears as the minor antagonist. When Rainbow Dash and Spike enter the Dragon Lands, looking for Flash Magnus' shield. Garble soon reveals that he possess the shield and refuses to give it up unless Spike beats him in a lava surfing race. Spike then easily beats Garble by accidentally falling and bouncing off of several rocks, prompting Garble to attack him in rage. Rainbow Dash saves Spike from Garble's attack and prompts Garble into another race, this time up the mountain, the winner keeping the shield, with Garble being additionally permitted to pummel Spike. Rainbow Dash then tells Garble that, with the shield weighing him down, the would be no way he could win, resulting in him taking it off his back and starting the race, allowing Rainbow Dash and Spike to steal the shield and fly away.

Garble appears as a reformed supporting protagonist in "Sweet and Smokey". It was revealed that he is Smolder's brother and has redeemed himself in this episode. 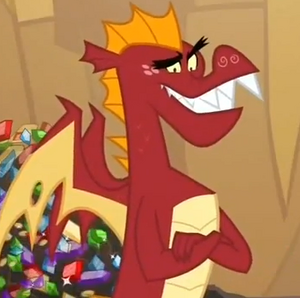 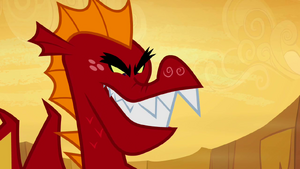 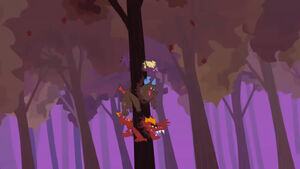 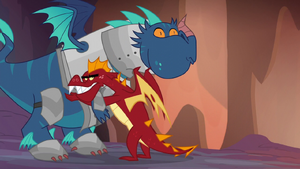 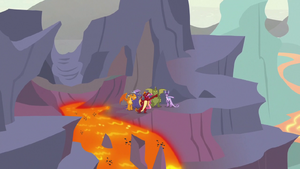 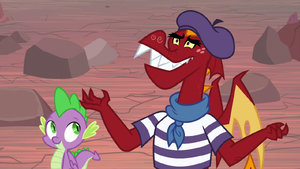 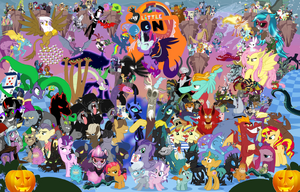 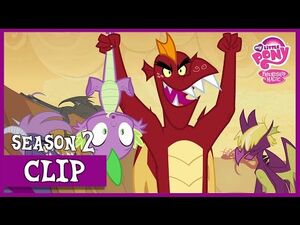 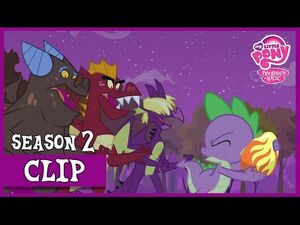 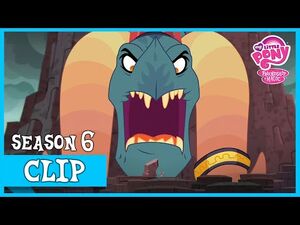 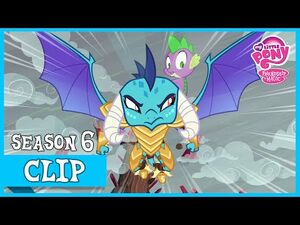 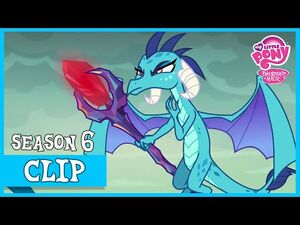 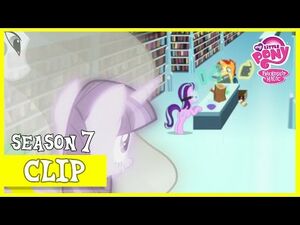 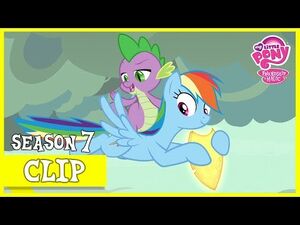 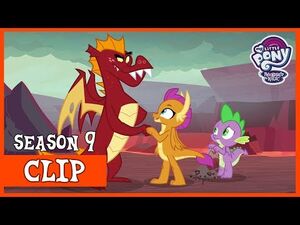 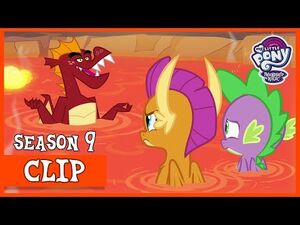 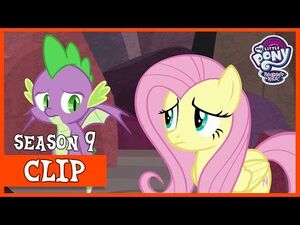 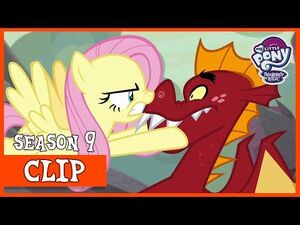 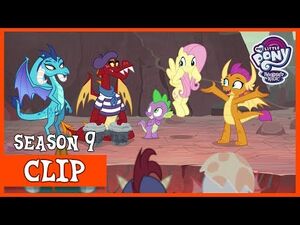