Feeding on humans and other lower creatures.

Selecting and replacing his High Priests.

Continue feeding on people and being active (dependent upon player's choice).

Gardath is the main antagonist of Volume 2 "Tomb of the Underground God" from the 1999 survival horror game Nocturne. He resembles a giant insectoid creature with divine powers who resides in the ancient tomb beneath the small town Redeye located in West Texas and is the source of zombie infestation in aforementioned town.

He was voiced by John William Galt along with several other characters from the game.

Gardath is a massive insectoid monster with multiple spider-like legs, eyes and baggy appendages all over his greenish body. His abdomen is divided in three sections and is swollen, possibly containing soon-to-be-born larvae that will later develop into Drones - considerably less massive versions of their master, resembling bipedal, multi-armed creatures of different colors and sizes, defining their strength and durability. A long tail protrudes from Gardath's back, and, judging by the opening on its end, the offspring are born from there. Gardath's body is affixed to the ceiling in the center of the tomb right above the seal with the creatures figure. None of the Stranger's weapons has any effect on Gardath's well-being and the only way to stop him is to complete the seal beneath it with the binding stone.

In the winter of 1931, a strange man came to Redeye, asking about the nearby mines. He then vanished as suddenly and mysteriously as he arrived. That man was the church priest named Martin who has been researching many forbidden texts, such as Necronomicon, for a long time and to whom was revealed the truth about an ancient God sleeping in the tomb under West Texas. After making his way into the mines and further, Martin brought that abomination back to life using manipulations described in books and manuscripts. Martin offered Gardath the townsfolk of Redeye above them, which led to the deceased raising from their graves and spreading the affliction, that turned everybody who came into contact with it into mindless, bloodthirsty monsters, including the animals. In return, Gardath transformed Martin into the humanoid creature with physiology similar to that of an insect, thus making Martin his High Priest, granting him otherwordly powers.

Later that year, a secret organisation named Spookhouse received reports of zombie-like undead wrecking havoc in West Texas, Redeye and sent their best agent Stranger along with organisation's psychic Mottra Hiram to investigate and relieve Redeye of its demise. However, they are both attacked on their way to town by the tribe of vengeful werewolves, who sabotaged their train and murdered Hiram. After dealing with all the werewolves and their leader, Alpha, Stranger jumps off the crashing train and sinks into oblivion.

He is then brought to his senses by the local reverend Jim Maynard. On their way to the church, he explains to Stranger that Scat Dazzle, another Spookhouse agent who was sent earlier, died accidentally while defending the safe house from zombies. After arriving to the church and acquiring cigar from Scat's body, Stranger ventures to saloon in the middle of Redeye to grab a bottle of rum. These items are required to summon the voodoo god of death, Baron Samedi, who agrees to revive Scat Dazzle. Upon coming back to life, Scat informed Stranger of survivors that are scattered throughout the town. Stranger eradicates every last zombie from town and brings all the survivors to the church. One of them, little boy named Tommy Smith, mentions that he had witnessed monsters crawling out of the old mines. Reverend Jim supports boy's claim and Stranger decides to investigate the mines. With the help of Tommy, who opened the entrance into the mines from the other side, Stranger proceeds underground.

After clearing the mines from zombies and demolishing the stone blockage, Stranger finds a long cave, littered with huge, acid-spitting grubs, which leads to the underground tomb of an unknown race. There he encounters hordes of insectoid creatures, Drones, and faces Gardath himself, hanging from the ceiling, seemingly unresponsive. In the alcove below Gardath stands the High Priest surrounded by statues of Drones, either resting or pretending to be a statue. The tomb contains of many dimly lit corridors with peculiar symbols engraved on the walls and statues of Drones everywhere. Almost each of these corridors leads Stranger to elaborate traps, guarding the disc-shaped stones, which are used to get to the most important of them, the binding stone with Gardoth's image on it. After getting the binding stone, Stranger is ambushed by the group of Drones, but instead of killing him, they bring him to Gardath. The High Priest, who Stranger assumed to be the statue, starts to moves and comes closer to Gardath. We witness a dialogue between them, during which Gardath communicates to the priest using an unknown language. However, from the priest's speech it becomes clear that Gardath has been observing the Stranger all this time and concluded that he is worthy of becoming the new High Priest. The Old High Priest is torn to shreds by the group of Drones, while insulting and cursing towards Gardath for betraying him. Gardath then offers Stranger to become his High Priest in perfect English. After Stranger declines the offer, Baron Samedi suddenly appears, controlling Scat Dazzle's body, and strikes several Drones to death with his magic. Baron explains to Stranger that this tomb was designed as a prison for Gardath and in order to put him to sleep once again, Stranger just needs to place the binding stone in the center of the seal beneath Gardath. If Stranger is not fast enough to complete the seal, Gardath will strike him with a lightning bolt, killing him instantly.

After completing the seal and escaping the quaking tomb, Stranger expresses concern about the creature being still alive and Scat assures him that the Spookhouse will block the entrance into the mines. 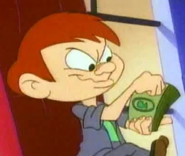 The seal and remnants of the High Priest.

Gardath striking the Stranger to death.

Gardath being supressed by the complete seal.

Add a photo to this gallery
Retrieved from "https://villains.fandom.com/wiki/Gardath?oldid=3803306"
Community content is available under CC-BY-SA unless otherwise noted.