Becoming a respected warrior and find the North Grove.

Become a respected warrior and find the North Grove (succeeded).

Gared Tuttle is one of the five playable characters in the 2014 game, Game Of Thrones. He is seen as the main protagonist, as he is the first character to play. Depending on your choices in Episode One: Iron From Ice, Gared Tuttle can be an anti hero that shows no mercy during battle, and lets others die to further his own position within house Forrester. In Episode Two: The Lost lords, after being sent to the wall to become a brother of the Night's Watch, Gared can also be opprobrious, vituperative, and disrespectful towards his superiors and cares little for the lives of the other members of the night's watch, as well as being so sadistic and blinded by revenge that he ends up breaking his vows and getting himself into serious trouble.

The Codex is the description of the background of the Gared Tuttle and the other characters within the game. The Codex gets updated as the player character story arc continues.

Gared was raised on stories of heroism about the likes of Arthur Dayne and Symeon Star-Eyes. Though the son of a pig farmer, he has always aspired to one day become a warrior himself. With the help of his uncle Duncan, who had risen from lowborn origins to become Castellan of Ironrath, Gared found work in Lord Forrester’s stables, rising through the ranks to eventually be named his squire. Gared has served Lord Forrester throughout the long months in King Robb’s army, and is ready to be a warrior in his own right.

Gared Tuttle is a loyal squire under house Forrester he fierce warrior with dreams of being one of the best fighters in the north and have stories told about his acts of heroism. but to further his own position in house Forrester he is capable of doing underhanded deeds such as letting Bowen die during the Red Wedding so Gared can be giving extra time to safe Gregor Forrester who just promoted him to soldier in Robb's Army. But unfortunately Gared Tuttle is unable to Save Gregor's life who is killing during the red wedding.

Another act of Gared Tuttle choosing his own ambition over the safety of others is instead of telling Gregor's final words to Duncan Tuttle, or comforting the children and the wife about the death of there father and husband, the first thing Gared wanted to talk about was the promotion giving to him by Gregor.

Gared Tuttle is a ruthless during battle, after he sees soldiers of house Whitehill and House bolton attacking his farm and hurting is father Gared instantly retaliates by killing one bolton soldier by stabbing him in the neck with a pitchfork, the Whitehill soldier begins to beg for his life stating he has a family Gared ignores his begging and stabs him with his sword.

After Bowen told him to wash the bloody sword he can insult him, when the guard speak to the other guards about the kingslayer he tell Bowen to shut up and let the guard finish his story, when Lord Forrester is now out of his tent he refuse to serve the wine by saying to Bowen he's not his boss, but Bowen remind him he's a squire and supposed to do his job. When Lord Forrester give him a cup, he enjoy the festivities, but did said "Winter is coming", so when Lord Forrester told him to keep an eye on his son Rodrik Gared told him he done nothing wrong to deserve it. Lord Forrester want to gave him a reward, but Gared told him he seek nothing for him just serve the noble house. When Bowen told him to help him get some wine he refuse and told him to get it himself, but he have no choice to finally help Bowen who is squire longer than him, on their way to get the wine he told Bowen to shut up after he said bad things about Lord Forrester and about the pigs make to do bacon. When the camp is under ataack he decide to let Bowen behind and go warn Lord Forrester and left Bowen to died, later after the camp attack and he go to his father farm, and was attack by Britt he can decide to kill the guard without mercy instead of let him go, when he go to his uncle house, after he get finally cure from his injuries he can meet Ethan and make him agreed to meet Whitehill in hallway from his uncle house. 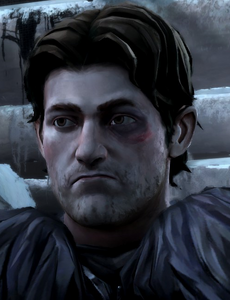 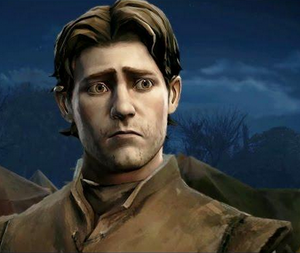 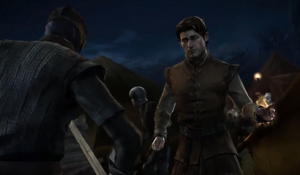 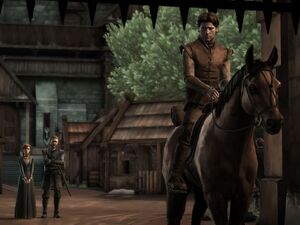 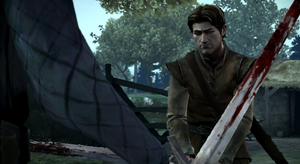 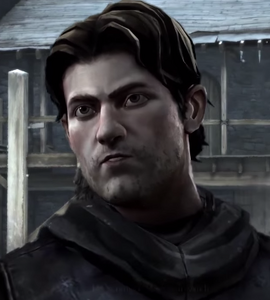 Retrieved from "https://villains.fandom.com/wiki/Gared_Tuttle?oldid=3368009"
Community content is available under CC-BY-SA unless otherwise noted.