Villains Wiki
Register
Don't have an account?
Sign In
Advertisement
in: Anime Villains, Fist of the North Star Villains, Blackmailers,
and 13 more

He was voiced by Keiichi Noda.

Garekki leads KING's Golden Wolf Army for Shin. Arriving at Jina village, he warns the village send out Kenshiro for judgement but they try to remind him he's not in the village. Just then, Garekki's watch beeps and he begins his lunch time, executing one of his henchmen for questioning his motives. While eating lunch, Garreki doesn't even bother reacing to news about

Three hours later, Garekki launches his henchmen out of cannons onto the village with the Nanto Ningen Houdan technique, which involves being shot out of a cannon at high speeds. Kenshiro meets Garekki on the battlefield just after defeating Mahari's Blackbird regiment.

Garekki then uses his human cannonball technique, first by firing his soldiers which are killed before the hit the ground by the Hokuto Shinken master, then Garekki launches himself out of a cannon. However, Kenshiro catches and paralyzes Garekki with the Hokuto Kokuo Zan.

Beaten, the Golden Wolf commander attempts to have the villagers executed, but is thwarted by Bat and Jennifer. However, Garekki left some kids unattended in a hot air balloon. Seeing the children in desperate need, Kenshiro loads Garekki into a cannon, then Bat launches him at the balloon, saving the kids and also killing Garekki who explosively dies on impact with the ground.

Garekki is a skilled swordsman and mainly utilizes the Nanto Ningen Houdan, which involves his henchmen and himself armed his swords while fired from cannons. 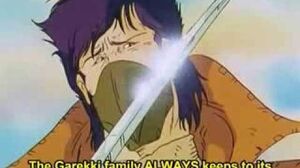 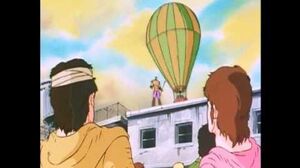