Killing humans and eating them.

Mislead and kill survivors for supplies and food.

Locate survivors and kill and eat them.
Hunt down Rick's group and cannibalize them.

He was portrayed by Andrew J. West.

Gareth originally wanted to start a safe haven with his family and create a new society, showing that he once had well-set intentions. However, his original safe haven was taken and terrorized by an unknown group of bandits who saw the signs for Terminus. They locked up the Terminus residents for months and raped the women many times. Gareth then got an idea of Social Darwinism in his mind, deciding its kill or be killed, or, as he puts it, "You're either the butcher or the cattle."

It isn't shown how they take back their territory, but its stated by Mary, Gareth's mother, that they fought back and had eventually regained their sanctuary, implying that they killed all of the people who terrorized them. However, with everyone following Gareth's lead, they had eventually become cold and ruthless, killing any survivors that follow their 'Sanctuary For All' signs, and then taking their supplies. They eventually resort to using their dead bodies as food. Any newcomers that came to Terminus and agreed to Gareth and his people's ways of survival were welcomed into the community, but those who rejected their ways of survival or posed as a threat were then captured, killed and eaten by Gareth and his people.

Gareth appears in the large room that Carl, Rick, Daryl, and Michonne go inside of after sneaking into Terminus. Gareth questions them, asking if they are there to rob them, which they respond to and then if they are there seeking sanctuary. He orders them to drop their weapons and Alex frisks them. Gareth warns the four of them not to try anything stupid and has Alex show them around Terminus. Rick, after noticing the Terminus members possessing several items belonging to members of the prison group such as Daryl's poncho, Hershel's pocket watch, the riot gear, and the orange hitchhiker's bag, Rick takes Alex and holds a gun at his head demanding to know where their people are and why their group has the pocket watch, riot gear, and poncho. Gareth lies, claiming to have taken the riot gear off of a dead cop and that they found the poncho on a clothesline. After a Terminus Resident accidentally shoots and kills Alex while aiming at Rick, a shootout ensues and Rick, Carl, Daryl and Michonne flee, only to be stopped when Terminus residents line up along the outside of the fence at the back entrance with guns pointed at them. Gareth orders the four of them to lower their weapons. After this, Gareth calls them by specific code-names to walk towards the boxcar: Rick (Ringleader), Daryl (Archer), Michonne (Samurai) and Carl (Kid) in that order.

In the Season 5 premiere, Gareth appears as Rick, Daryl, Bob, and Glenn are gagged and leaned over a trough in a building adjacent to the train car "A". Gareth enters, interrupting one of the Terminus Guards just as he is about to knock out Glenn, asking for the "shell count" from them. After hearing muffled sounds from Bob, he reluctantly pulls down Bob's gag, after which Bob pleads that there is another way to resolve everything and that they have plans to fix everything. Gareth laughs, telling Bob "the world can't go back", shortly before putting Bob's gag back in. He then taunts Rick by threatening to kill Bob with a knife as to what was in the bag he had hidden outside Terminus. Rick responds with several guns and a red-handled machete and claimed that was what he was going to use to kill him.

Gunfire is heard after, interrupting Gareth and the Guards again. After, Carol, not seen at first, blows a hole in the gasoline tank outside and lights it using a firecracker, to which Gareth runs outside. Gareth is later seen as the group escapes, and is shot in the arm by Rick as he lays down cover fire for the other escaping members of his group.

Gareth is seen again (although it is likely he was watching the group as they camped out in the woods prior) after his group knocks Bob unconscious. As Bob awakens, Gareth says that Bob is not dead yet and says the Terminus group never intended to hurt anyone, but now his hand has been forced after the shootout and the loss of Terminus. As Gareth eats a chunk of meat, Bob looks down to see that his left leg is now missing, confirming that Gareth and the Terminus remnants are cannibals. Gareth then delivers the final line, "If it makes you feel any better, you taste much better than we thought you would..."

Whilst taunting Bob about coming after the group and his girlfriend, Sasha, Bob begins laughing maniacally, revealing that he has been bitten and they were eating, as he had described it, "Tainted Meat". Outraged, Gareth kicks Bob in the face, knocking him unconscious, as his other group members had reacted fearfully to his claim. Gareth disregards it, saying that they had already cooked his leg.

A while later, Gareth and his group drop Bob off in front of the church (where the group was hiding) as a warning, along with a group of walkers, and a red 'A' painted on the church wall, similar to the way they directed the traps at Terminus. The group is told by Bob and directed by Father Gabriel as to where to find the hunters. Rick, Sasha, Abraham, and Michonne then set out to exact revenge on the hunters. However, Gareth had planned for them to do this, as they were hiding outside the church as they left.

Gareth and his group entered the church and called out all the members who had remained, as he was right about each one. As two of his group are suddenly shot, Gareth turns to see Rick's group hadn't gone to their camp after all. After trying to tell Rick and his group to put their guns down, two of Gareth's fingers are shot off by Rick as he approaches him. Rick forces Gareth and the rest of his group to drop their weapons and kneel, which Gareth obliges to. Gareth begs for his life, and questions why he didn't just shoot him and the rest, and Rick responds with, 'we didn't want to waste the bullets'.

Gareth tells Rick that Terminus used to be a safe haven for wandering souls, but that they were forced to take up cannibalism after they were attacked and left "hungry". He begs Rick to let them go, promising they will never cross paths again. However, Rick points out that Gareth and people could still kill other people if they were allowed to leave the church alive. Rick then pulls out the red-handled machete and slaughters him, fulfilling the promise he made when he was about to be butchered at Terminus. Gareth and his group were buried in proper graves outside the church in the morning. 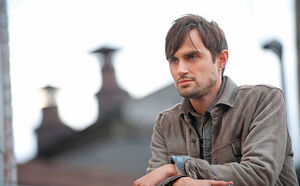 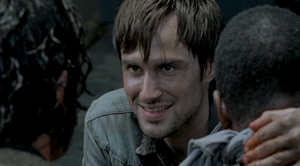 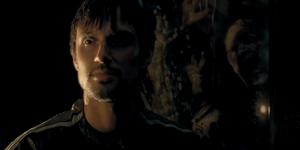 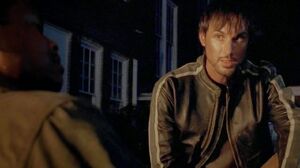 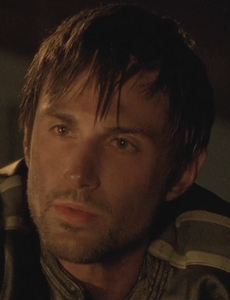 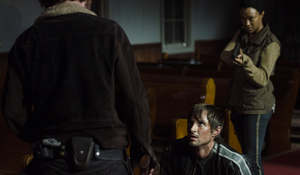