Keep Leon from night fishing by stealing his jar of fireflies (failed).

The Gargaloons are the main antagonists of Laika's 2005 short film, Moongirl. They are a pair of ghosts who hate moonlight want to prevent Leon's night fishing by stealing his jar of fireflies.

They were voiced by director, Henry Selick.

The Gargaloons are first seen when Moongirl's cat tries to eat Leon's pet squirrel. They sneak into Moongirl's home and steal Leon's jar of fireflies.

Moongirl notices their presence and the Gargaloons chase after them until the cat gets stuck in glue. Leon uses his squirrel to steal back the jar while Moongirl tries to free her cat from the glue. As the two ghosts chase after the squirrel, Moongirl finally frees the cat and he swipes his paw at the Gargaloons, sending them flying into the sky.

It is unknown what happened to them after their defeat, but they presumably died in space afterwards. 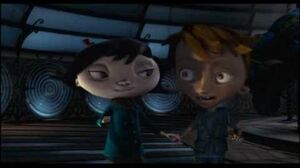 Moongirl
Add a photo to this gallery

Retrieved from "https://villains.fandom.com/wiki/Gargaloons?oldid=3773399"
Community content is available under CC-BY-SA unless otherwise noted.