Plotting against the Smurfs.

Use the smurf essence to become the most powerful wizard and control the entire world (both failed).

Gargamel is the main antagonist of Sony Pictures Animation's 12th feature film Smurfs: The Lost Village. He is an evil wizard and the arch-nemesis of the Smurfs. His goal is to use the Smurf essence to become the most powerful wizard and control the world.

He was voiced by Rainn Wilson, who also played Gallaxhar in DreamWorks' Monsters vs. Aliens Dwight Kurt Schrute in The Office, Jack Morris in The Meg and Lex Luthor in the DC Animated Movie Universe.

Gargamel seeks after the Smurfs in order to extract their Smurf essence to become the most powerful sorcerer. While here he is still the creator of Smurfette, he doesn't regard her as a true Smurf and thus finds her worth only as the one who will help him find and capture Smurfs. Also besides Azrael, he has a pet vulture named Monty.

When Smurfette discovers a Smurf hat dropped by a Smurf-like figure from the other side of the wall, Gargamel takes a strand from it and uses his magical cauldron to ascertain the hat's origin, to discover that it comes from a group of Smurfs located somewhere in the Forbidden Forest. Eager to find those Smurfs, Gargamel ventures into the Forbidden Forest with Azrael and Monty, hoping to reach and find those other Smurfs before Smurfette, Brainy, Clumsy, and Hefty do. Although delayed by ending up in the part of the forest where he was attacked by carnivorous "bottom-feeder" fish, Gargamel soon discovers the village of Smurfettes and uses his Freeze Balls to capture them all, including Smurfette's friends from her own village.

With the captured Smurfs, Gargamel extracts enough essence to enhance his magical powers and to give himself more head hair in the process. Smurfette arrives to pledge her allegiance to her true master so that he could capture the remaining Smurfs from Smurfette's village. Gargamel tries to use his power to restore Smurfette back to her previous evil self, but Smurfette ends up absorbing Gargamel's power instead, forcing him to extract more Smurf essence to balance out the effect. Eventually, there is an explosion which catapults Gargamel far away from his castle, saving the Smurfs and Smurfettes, though at the cost of Smurfette reverting back to a pile of lifeless blue clay. Gargamel, Azrael, and Monty are landed in the lake full of piranhas which chases after them.

He was seen during the credits looking at the people who made the movie and telling the credits to make the music stop, after blaming Azrael and Monty for their failure.

Gargamel has no magical powers in himself. However, his determination, deceit and the artifacts he uses to produce magical effects make him a dangerous enemy.

When he absorbs the Smurfs' energy, he becomes empowered with powerful magical powers like body manipulation, pyrokinesis, and energy absorption. 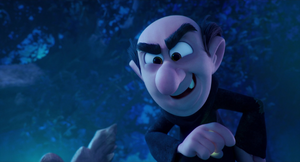 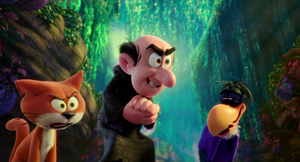 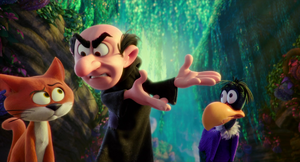 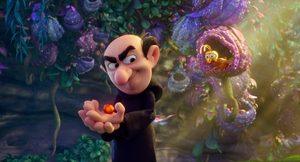 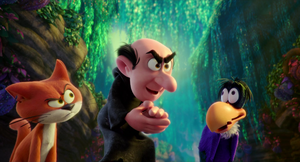 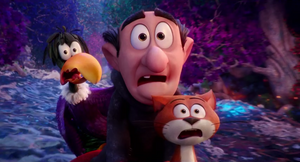 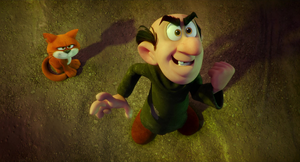 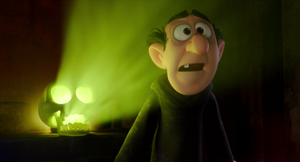 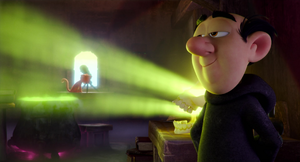 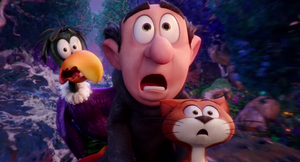