Guardian of the 4th Floor

Obey any command given from its master.

Gargantua is a supporting protagonist from the light novel series Overlord. It is a massive golem-like creature that serves as the Floor Guardian of the 4th Floor of Nazarick.

Gargantua is a behemoth of a monster with a rock-like appearance. It appears to have red glowing eyes and streaks of red lights that drag down on its face. The same red glow carries over to its chest.

Gargantua appears to be a completely mindless creature, as it is unable to communicate and act on its own. It does nothing but follows Ainz Ooal Gown's orders, obediently.

While most NPCs were created by the Supreme Beings, Gargantua is a unique exception, as it was given to Ainz Ooal Gown as a gift by the Game Administration. Some time later, it was eventually given the role as the Floor Guardian of the 4th Floor.

Gargantua briefly appeared when Ainz Ooal Gown visited the Lizardmen village for the first time. It tossed over a massive boulder into the water for Ainz and the other Floor Guardians to present themselves to the Lizardmen. Gargantua soon disappeared afterwards.

Gargantua is implied to be the strongest of all the Floor Guardians, as it was stated that his stats surpass all of the others, including Shalltear's. While Gargantua has yet to demonstrate its full capability, it has shown off the following: 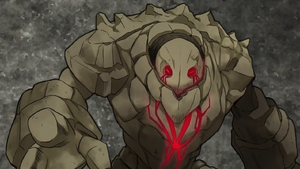 Retrieved from "https://villains.fandom.com/wiki/Gargantua?oldid=3773401"
Community content is available under CC-BY-SA unless otherwise noted.