Villains Wiki
Register
Don't have an account?
Sign In
Advertisement
in: Monsters, Undead, The Amazing World of Gumball Villains,
and 35 more

End the world (both failed).

Cataclysmic Monster
Gargaroth is a minor antagonist in The Amazing World of Gumball that first appeared in a cameo in "The Compilation" and served as the main antagonist in the Halloween episode "The Scam". He can only communicate by making grunts and farts.

Gargaroth is a black blob monster with multiple red eyes with green irises, hands, ears, and mouths all over his body. His main face has one eye and a big mouth that can produce green slime. He has another face that is white with red dotted eyes and a crooked mouth.

On Halloween night at Elmore Junior High, Gumball tells a spooky story to the whole class about the monster called Gargaroth, terrifying the students and Miss Simian as they fled is terror.

While Gumball, Darwin, and Carrie scammed everyone at school of their candy as ghost hunters, they soon discover that Gumball's monster story came true and Gargaroth took over the school. The three heroes came to the rescue to stop the monster. They corner Gargaroth, who had risen from the underworld. Gumball tries to suck him up with his vacuum, but it didn't work because Gargaroth is an actual monster, not a spirit. Carrie states that the only way to defeat him was to make a sacrifice, which she sacrificed all the candy she and her friends scammed to feed Gargaroth (except a lollipop that Gumball wanted to keep for himself). Carrie then asks Gargaroth to marry her, much to Darwin's horror. Darwin refused to let Carrie go, so Gumball tossed the last piece of candy into the monster's mouth, killing him by making him explode, and saved the school. 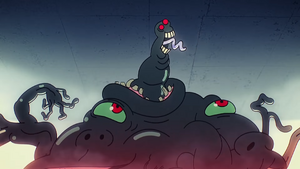 Gargaroth's cameo in "The Compilation". 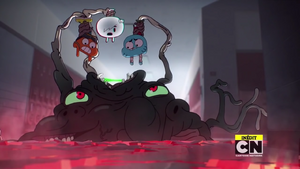 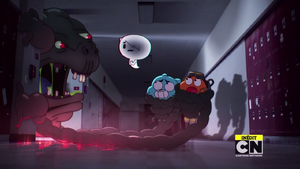