A very long time ago, a mysterious man rose to power literally from out of nowhere. His name was Gargos, and at only 17 years old, he was already making quite a name for himself. With only a few weapons and limited soldiers at his expense, he had already conquered a great deal of the countryside, won a good number of battles, and terrorized quite a few villages. As Gargos's victories increased, he found a large number of soldiers who were ready and willing to join him in his quest for destruction. With Gargos's arsenal and manpower supply growing every day, it seemed like Gargos would be well on his way to total power before he even reached twenty years old.

Somehow, this was not enough for him. No matter what, he could never escape the fact that he was an ordinary mortal, and some random soldier in any battle could get lucky and slay him. To try to stabilize his greatness, he did a number of things. For some of his more fanatical soldiers, he guided and helped them to create a religion that worshiped him. The shrines that were built in his honor were named Tiger Shrines, to mirror his spirit (Gargos believed himself to be not unlike a tiger). (Side note - throughout history, almost all of Gargos's shrines were destroyed by rival armies or angered villagers - save one small one in Tibet). He began to consolidate the territories he had conquered, to form his own kingdom. Still bothered by his mortal limitations, shortly after establishing the Tiger Shrines, he disappeared for 2 years. No one knows where he went, although the popular rumor that circulated around his soldiers was that he kidnapped a martial arts master, and went up into the mountains to train.

After Gargos resurfaced, he immediately set sail for Greece, with one goal in mind - Mt. Olympus. Gargos sought out the Greek Gods to fulfill his master plan. He wanted to eliminate the one thing that made him weak - his mortality. He challenged the gods to open combat. They were startled by his boldness, but admired his bravery. They accepted, not really realizing how skilled he was. Gargos managed to defeat the Gods fairly, something that was unheard of for a human to do. As a condition of his victory, Gargos was granted any one wish he desired. He wished to be immortal, and it was thus granted. However, the Gods were bitter about losing, and decided to mutate Gargos into an energy-based lifeform to make him immortal. Gargos could assume a physical shape, but he could no longer take a human one as it would be too small and weak to contain his power. (Gargos choose to assume the shape of a gargoyle - it seemed fitting).

At the cost of his humanity, Gargos became immortal. His power also came with limits - if he was defeated in battle, although he could never be killed, his energy could be sealed up in the Seal of Gargos. If this happened, the seal would break in two, and Gargos would be trapped in the two halves until they were reunited. Having gone slightly insane from his transformation, Gargos disappeared for 3 months. But when he returned, he came back stronger than ever. He began a rampage across the countryside, killing and destroying. Realizing that he had transcended humanity, Gargos decided that he should become the ruler of the Earth. He began the ritual of proving himself worthy by establishing his superiority, by force. However, a group of monks, realizing the stipulation of his immortality, banded together, used their powers, and defeated Gargos, sealing him away. Gargos was locked away for over 1,000 years. Somehow, during this time, his legend spread. Unfortunately, it spread somewhat incorrectly.

The legend told about the powerful and immortal warrior Gargos, but it said that whoever freed him would have complete control over him. This was not true, as many warlords found out, as they freed him, and tried to make him their slave. Four or five times, Gargos would be sealed away, only to be freed again. During his last and current period of freedom, Gargos found that his claim to the earth was being challenged by a new warrior named Eyedol. Like Gargos, he had been mutated, and it was rumored that he also challenged the gods and won. Eyedol seemed to also have some prior grudge against Gargos. It wasn't long before the two behemoths clashed in battle, but before a conclusion could be reached, Eyedol disappeared.

Only moments later, a strange building appeared. Gargos went to it, hoping to find an answer to what happened. Before he knew it, he had been captured by a strange new power he was unfamiliar with. After a few days, Gargos learned that he was in the Ultratech Corporation, a building from about 2,000 years in the future. They had things and powers quite unfamiliar to him. The leader of this "corporation", Robert Sheridan, promised to share some of his power with Gargos so long as he helped him with a fighting tournament. Finding himself facing a greater power, Gargos' agreed.

Gargos returns with a new design in the reboot of Killer Instinct, officially appearing in the season 3 and he is described as the master of Omen.

The demonic Lord Gargos lurking in the shadows. 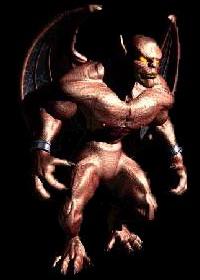 Gargos as seen in the reboot of the series. 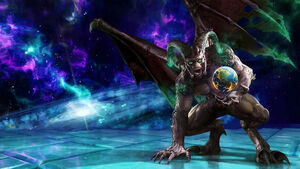 Add a photo to this gallery
Retrieved from "https://villains.fandom.com/wiki/Gargos?oldid=3536649"
Community content is available under CC-BY-SA unless otherwise noted.