God (according to himself)

Nadia: The Secret of Blue Water

Take possession of the Blue Water (succeeded, until he permanently loses possession of it)
Dominate the earth and humans, whom he considers inferior (failed).

Nemesis La Algol, better known as Gargoyle, is the main antagonist of the Japanese animated series Nadia: The Secret of Blue Water. He was the ruthless and diabolical leader of the organization known as Neo-Atlantis, born from the ashes of the old, dead kingdom of Atlantis which aimed to conquer the world and subjugate the human race.

He was voiced by Motomu Kiyokawa in the Japanese version, Steve Bulen in the English Streamline dubbed version, and David Jones in the ADV films dubbed version.

At one time, Nemesis held the post of Prime Minister of Tartessos during the reign of King Eleusis la Arwall. In 1876, Nemesis began the coup to overthrow the government resulting in the death of the queen. After revoking the kingdom of Tartessos, Nemesis began calling himself "Gargoyle" and named himself absolute head of the Empire of Neo Atlantis. Determined to experience the power of the Tower of Babel that was sealed for centuries for use as a weapon of mass destruction, the former minister convinces the king's son, Emperor Neo, to deliver the Blue Water. Said object, in fact, would have acted as a catalyst for the Tower, igniting it and unleashing devastation upon the world. However, the plan was foiled in time by King Eleusis, though it still caused the destruction of the entire city and the deaths of all its inhabitants. After the cataclysm, Gargoyle found Emperor Neo's remains. Aware of the inherent powers of the heir of the Blue Water, Gargoyle decided to give Neo a robotic body in order to keep him alive and control him at will. He firmly believed himself to carry the blood of Atlantis, until the end, in front of the true power of Blue Water, he learned that he was human just like everyone else. Sadly accepting his fate, his human body succumbed to the power of the stone, turning into nothing but salt.

Gargoyle is tall, imposing and slender at the same time, and appears to pay much attention to detail and appearance. His usual attire consists of black, polished shoes, a double button in red trousers of the same color, a black shirt on which sits a yellow tie, and white gloves with the symbol of Neo Atlantis on the backs. He wears a white mask with a stylized sad expression. The eye in the middle is the symbol of Neo Atlantis as well, whose cross makes a red line that connects to the tip of the nose. There are two signs similar to tears descending from the eye holes up to the jaw. He also wears a black cotton hood to completely cover his head and hair, which, during the final battle, is switched with a steel helmet. Under the mask conceals a middle-aged man with a thin face, prominent nose, brown skin, green eyes, and graying hair long just to the shoulders.

Temperamentally, Gargoyle is a very ambitious man who boasts of his immense power. He believes himself to be an immortal with the want to control human beings. He has great hatred towards them and wishes to exterminate them because he views them as lower. However, these features are nothing in comparison to his insatiable thirst for blood and power. Although calm, cool and determined, he is prone to explode into outbursts when his plans go up in smoke and he is not afraid to kill his followers for their mistakes. He does not hesitate to sacrifice everything to accomplish his evil plans and will kill anyone who dares get in his way. Accustomed to commanding everyone and everything, in the last moments of his life, disappointed by the revelation that he was one of the creatures who he hated. Realizing that his plans were based on nothing but a delusion, his will proved to be weak and insignificant. 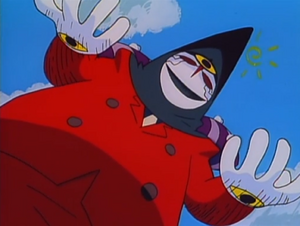 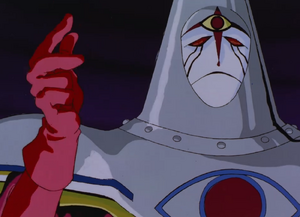 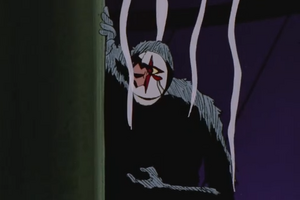 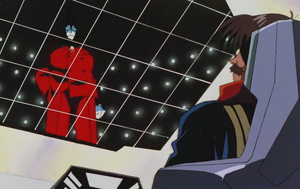 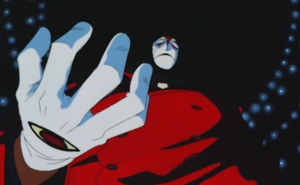 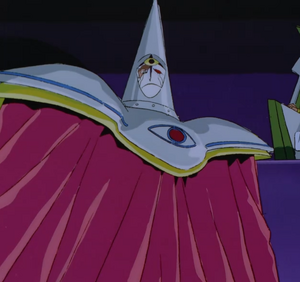 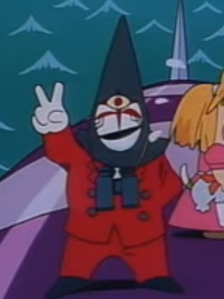 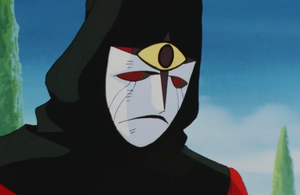 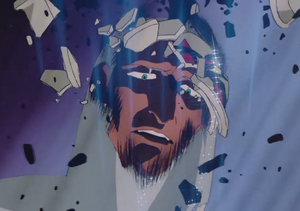 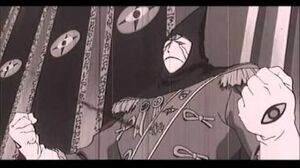 Neo Atlantis Theme
Add a photo to this gallery

Retrieved from "https://villains.fandom.com/wiki/Gargoyle_(Nadia:_The_Secret_of_Blue_Water)?oldid=3714031"
Community content is available under CC-BY-SA unless otherwise noted.