The Gargoyle is a recurring boss and antagonist from the Thunder Force series, always appearing as the very first boss in the games. It takes on a different form in each game, though all forms share a lizard-like appearance and similar attacks, as well as the weak point in the stomach.

First appearing in Thunder Force III, the original Gargoyle was a large bipedal robot which acted as the boss of the Hydra Planet. It's attacks consisted of breathing fire and shooting fireballs, all while walking back and forth. It appears again in Thunder Force IV, this time in a new form called Gargoyle Diver, which changes the lower half of the body for a prehensile tail, which it uses to defend it's weak point and to shoot energy waves at the player.

It appears again in Thunder Force VI, the last game in the series. It initially shows up in a form similar to Gargoyle Diver, but after taking enough damage it fuses with a larger body to form Gargoyle Perfect. It's attacks are similar to the original Gargoyle, but it can also dash around to crash into the player. 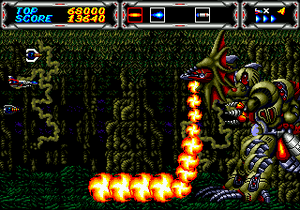 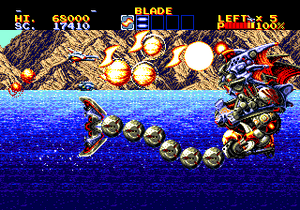 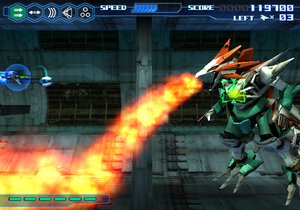 Gargoyle Perfect
Add a photo to this gallery
Retrieved from "https://villains.fandom.com/wiki/Gargoyle_(Thunder_Force)?oldid=4032815"
Community content is available under CC-BY-SA unless otherwise noted.