Can open the Dead Zone
Presumably:
Energy blasts
Superhuman strength
Transforming into a larger form of his normal
Strength

Become the ruler of Earth by any means.

Have his son Garlic Jr. avenge him should he fail (all failed).

Posthumous Tyrant
Garlic is the overarching posthumous antagonist of the 1989 film Dragon Ball Z: Dead Zone and the Garlic Jr. Saga of the anime adaptation of Dragon Ball Z. He never makes an appearance other than some minor flashbacks.

Most of Garlic's past is unknown, except that he at some unknown point had a son before he competed with a nameless Namekian who later became known as Kami for the position of being the Guardian / God of Earth. However, the previous Guardian of Earth saw evil in Garlic's heart while Kami had none so he choose Kami as his successor. Outraged at being passed up, Garlic summoned a horde of his followers and planned to take the position by force. In the end, the previous Guardian overwhelmed Garlic and imprisoned him and his followers inside the Dead Zone. Before he was banished to the seemingly inescapable void, Garlic had warned them his son would avenge his fate and one day take the position of Guardian/God of Earth for himself.

Afterwards, he spent the rest of his days imprisoned in the Dead Zone and died at an unknown date.

Of what we know he seemed to be a power-hungry and egotistical creature who wished to at minimum rule Earth as its God. Garlic's personality and ultimate goal is not elaborated on much though it is a possibility he wished to rule Earth and later expand his reach further across to other worlds but this is never stated. However it is known that Garlic could be sadistic and vengeful as it's explicitly stated his creation of the Dead Zone was for people who crossed him and he wished to make suffer before ultimately killing them, such as when he felt the former Guardian and Kami had tried to deny him his goal of being the the ruler of Earth. His relationship and feelings for his son are never elaborated on though based on Garlic Jr's desire to avenge his father it can be assumed they were on good terms.

The full depth of abilities Garlic had are never explored in great detail but it is said he created a empty and near inescapable pocket dimension known as the Dead Zone for the enemies he wished not to simply kill but to torture until their death within the void. This particular power was passed down to his son later on. While not directly stated it can be presumed he had the standard powers found within the series that includes basic energy blasts and superhuman strength and durability. Another possible power is the ability to increase both his size and strength due to the fact that seems to be a standard of his race known as Makyans. 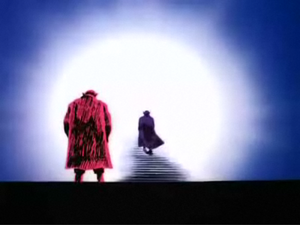 Garlic being denied his desire.

Garlic as he is about to be sealed.