Gather the Dragon Balls so Garlic Jr. can wish for immortality (successful).

Garlic Jr.'s Clan is an army of Demon Clansmen under the command of Garlic Jr. and the antagonists of the movie Dragon Ball Z: Dead Zone as well as the "Garlic Jr." filler arc in the anime.

Garlic Jr.'s father, Garlic, competed against Kami for the throne of Guardian. The earlier Guardian chose Kami as the new successor instead of his father. This caused Garlic to lead a rebellion, only for him to be imprisoned by Kami in the realm of darkness. This left Garlic Jr. with a deep feeling of resentment and desire for revenge.

Garlic Jr.'s first action is to send his minions Nikki, Ginger, and Sansho, to gather the Dragon Balls so he can wish for immortality. However, in the process, they kidnapped Gohan for the Four-Star Dragon Ball attached on his cap and hurt Chi-Chi, causing Goku to go after them.

Garlic Jr. soon gets his wish for immortality granted, right around when Goku and Kami arrive. While Garlic Jr. and Kami settles their score Goku, Krillin and Piccolo fight Garlic's minions and defeat them.

Garlic Jr. then uses his new powers to transform into a larger and more muscular form to fight both Goku and Piccolo. When Goku and Piccolo starts beating him back, Garlic Jr. opens up a portal to the Dead Zone to trap them in the void. However, Gohan's hidden power awakens, and Gohan knocks him into the vortex, trapping him forever. 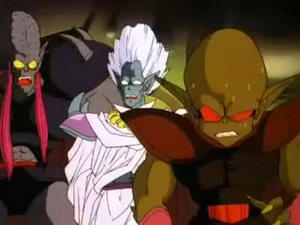