Take over the world.
Get revenge on Mordecai and Rigby (both failed)

Garrett Bobby Ferguson (G.B.F.), also incorrectly referred to as Giant Bearded Face or Giant Beardo Face, is one of the main antagonists of the animated series Regular Show. He is the main archenemy of Mordecai and Rigby.

He was voiced by Sam Marin.

He was also the universe record holder for an arcade game called Broken Bonez. That is until he was dethroned by Mordecai and Rigby which caused him to die in an explosion of goo. He is a parody of the world renowned video game highscore champion Billy Mitchell, who currently holds the record for playing a perfect game of Pac-Man. Garrett also appeared in Video Game Wizard, but as a bronze statue. The Ferguson Convention Center is highly probable that it was made due to him, since he was known to be extremely talented at video games.

However, his son, Garrett Bobby Ferguson Jr., later destroys the park to create Exit 9B to summon all villains from episodes past, even his father. But after the gang team up with the help of numerous allies, G.B.F. is eventually sent back into the portal with the other villains. Before he die again, he said to his son that he's disappointed in him for being fooled by Mordecai and Rigby.

Garrett Bobby Ferguson made a cameo in "Can You Ear Me Now?" as an incriminating witness where he testified in court against Mordecai and Rigby.

G.B.F. appears to be a giant floating head with long, brown hair, and a beard, who can grow arms, and legs. His face closely resembles that of Billy Mitchell, an electronic sports player whom has been claimed by some as the, "greatest arcade-video-game. 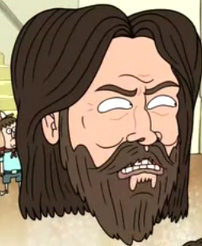 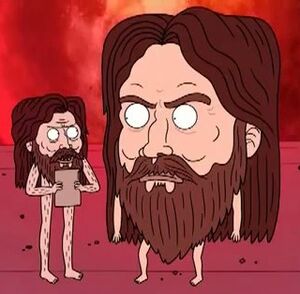 Garrett with his son. 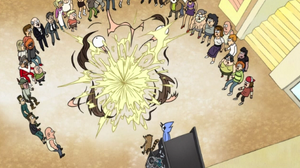 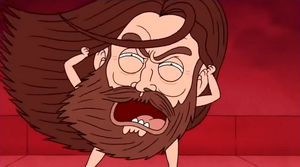