Garthan Saal, also known as Supernova or Nova Omega, is a former member of the Nova Corps turned into an enemy of the Avengers, Nova and the Guardians of the Galaxy.

Garthaan Saal contained the power of the entire Nova Corps within his body which increased him to the size of a giant and drove him mad. Supernova's desire for revenge against Nebula for devastating Xandar led him on a quest to track her down and exact his revenge. He had heard that Nebula had recently been a member of the Avengers (in actuality this was a temporal counterpart to Kang's long lost love who assumed the guise of Nebula).

Supernova first attacked the Avenger Starfox (another alleged relative of Nebula's) in space which led to a confrontation between Supernova and the combined forces of the Avengers, Fantastic Four and fellow surviving Xandarian Firelord (a former herald of Galactus). Supernova was only defeated by tricking him into the timestream to find the woman he believed was Nebula as she had been lost in the timestream during a previous encounter with the Avengers.

Years later, Garthan Saal returned from the time stream even more crazed. He had come to realize that there was a small sliver of the Xandarian Nova Corps power that was still housed within the earthling Richard Rider, a former member of the Xandarian Nova Corps and at that time a member of the New Warriors. Supernova came to earth and drained Nova of all his powers effectively killing him. Richard was resurrected thanks to another surviving Xandarian (and former herald of Galactus) named  Air Walker. Air-Walker and Firelord joined Nova and the New Warriors into a battle in space with Supernova. During the battle Supernova tried to drain a powerless Richard Rider again but this led to Richard himself having full control of the Nova Force. Nova was convinced by his friends to relinquish the power and use it to reboot the Xandarian Worldmind (a super computer that serves as a repository of all Xandarian knowledge, culture and power). Having done this the Worldmind resurrected the Xandarian race and Nova Corps was reborn. Nova was given more power but eventually was depowered again at which point Garthaan Saal became the Nova assigned for Earth and took the name Nova Omega. His appointment caused great friction between him and the depowered Richard Rider. Garthan began tracking Volx the queen (and mother) of the Dire Wraiths. Volx murdered Garthan, who returned the Nova force to Richard Rider.

Malik Tarcel (a temporary Nova Prime during the War of Kings storyline) was captured by Shi'ar forces and tortured. After the torture was over, a man claiming to be Garthan Saal arrived to rescue him and.

It is yet unknown what he did with Malik afterwards.

Garthan Saal appeared in the 2014 Marvel film Guardians of the Galaxy, where he was portrayed by Peter Serafinowicz (who was known for voicing Darth Maul). However, as opposed to his original comic counterpart who was a villain, Saal is presented as a hero, serving as commander of Nova Corps' fighter fleet.

Saal first appeared when the Nova Corps tried to contact the Kree fanatic Ronan about the latter's attacks. He would later arrest the Guardians when they to fight each other for the possession of the Orb (which contained the Power Stone) However, the Orb gets stolen by Nebula, who delivers it to Ronan as he intends to use it to destroy Xandar.

Fortunately, the Guardians escaped from prison and conspired with the Yondu Ravager Clan to fight back against Ronan and his Sakaaran forces with their ships. Deciding that he would have to take his chance helping the Guardians, Saal gets his fleet to help the Guardians and Ravagers fight back against Ronan's army. During the fight, Saal has his fleet to create a large shield in order to prevent Ronan's ship from entering into Xandar. Unfortunately, Ronan used the power of the Orb to break the shield, killing Saal and his fleet in the process. Eventually, Saal and the fleet's deaths were avenged when the Guardians took the Orb and used it to kill Ronan for good. 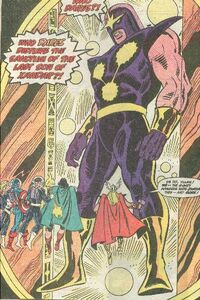 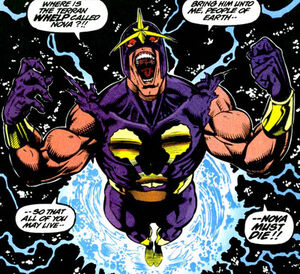 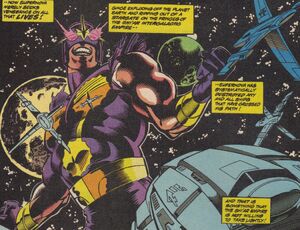 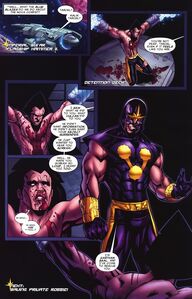