Garurumon, or BlackGarurumon, is a minor antagonist in the animated TV series Digimon Data Squad.

In Digimon Data Squad, BlackGarurumon was referred to as Garurumon. Garurumon came to the Real World as an Elecmon to steal electricity. Then Elecmon became Garurumon and easily wiped out Gaogamon and Sunflowmon, due to Marcus's stubborness about fighting.

Marcus fought Garurumon, but was no match for the huge beast. Suddenly, Agumon showed up and gave Marcus his Digivice, allowing him to Digivolve to GeoGreymon and destroy Garurumon once and for all.

Unlike the original Garurumon from the previous season, BlackGarurumon is black instead of white and has silver stripes and yellow eyes, but Garurumon is still a Champion Level Digimon. 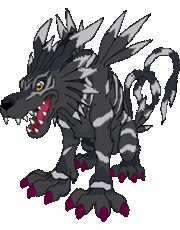 Retrieved from "https://villains.fandom.com/wiki/Garurumon_(Digimon_Data_Squad)?oldid=3525227"
Community content is available under CC-BY-SA unless otherwise noted.