Your Turn To Die -Death Game By Majority-

Host of the 2nd Main Game

Control over the facility devices

Power over the role cards

Make sure that the main game occur as planned (succeeded).

Evil Creator
Gashu Satou, also known as The Receptionist Doll, is the main antagonist in the second chapter of the RPG Maker game Your Turn To Die -Death Game By Majority-. He is initially believed to be just a doll whose role was to trade and explain the prizes on the prize exchange, but he is revealed to be human and an important member of the organization that kidnapped the main characters.

Gashu is a researcher of humans negative emotions. at some time in the past, him and his family got involved with the organization behind the kidnappings in the game. Gashu, with the help of Safalin, created the human doll Rio Ranger, who was supposed to be his masterpiece. Gashu removed all the positive emotions of Rio, believing that the negative emotions is what makes him more human.

He is the father of Kai Satou, a participant in the death game, who joined it in order to try and stop it. They have no interaction in the game, but it's believed from messages left by Kai on his laptop that his relationship with Gashu wasn't good, as he didn't even felt like he had a family.

During the events of the death game, Gashu is for the most of the second chapter stationed in the balcony of the prize exchange, offering prizes and explanations to the participants. He reveals himself to be more than that when Rio Ranger steps out of line, killing him with a head shot, and thus acting as the floor master after Rio and eventually the host of the 2nd main game.

When Sara and Keiji find out about the chip on Rio Ranger's head that could disable the facility securities, they go to the medical office where they find a passage where they find Safalin with a temporally revived Rio's head. After Ranger dies for good, Safalin accepts to give them the chip, as she doesn't want the death game to continue anymore.

After Sou uses the chip to hack the facility security, the group walks through what they believed to be the exit, only to discover in the end that the passage to the outside was blocked by rubble long before the death game's beginning. Reko, in a rage, tries to attack Gashu, he says that this action was futile, as he shows that the floor masters also have collars, saying that they were kept captive as well.

During the role card trades, Gashu waits until the last trade to manipulate the sacrifice card, forcibly trading her from Sara to Nao Egokoro, the only non-candidate to win the game still alive.

This transgression is discovered by the participants and exposed during the final vote of the 2nd main game. The group believed that exposing Gashu's transgression would result in the main game being postponed, but Gashu makes sure that this doesn't happen, killing himself with a shot in the head, thus continuing the main game as it is written on the floor master's code, succeeding his plan of eliminating Nao.

Gashu is a gaunt man of average height, he has dark eyes and short brown hair, his crab like mustache earned him the nickname Uncle Crabstache by Gin Ibushi. Gashu, much like Safalin and Sue Miley, has a outfit that lightly resembles sweets, specifically chocolate chestnut, as he wears a brown blazer jacket and matching pants over a brown and tan striped shirt. Two of the his shirt strip lines has a row of yellow circles. In his left jacket pocket he has a small plant that could be a lucky charm of some sort, he also has a buttom pinned on the right side of his jacket, that contains the hiragana letter 'ぽ Po' on it.

Different than Sue Miley and Rio Ranger, Gashu is a extremely calm and collected individual, even during the events of the death game, he shows no emotion whatsoever while acting as the receptionist doll, and while acting as the host of the second main game he only for a brief time becomes angry and shows concern when his transgression is exposed, quickly returning to his calm and collect self. He shows a disturbing grin seconds before killing himself. 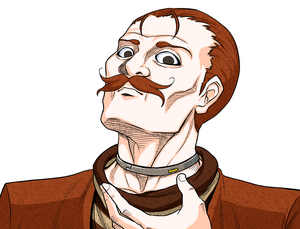 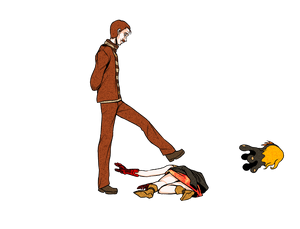 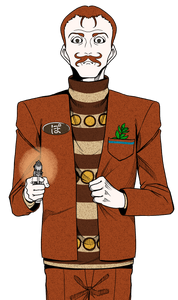 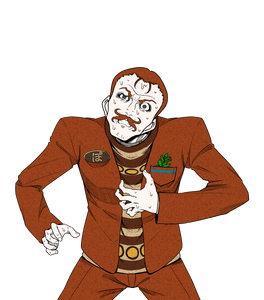 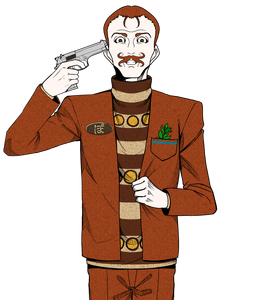 Add a photo to this gallery
Retrieved from "https://villains.fandom.com/wiki/Gashu_Satou?oldid=3773414"
Community content is available under CC-BY-SA unless otherwise noted.