Drinking beer.
Throwing Maurice out of the tavern.

Gaston's Buddies (named Tom, Dick, Stanley and Gramps) are supporting antagonists of Disney's 30th full-length animated feature film Beauty and the Beast (which is based on the 1756 French fairytale of the same name by the late Jeanne-Marie Leprince de Beaumont), and its 2017 live action adaptation of the same name. Just like their friend LeFou, they are eager to praise and please Gaston as they look up to him as their leader, just like most of the villagers.

Stanley and Gramps are first seen in the scene depicting Gaston's failed wedding. When Gaston has arrived, Gramps chatted up with the somewhat angry, irritated, and argumentative priest while Stanley snuck a bite of the wedding cake, much to the baker's chagrin. They also laughed alongside everyone else (exempting Claudette, Laurette, and Paulette, who ended up crying out of devastation that Gaston was marrying Belle over themselves and presumably keeping them in the dark about it) when Gaston thanked everyone for attending the wedding and then commented that he has to go in and propose to Belle first.

The four men are first seen together at the tavern, where they help LeFou cheer up a depressed Gaston through a song idolizing him and emphasizing his strengths (perhaps overemphasizing), with Stanley getting his leg bitten by Gaston as the latter starts to beat them all up in a wrestling match. They also observed the Bimbettes during their scene in the song, with Stanley smirking at Tom and Dick gawking at them. When Maurice arrives and pleads Gaston to help rescue his daughter, they snicker and mock at his description of the Beast. After Gaston agrees to help him, Stanley and Dick grab him and throw him out of the tavern before returning inside and talking about how "crazy old Maurice" amuses them, giving Gaston the idea of blackmailing Belle into saying her marriage vows. They seemed to be aware of and support Gaston's resulting plan to blackmail Belle by incarcerating Maurice under false pretenses afterwards, apparently eavesdropping on Gaston's whispering of the plan with their tankards.

Later, they are seen among the rioters (most likely in on Gaston's scheme) when Monsieur D'Arque and his men arrive to take Maurice to the Asylum D'Loons. However, Belle foils this by using a magic mirror to reveal the Beast's existence, which made the men and the other villagers realize that Maurice was telling the truth. Despite Maurice's release, Gaston (in an act of jealousy) manipulates the mob into helping him kill the Beast. To that end, Stanley and Dick throw Maurice into his basement, before Gaston throws Belle inside as well and locks them to keep them from reaching the Beast before the mob can do it.

On their way to the Beast's castle, the mob manages to chop down the tree to use as a battering ram to force open the castle doors. Unknown to the rioters, Cogsworth’s defensive plan is to led an ambush on the invading villagers while Gaston goes hunt down the Beast himself without being noticed. During the battle, Dick was wielding an axe and found himself between a pair of drawers and prepares to strike, only to be knocked in the face between their slamming shelves. Later, he and Gramps attempted to subdue the Wardrobe, but were easily defeated; Dick being beaten senseless and Gramps being forced inside the Wardrobe's closet and pushes back outside dressed up like a woman looks like Marge Simpson, much to his intense fear and embarrassment. Tom yanks at Fifi's feathers, but only to have his rear end burned by Lumière, who was successful in saving his girlfriend. Soon after, Tom, LeFou, and Stanley then chase Sultan into the kitchen, believing that they had him cornered. However, they finally retreated out of the castle with the rest of the rioters after being scared away by living knives and Chef Bouche with raging fire. Like Lefou, it has left undisclosed if the four buddies and the villagers ever found out that Gaston died after his battle against the Beast, but it is likely that Gaston's absence from then on would give them that exact message.

In the live action adaptation, Tom, Dick, and Stanley are the only three to be present, while Gramps is absent. They are first seen observing Belle and later seen in the bar as LeFou is singing everyone's praises for Gaston. They also laughed at Maurice's claims about the Beast, though Gaston decides to tag along in hopes of gaining Maurice's approval to marry Belle. However, Gaston decides to leave Maurice for dead by leaving him to die in the woods forever, so that he can have Belle for himself. Eventually, Maurice is saved by the local beggar woman Agathe and returns to the village to confront Gaston for attempted murder, but Gaston convinces the townsfolk that Maurice is insane and orders Tom, Dick, and Stanley to assault him.

Tom, Dick, and Stanley are about to put Maurice into the local asylum carriage to have him locked away, but Belle returns and proves her father's claims by using the magic mirror to reveal the Beast's existence, making the men and other villagers realize that Maurice was telling the truth. However, Gaston furiously snaps out by stealing the magic mirror and playing off the villagers' fear of monsters and sorcery into helping him slay the Beast. To that end, Tom, Dick and Stanley lock up Belle in the carriage with her father before joining up with Gaston and the other villagers to raid the castle, though Maurice manages to free himself and Belle before allowing the latter to head back to the castle. During the battle between the servants and villagers, Cogsworth assembles an army of books that he orders to attack a group of villagers in front of the Three French Stooges that draws their attention to Cogsworth, but as they corner him, Garderobe intervenes by dressing them in ball gowns with ribbons. Tom and Dick yell in horror in their new outfits and flee away in terror, but Stanley (unexpectedly) admires his new outfit and gratefully nods to Garderobe before leaving peacefully as Garderobe tells him to be proud of himself.

Following Gaston's death, Belle eventually professes her love for the Beast, which inspired an arriving Agathe (who turns out to be the enchantress who is responsible for the spell) to uplift the spell and turn the Beast and his servants back to normal before restoring the villagers' memories (including Tom, Dick and Stanley) of the castle. With the castle free from the curse, Stanley appears in the ending in which a ball is taking place inside the castle, where he inadvertently ends up dancing with LeFou.

Beauty and the Beast Marvel Comics

Gaston's buddies made a brief appearance in the ending of Issue 3, where they were seen getting a drink at the bar area of the Tavern. 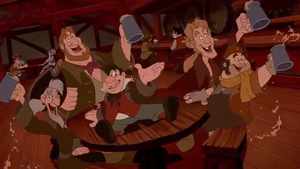 The buddies helping LeFou in cheering up Gaston. 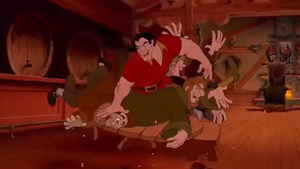 Gaston violently wrestling the buddies to overemphasize his strength. 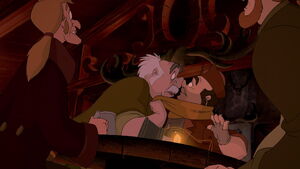 Tom's collar being held by a traumatized Maurice. 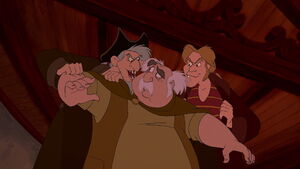 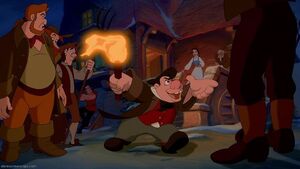 Stanley watching as LeFou calls out Maurice for his "crazy" behavior at the tavern. 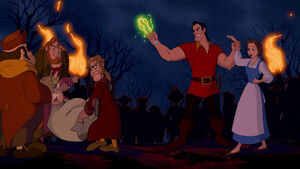 Gaston ordering his buddies to lock Belle and Maurice in their basement, keeping them from warning the Beast. 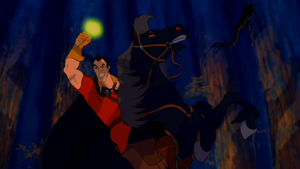 "We'll lay siege to the castle and BRING BACK HIS HEAD!!" 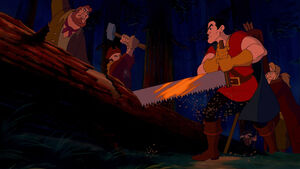 Gaston and his buddies having cut down a tree, in order to use its trunk to break into the castle. 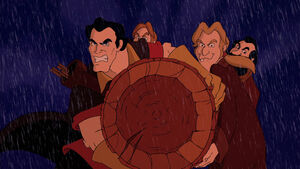 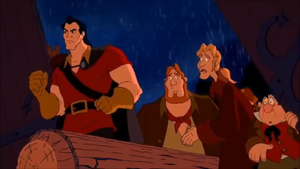 LeFou and the buddies being uncomfortable as Gaston leads them inside the castle. 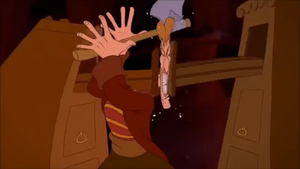 Dick being smashed in the head by cupboards. 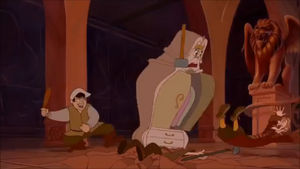 Dick being knocked out by the Wardrobe. 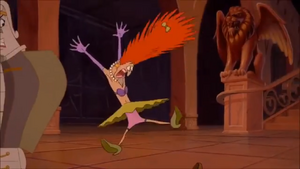 Gramps screaming in terror after the Wardrobe puts him in a ridiculous dress. 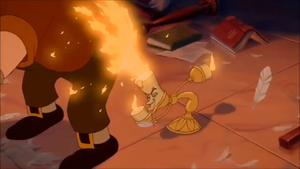 Tom getting his rear end burned by Lumière. 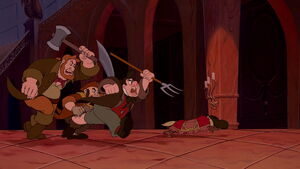 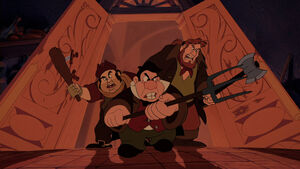 LeFou, Tom, and Stanley cornering Sultan in the kitchen. 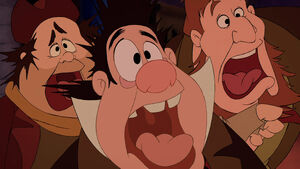 Tom, Stanley and LeFou screaming in fear as Chef Bouche is about to attack them. 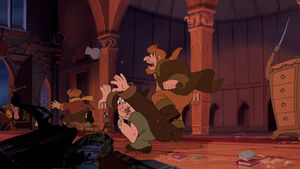 LeFou fleeing away with the rest of the rioters in defeat.