Prepare endangered or rare animals into tasty and delicious meals.

Defeat the Wild Kratts once and for all.

Chef Gaston Gourmand, more commonly referred to as Gourmand, is one of the main antagonists (alongside Zach Varmitech, Donita Donata, and Paisley Paver) of Wild Kratts. He is a traveling chef, or he used to be, until he lost his chef's license and got fired from his gourmet cooking job for cooking rare and endangered species. Though he still travels around the world doing so, his restaurant doubles as his truck and sometimes a boat that he typical parks near a source of water. His main weapons are his cooking utensils like his meat cleaver and his Dough Blaster which he uses to trap the Wild Kratts and damage their Create Power Suits, he also claims he never cooks the same dish twice. He hates making “usual” dishes like grilled cheese, peanut butter and jelly sandwiches, etc. He was voiced by Zachary Bennett who also voiced another antagonist from the show, Zach Varmitech.

Gourmand is always confident that he will succeed, despite always being foiled by the Wild Kratts. He is clever and cunning, and has tricked and outsmarted the Wild Kratts several times. He often places the Kratt brothers in life-threatening situations, such as leaving them to be stung by African honeybees in the episode "Honey Seekers" and setting a trap with rattlesnakes in the episode "Opossum in My Pocket". His overconfidence also leads him to think that glaring at animals will scare them off.

Gourmand has a strong yet dark sense of humor. He enjoys mocking the Wild Kratts when they are not in his sight and laughing when they suffer through the dilemmas he brings them into. In particular, in his debut episode, Gourmand constantly referred to Chris Kratt as the "side dish" for his platypus egg omelet.

Gourmand enjoys bragging about his abilities and accomplishments. He claims that he never cooks the same dish twice and that his nose "can match a seasoning to anything". In the episode "The Hermit Crab Shell Exchange", Gourmand claims that he is stronger than the Kratt brothers because of a special vitamin program he said he is taking.

Gourmand likes to hum and sing, although he often does so quite off-key. On a lesser note, he is fond of trains, affectionately calling them choo-choos.

Gourmand is a gourmet chef by profession, but he lost his gourmet chef license and got fired from his gourmet cooking job due to his use of endangered species in his dishes. He claims his license being revoked was due to jealousy, and can not understand why one would lose his or her license over cooking endangered species. He is the only villain whose plans actually involve directly killing the animal, in which he tries to cook them into food and serve it to other people or himself. Even when Gourmand is not using rare or endangered animals in his recipes, he still tends to use animals that most people would not consider using, for example, he stated that he once made a dung beetle omelet, and another time, he made toffee-coated grasshoppers.

Unlike other villains in Wild Kratts, who are unable to apply an "inquiry-based approach to life and learning", Gourmand, having spent much more time in the wilderness, possesses vast knowledge of the natural world, to the point of rivaling Wild Kratts. Gourmand uses this knowledge to trick the Wild Kratts and to find his all-natural ingredients. He also understands the Wild Kratts when they talk about the importance of the natural world, although he could care less about what they have to say.

In contrast to the other villains and even the Wild Kratts, Gourmand depends little on futuristic and science fiction-like equipment. His weapons arsenal mainly consists of cooking utensils, dough, and his nose, which he uses to sniff out ingredients. Occasionally he uses nets and cooking utensils modified into weapons. Gourmand is the only villain who does not rely on robotic assistants or henchmen, and he can and will do his own dirty work, in contrast to the other villains. On one occasion, though, he had to obtain a high-tech submarine from Zach. Aside from this, much of his equipment is comparatively primitive.

Gourmand is very agile, able to climb quickly, jump high and far and even perform acrobatic flips. He is also incredibly strong, able to deal with most animals. At one occasion, he casually lifted and relocated an adult bear that was sitting in his path, and on another occasion, he easily lifted a fairly large boulder (almost his own size) and twirled it on his finger.

Gourmand has several means of transportation, most of which feature a fold-out restaurant complete with a kitchen, a few tables and chairs, lighting, and decorative plants. They include a white and gray camper, a red-hulled fishing boat, a white and gray jet, and a white and gray snowmobile. Gourmand is never afraid to leave the comforts (or lack thereof) of his vehicles.

Gourmand can speak French, although he speaks it without an accent and constantly mispronounces words and phrases. French words and phrases he spoke include fantastique (fantastic), au revoir (goodbye), and les frères Kratt (the brothers Kratt).

Gormond's first appearance was in "Platypus Cafe", where he overhears Chris and Martin talking about how platapie are the only egg-laying mammals and gets the idea to make a "Platypus Egg Omelet". So he floods the platypus' home which flushes her eggs out and injures her too. He also invites Zach Varmitech and Donita Donata to his restaurant.

In "Honey Seekers", he invites Zach to partake in his latest dish, which involves a honey badger. When he sees the Kratts Brothers have gotten involved he creates a disturbance by destroying a beehive making the bees think they did it. Pretty soon he lets them lead him right to the honey badger, which they don't know

In "The Gecko Effect", Zach calls Donita and Gourmand to rub his phony-surround-Up inventing the Wild Kratts miniaturizer in their faces.

In "Raptor Round Up", Gourmand had captured several species of raptors from all over the world to cook them and make fried raptor wings.

In "Happy Turkey Day", Gourmand is hunting for wild turkeys for Thanksgiving dinner. But when Martin's Creature Power Suit malfunctions and Gourmand thinks he's a giant turkey and tries to hunt him down.

In "To Touch a Hummingbird", Gourmand plans to hunt for a hummingbird's nest and make chocolate covered hummingbird eggs.

In "Rainforest Stew", Gourmand is in the central American rainforest capturing all sorts of rainforest animals to make rainforest stew. 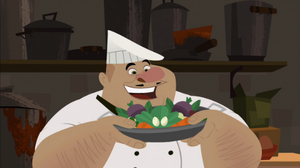 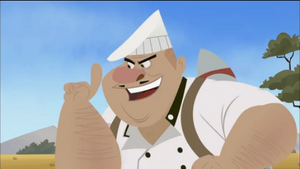