A hunter and a town "hero".

Archery, marksmanship, manipulating townsfolk, great strength, and sex appeal to every woman in the village, except Belle.

Hunting, flexing his muscles, showing his chest hair, drinking, fighting, spitting, eating five dozen eggs raw and in the shell, stomp around wearing boots, and receiving adoration from women and praise from the rest of the town.

Kill The Beast (succeeded, sort of, but failed) and marry Belle (failed), even if he must resort to blackmail.

Gaston Legume is the main antagonist in the 1991 Disney film Beauty and the Beast. He was voiced by Richard White (who is an opera singer plus Reverend). Gaston is depicted as narcissistic, egomaniacal, and rude, and is willing to go any length to get what he wants. He is also very strong, able to lift a bench with the three bimbettes on it with one arm to flex his other arm's bicep. While many of the girls are obsessed with him, Belle is the only one smart enough to know he is not husband material.

At the beginning of the story, Gaston is known to be as the village's town hero and is well-respected by much of the villagers and the object of affection of every girl in the village, except for Belle. He tries to propose marriage to Belle, who respectfully refuses. Depressed and upset he tried to do whatever it takes to marry Belle.

Gaston knows that this act will rouse little suspicion because Maurice already seemed to be insane to the rest of the town, raving about a monstrous Beast holding Belle as his prisoner (thanks to a deal she made with the Beast). Even when D'Arque comes to take her father, Belle still refuses to marry Gaston, and proves that the Beast indeed does exist by causing him to appear on the magic mirror that the Beast gives her which proves to be a mistake: It was then the whole town (including Gaston) realized that Maurice was right about his claims of the Beast's existence.

Upon seeing this, Gaston suspects that Belle has feelings for the Beast (since he had let her go to help her father). Out of jealousy, Gaston plays off the villagers' fear to incite them to form a mob to lay siege to the Beast's castle. Though the mob end up being warded off by the castle's enchanted servants for good, Gaston himself finds the Beast in the West Wing, and fights him. The Beast doesn't fight back, as he feel disheartened that Belle won't come back for him. Eventually, Belle does return with Maurice, and upon witnessing this, the Beast regains his will to defend himself, engaging into a fight with Gaston.

After the Beast wins the fight, he is about to kill Gaston, but doesn't, because he had become more human through his love for Belle. He throws Gaston aside, angrily telling him to leave the castle and never return. Just before the Beast can comfort Belle, Gaston jumps onto the Beast and stabs him with a dagger. The Beast swings his arm backwards in pain, causing Gaston to lose his balance and fall screaming from the roof to his death.

As stated earlier, Gaston is a rude, egomaniacal narcissist who will go any length to get what he wants, even if it involves bribes or blackmail. He is very narrow minded to the extant that he dislikes reading.  This is due to the fact that he regards ideas as dangerous, and is content to go through life not thinking about it.  He is very handsome and muscular and he is also well respected in the village- he is able to rouse a mob whose intent is to kill the Beast. This goes to show that he is also very vengeful, since he suspected that Belle, whom he wanted to marry, had feelings for the Beast.

Despite Belle calling him "brainless", he is not the least bit stupid, as he can come up with very clever plans from time to time.

Gaston is considered one of Disney's most popular villains. He ranked 11th in an official poll, and the Nostalgia Critic placed him as the 5th best Disney villain, citing him as being different from most other Disney villains in that he is not pure evil from the start. Fans on the internet often jokingly idolize him similar to how the townspeople do in the movie, giving birth to the "No one (X) like Gaston" meme, and the "Gaston" song in particular is a very popular source for YouTube Poop.

As a specimen, yes, I'm intimidating

Gaston falling to his death. 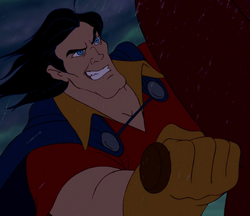 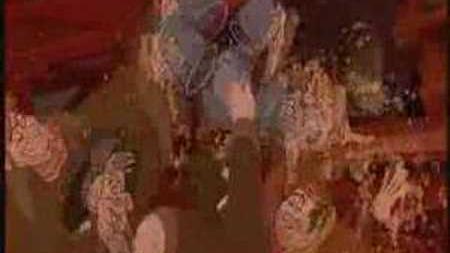 Beauty and the Beast - Gaston

Beauty and the Beast beast fight scene, transformation and ending
Add a photo to this gallery
Retrieved from "https://villains.fandom.com/wiki/Gaston_LeGume?oldid=695136"
Community content is available under CC-BY-SA unless otherwise noted.