Aid Myotismon with tracking down the 8th DigiDestined (formerly).

Gatomon (in Japanese: テイルモン Tailmon) is an antagonist turned protagonist in Digimon Adventure and its 2020 reboot. Once a minion of Myotismon/Millenniummon's army, she eventually found her true destiny as one of the Digimon partners of the Digidestined.

Gatomon is a small Champion Level Digimon that looks like a white cat with a purple stripes on her tail, with purple tips of her ears, it fact gato is Spanish for cat. She wears yellow gloves with red or orange stripes and three claws on her front paws. She suppose to have scars underneath her gloves. Her tail sometimes has a ring which gives her the ability to Digivolve into Angewomon. she also can stand on all fours or on her 2 hind feet.

Gatomon was suppose to be one of the eight Digimon for the Eight DigiDestined but Gennai accidently dropped her Digi-Egg, because one of the Dark Masters, Piedmon attacked the castle in which the eggs were being taken care of. When she hatched, she spent a few years waiting for someone, but that someone never came. When she Digivolve into Salamon, she decided to search for that someone. Eventually she encountered a castle, which was owned by Myotismon. Myotismon did take her in but he didn't know that she was the 8th Digimon, but instead of caring for her, he decided to punish her if she stepped out of line and if she show Myotismon her angry eyes, and also tortured her by whipping her with his Crimson Lightning attack (Japanese version only). She eventually forgot who she was looking for and began working for Myotismon.

When Gatomon and Wizardmon were looking for the tag and the Crest of Light, they knew that Myotismon has the tag and crest. However Myotismon knew that someone was going to betray him so he made a few copies of tag and crests. They tried to fight Myotismon but they were no match for him. At the same time Myotismon found out that Gatomon is the 8th Digimon. Gatomon then got captured by Myotismon and used her to find out who is the 8th DigiDestined. When Kari turned herself in to prevent others from being hurt, Gatomon tried to convince Myotismon that she wasn't the 8th DigiDestined, but it didn't work. When Wizardmon sacrificed himself, Gatomon Digivolved into Angewomon and killed Myotismon with her Celestial Arrow attack.

Gatomon is the reincarnation of the Celestial Digimon Ophanimon, who died during the was against Ghoulmon and Millenniummon. Upon being reborn, Gatomon was found by Millenniumon's minions who corrupted her into SkullKnightmon who initially serves Devimon. 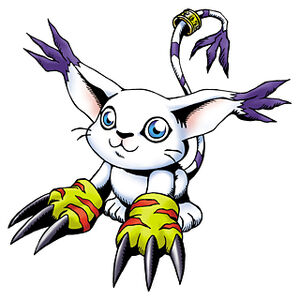 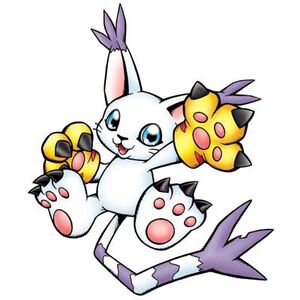 Tailmon/Gatomon without her Holy Ring on her tail.