Retain control of his breakdown marriage with Kathy Beale

Win the trust of Sharon Watts (both failed)

Gavin Sullivan is a major antagonist in the BBC British soap opera EastEnders who appeared from 21 August 2015 to 8 July 2016, during which he served as the show's secondary antagonist.

He is the seductive third husband of Kathy Beale, the biological father of Sharon Mitchell, grandfather of Dennis "Denny" Rickman Jr and Kayden Taylor, stepfather of Ben Mitchell and Ian Beale, and an enemy of Phil Mitchell who caused trouble for them and their community of Albert Square until he was eventually caught out and arrested for his crimes.

He is portrayed by Paul Nicholas, who is known for playing Vincent Pinner in British sitcom Just Good Friends.

Gavin Sullivan was first mentioned in 2000 after Kathy Beale left Walford for South Africa with her and Phil Mitchell's son Ben. It was later believed that in 2006, Gavin and Kathy were killed in a car crash which resulted in Ben returning to Walford to live with his half-brother Ian Beale and later Phil.

However, nine years later in February 2015, it was revealed that Gavin and Kathy were alive and that the car crash was a way to escape an insurance scam and that Kathy had been in contact with Phil for some time. Kathy planned to fake her death in order to escape the controlling Gavin and return to Walford to be with Ian and Ben. However in August, after a botched money handover from Phil at St. Pancras station, Kathy runs into Gavin who reveals that he was aware of her plan to escape him and attempts to drive her to a small airfield so they can leave England. But Kathy causes the car they're in to crash, which puts them in hospital, but later Kathy discharges herself and disappears.

After leaving the hospital, Gavin comes to Walford, believing Kathy will contact Phil. He follows Phil and his cousin Ronnie to a small hotel where he grabs Kathy and flees to the airfield, but is stopped by the Mitchells and Kathy returns to Walford with Phil. A week later, it is revealed that Kathy has snuck Gavin into her hotel room and he is controlling her again. Sometime later, Gavin along with two armed men kidnap Phil and Gavin threatens to kill him if Kathy doesn't follow his instructions and give him money. Kathy tries to take money from Ian's safe but instead goes to the police to report on the kidnapping.

Ian contacts Gavin and tells him that he knows what he's been doing. It is revealed that Gavin locked Phil in a closet, but by the time the police arrive, Phil is not there due to Gavin letting him go and going on the run from the police.

On October 29, 2015, Ben confronted Gavin and told him to leave which he seemingly did by train. However, at the end of the episode, he is shown to have returned.

On October 30, 2015, Gavin comes to the Mitchell household and lock Phil upstairs and prepares to kill Kathy and Ben by setting fireworks in the kitchen with a lighter. When Phil's wife and Ben's stepmother Sharon arrives, Gavin says that he once lived in Walford and had a child whom he gave up, before revealing to Sharon that he is her biological father by saying "Hello Princess", the same greeting Sharon's late adoptive father Den Watts (who was friends with Gavin) greeted her with.

Kathy convinces Gavin to put down his lighter before Phil breaks out and overpowers Gavin and ties him up. Sharon confronted him about giving her up to which Gavin replies that Sharon's solicitor Margaret is his sister and told her not to tell Sharon about him. He also says that he gave her to Den and his wife Angie after she was born and that he wasn't cut out to be a father and thus traded her to Den (who along with Angie wished to have children) in return for a dodgy deal. Gavin also meets Sharon's son Denny and greets him with "Hello Dennis, I'm ya grandad". When Sharon decides to call the police, Gavin reveals that "Hello Princess" was his way of saying hello to her every now and again. When the police arrive to arrest Gavin, he is nowhere to be seen as Sharon let him go, believing that he wanted to be part of her life.

The next day, Gavin texts Sharon, assuring her that they will see each other soon. On Christmas Day, Gavin texts Sharon to wish her a Merry Christmas and later arrives at her house, saying her reply made him miss her. Sharon hurries him out of the house and he leaves her a silver watch as a small present. He also visits her in the hospital when Denny is involved in a car crash. He reveals that he is moving to Hong Kong and offers her a chance to go with him when Dennis recovers, but Sharon declines, promising to still keep in touch and thanking him for the present.

Gavin later returns on Valentine's Day after sending Kathy a card. He explains that things ended badly between him and Sharon during their stay with him, and he wants Kathy to help him reconcile with his daughter and grandson. Dot Branning (June Brown) then arrives at Kathy's house, and Gavin encourages her to stay and play a game of cards with him and Kathy. Dot reveals that she remembers how troublesome Gavin was as a child, and warns Kathy not to let herself be controlled by him again. After Dot leaves, Gavin starts crying and expressing how much he wants to be a part of Sharon's life, so Kathy agrees to help him rebuild his relationship with her. She talks to Sharon the next day, who reveals that Gavin hit Dennis during their stay and that is the reason why they left. However, Dennis misses Gavin and has a second mobile phone to which he only contacts Gavin. Sharon discovers this and is furious, but is later unnerved when Gavin collects Dennis from school, and realizes that he could easily abduct her son. He later recognizes Claudette Hubbard at her granddaughter Pearl's first birthday party, and later meets her in the park, threatening to expose a secret of her's if she does not get him £10,000. He later violently gropes Claudette in the street, recalling that she used to be a "minx" back in the day, and reveals that he now needs the money by the end of the week, unnerving Claudette. She arranges to meet him while her family is out and tries to pay him with sex but he still wants the money, so she strikes Gavin over the head with a candelabra. Believing he is dead, she takes him to the basement, but he later flees. He later returns and Claudette's son Vincent Hubbard tells him that Claudette is gone and offers to give him the money if he agrees never to contact Claudette again.

In June 2016, Gavin attempts to run away with Dennis however Kathy uncovers what is happening and stops him. In July 2016, whilst Kathy is walking to meet her secret lover Buster Briggs, Gavin appears and tricks her into going in his car by lying that Dennis wants to see her. Gavin takes her to a house and reveals that Dennis is not there so Gavin locks her up in an attempt to stop her from leaving. Margaret later arrives and a fight occurs with Margaret hitting Gavin with a vase. The two women attempt to escape but the doors are locked and Gavin plays hide and seek with the women. Afterwards, Gavin pushes Margaret who falls into the windscreen of Sharon and Buster car, and lies dead on the floor.

Sharon calls the ambulance for Margaret whilst she and Buster search for Kathy. Buster finds Kathy hiding in one of the rooms and Sharon discovers Gavin packing his clothes. Sharon takes the keys and tries to persuade Gavin to hand himself over. Sharon tells Gavin that she will visit him in prison and he will see Dennis so he agrees. However, when the police raid into the house, Gavin runs to the balcony attempting to kill himself. Sharon sees him and tells him that he is not brave enough to go to prison so he climbs up from the balcony. Just as Gavin and Sharon are talking, the police interrupt their conversation to arrest Gavin. Gavin holds Sharon, threatening to jump off the balcony with her if he gets arrested. However, Sharon reveals that they are over and that he'll never see Dennis, so he lets go and is arrested. 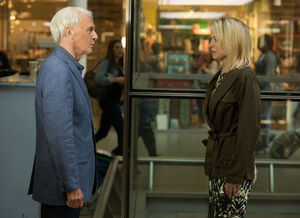 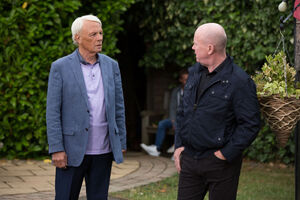 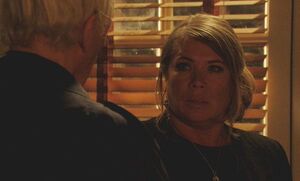 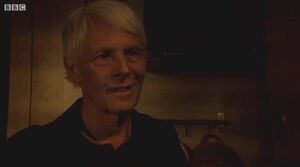 Gavin revealing to Sharon that he is her father.