be free to paint things.

Mischievous Monster
The Gamma is an antagonist in Kamen Rider Ghost. He later turns good and becomes an ally of Takeru Tenkuji and Daitenku Temple.

He is voiced by Taiki Matsuno. His suit actor and human form are played by Jiro Uchikawa.

The Gazai Gamma was summoned by Igor to assist him in his scheme to infiltrate Deep Connect, though he very quickly discovered he would much rather explore his love of painting round things than assist the Gamma in their schemes. Despite this, he was made by Igor to paint the Deep Connect building, causing the building itself to turn into how Gazai had painted it and allowing Igor to sneak aside amidst all the commotion. Meanwhile, the Gazai Gamma went around painting round things that caught his attention, indifferent to the affect his paintings had on the objects in real life. He very quickly took a liking to Onari's round head, much to Onari's annoyance. However, Takeru sensed that he wasn't really evil and was able to convince him to turn good, giving him a regular paint board to use instead of his Gamma one so he wouldn't cause mischief with his paintings. After joining Daitenku Temple, Gazai was nicknamed "Cubi-chan" by Akari.

Gazai later entered into a "slump" with his paintings, causing him to paint more realistic ones as opposed to abstract ones. He soon encountered the Onpu Gamma, who was in a similar "slump" after being harshly critiqued by Igor for the symphonies he composed. Igor then showed up and attempted to eliminate the two for being traitors, but was defeated by Jabel and slapped by Akari, driving him away. The Gazai and Onpu Gammas then decided to go on a trip to find inspiration to bring them out of their slumps, and bid a temporary goodbye to the Daitenku Temple group before leaving.

The Gazai and Onpu Gamma later witnessed Adel assimilating everyone and overriding their bodies with his visage as part of the Demia Project.

The two Gamma were later among those absorbed by the Great Eyezer in its attempt to remake the world. After the Great Eyezer was destroyed by Kamen Rider Ghost and the Great Eye left the Earth, the Gazai Gamma woke up in his pod holding a paint brush. 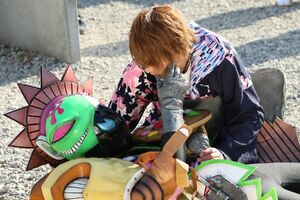 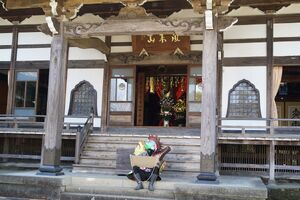 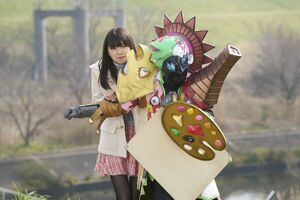 The Gazai Gamma with Kanon. 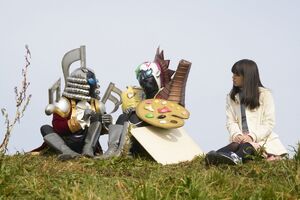 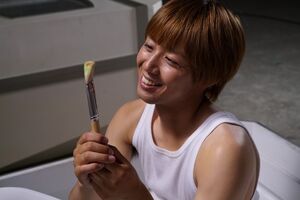