Help Jafar get the magic Lamp.

Be rewarded with riches (both failed).

Gazeem is a minor antagonist in Disney's thirty-first full-length animated feature film Aladdin, which is based on the Arabic folktale Aladdin and the Magic Lamp from One Thousand and One Nights. He is a bumbling overweight thief and appears only at the beginning of the film, serving as a small-time thief and minion to the evil sorcerer named Jafar.

He was voiced by Charlie Adler, who also played another villain Mechanicles in the Aladdin TV series, Snively in Sonic the Hedgehog (also known as Sonic SatAM), the Red Guy in Cow & Chicken, Hamilton in Disney's Tarzan, Panza in the 1996 animated film version of The Prince and the Pauper, Buck Huckster in Danger Rangers, and Starscream in the Transformers film franchise. In the 2019 live action remake, he was portrayed by Firas Waleed Al-Taybeh.

A majority of Gazeem's past is unknown, but it is known that he is a notorious thief who somehow came into contact with the evil sorcerer, Jafar. In return for his services, Jafar promised Gazeem a vast amount of treasure, and all Gazeem had to do was to locate and steal the second piece of a mystical golden scarab that acts as the key to the Cave of Wonders, where was hidden an ancient lamp containing an all-powerful genie that would make all his dark dreams come true. Blinded by greed, Gazeem agreed to the bargain, unknowing that Jafar planned to dispose of the lowly thief once he outlived his usefulness to the sorcerer.

In an unknown span of time, after killing a few people, Gazeem was able to obtain the scarab piece, though he was behind schedule on getting it.

Gazeem is first seen riding his horse out at night out in the middle of the Arabian desert to the rendezvous point where he and Jafar promised to meet. After expressing his apology for being late with his delivery, Gazeem shows Jafar the scarab piece. Jafar holds out his hand so that Gazeem can hand it to him, but the thief suppresses it, wanting to have the treasure he was promised first. This prompts Jafar's pet parrot, Iago to forcefully take the piece from Gazeem's hand to give to his master, causing the thief pain. Jafar then pulls out his half of the scarab while calmly assuring his "friend" that his end of the bargain will be upheld by vaguely stating that he will get what's coming to him. Gazeem watches as Jafar combines the two pieces together, causing it to come to life and fly out to the cave's location. Jafar and Gazeem chase after it on horseback, but then the cave's entrance materializes before them in the form of a tiger's head, causing their horses to throw them off out of fear. Gazeem stares in awe at the cave's appearance, but then Jafar grabs him by the shirt and tells him to go into the cave to retrieve the lamp at the end of the cave, promising him that all the treasure inside will be all his, much to Gazeem's great delight. He then throws the thief in the direction of the cave, which Gazeem approaches with a greedy grin.

Gazeem walks over to the cave's mouth and peers down its throat, seeing the sand inside form into stairs. Gazeem attempts to carefully enter, but is then knocked back by the cave's breath. The Tiger God then demands to know who had awoken him, and the frightened Gazeem introduces himself as a "humble" thief while bowing to it. The guardian then warns Gazeem that only one may enter the cave: a "Diamond in the Rough". Not knowing what the guardian meant by that, Gazeem hesitates and turns to Jafar for an answer, but the sorcerer ignores his concern and simply demanded him to continue forward with his mission. Though frightened, Gazeem obeys this order and proceeds to climb the tiger's bottom lip into the cave. Gazeem fearfully sets his foot on the first stair and then breathes a sigh of relief when nothing happens. Suddenly, however, the cave roars furiously that someone unworthy had dared to enter his domain. Terrified by this, Gazeem frantically tries to escape, but the cave moves too fast for him and its mouth clamps shut on top of him, killing the thief immediately, much to Jafar's horror and anger. As it falls inactive again, the Tiger God instructs Jafar to seek out the "Diamond in the Rough".

Despite being horrified by Gazeem's death, Jafar shows no remorse over the loss of his diminutive minion, saying that he was "obviously less than worthy"; even Iago admitted that he considers Gazeem as a bozo. Spurred by Gazeem's failure, Jafar becomes determined to find the one worthy of entering the cave, who turns out to be none other than Agrabah's street rat, Aladdin. 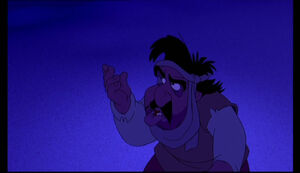 Gazeem apologizing for his late arrival. 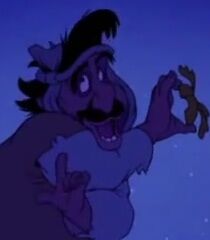 Gazeem with the golden scarab amulet. 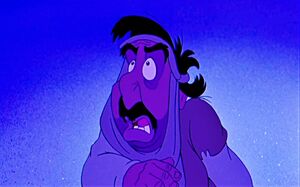 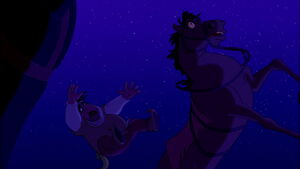 Gazeem falling off of Darwish. 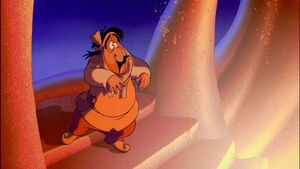