Right-hand and assistant of Richmond Valentine

Help Valentine succeed in his plans (both failed).

She was portrayed by Sofia Boutella, who also played Ahmanet in The Mummy (2017).

Gazelle is the assistant and right-hand of Richmond Valentine, and she helps him in every way in the Valentine Corporation's plot to eradicate mankind (which he deems as a virus to the world) using special SIM cards developed by his company that makes people become excessively violent. When Gazelle sees that Kingsman agent Harry Hart and his apprentice Gary "Eggsy" Unwin are attempting to prevent his scheme, nothing stands in her path with her two prosthetic legs which give her superhuman strength and allows her to kill her enemies with ease.

Following the massacre of a hate group's church (arranged by Valentine himself), Eggsy soon learns of Valentine's plan after killing his mentor Chester King for being in league with Valentine. As such, he, Roxy and Merlin head to Valentine's mountain base to stop Valentine from executing his plan. Roxy will pilot a twin balloon vehicle in order to destroy Valentine's satellite with a missile, while Eggsy and Merlin will stop Valentine. During the raid, Eggsy is pinned down by enemy gunfire in front of one of the prison cells housing the kidnapped VIPs, and Merlin triggers the implanted devices, causing them to explode, killing all of the VIPs who were part of Valentine's plan.

Confronting Valentine, Eggsy is attacked by Gazelle, and the two engage in a climactic fight. The fight demolishes most of the room, and both combatants appear completely evenly matched, but Eggsy introduces an element of cunning and poisons her with a blade hidden in his shoe; killing her instantly. He then grabs one of her prosthetic legs and uses it to kill Valentine.

Gazelle was very relaxed, calm and easygoing by nature, never losing her temper. She appears to cling on to Valentine in a similar way that Oddjob clings to Goldfinger: however, unlike Oddjob, Gazelle actually speaks and appears to have a genuine personality.

She is very intelligent when it comes to strategy, and appears to be capable of questioning the authority and ideas of her boss. She is extremely loyal to Valentine, and will literally risk her life for his safety.

She carries out his orders mostly without question, and will kill any who dares threaten him: she throws herself upon him when Eggsy shoots at them, and moments later throws herself at the boy to fight him. In combat, she was incredibly powerful, dangerous and confident, the ultimate opponent for even the most hardened of Kingsman agents - ironically, in combat is the only time she shows anything close to frustration.

Gazelle meeting Professor Arnold, after slicing the Kingsman agent Lancelot in half

Gazelle on board Valentine's private plane

Gazelle witnessing the test of Valentine's SIM cards in a church, which make people excessively violent and murderous

Gazelle asking Valentine how it feels to kill someone, after he shoots Kingsman agent Harry Hart

Gazelle at Valentine's celebratory party, as he prepares to activate his SIM cards worldwide

Gazelle about to fight Eggsy while protecting her boss 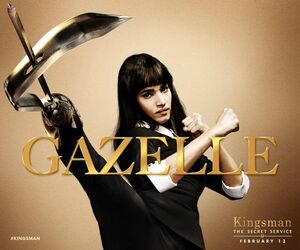 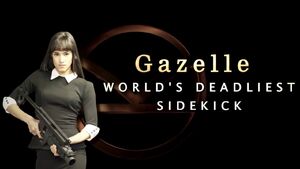