Naturally instilled on death and destruction from birth.
Have a tribalistic mind set.
Female Gazorpians: Can invent sex robots in order to avoid any interaction with the male population, while still creating new gazorpians to sustain their population.
Can use telekinesis.

Male Gazorpians: Fighting each other and procreating with sex robots.

Female Gazorpians: Having newly born female gazorpians placed in educational programs, while getting rid of male gazorpian babies by launching them out of their city with a catapult.

The dominant female half is led by Ma-Sha, who was voiced by Claudia Black.

At some point in time, an event known as "The Great Passive Aggression" caused the female part of the Gazorpian population to separate from the male part due to their increasingly destructive behavior. At some point after the separation, the female population created sex robots to mate with the male gazorpians in order to maintain the population. The male population regressed back to a highly primitive state where they no longer wear any clothes or utilize an understandable language. The female population, on the other hand, continued to develop into a prosperous society. Both sides would continue their lifestyles after their encounter with Rick Sanchez and Summer Smith.

Rick and Summer Smith go to Gazorpazorp, after Rick buys one of the sex robots (made by the female Gazorpians) that somehow ended up in a pawn shop, in order to learn more about Gazorpians (this happens after Morty has sex with the robot and it gives birth to Morty Jr. prompting both Rick and Summer to investigate). The male Gazorpians make their first appearance when they grab Summer through the portal that Rick opens forcing him to go after her. While on Gazorpazorp, Summer almost gets raped by the male Gazorpians until Rick rescues her but his portal gun gets destroyed during the fight. Rick attempts to fix his portal gun with parts from broken sex robots littered on the planet while Summer is forced to conceal herself in a burqa, disgusted at the backwards, patriarchal state of the planet. She is offended by Rick's suggestion that the male Gazorpians removed their females for efficiency due to their advancement and eventually caused a fallout that knocked them back to their "Stone Age".

Just then, a gigantic floating stone head arrives above the male Gazorpians to drop more sex robots, which the males copulate with. Rick and Summer grapple onto one of the robots and enter the stone head, the female Gazorpians reveal themselves who show that they are advanced and have a strong hatred for their male counterparts. Two of the female Gazorpians use telekinesis on Rick after he annoys them, forcing Summer and Rick to fake a master-slave relationship.

The female Gazorpians bring Rick and Summer to their underground matriachal utopia and are taken to their leader named Ma-Sha. Ma-Sha reveals that the female Gazorpians chose to separate themselves from the males. To continue their species they created the sex robots and separate the resulting babies by gender; the girls are educated into their society while the males are evicted onto the planet's surface. When Summer exclaims about the males being just children, Ma-Sha tells her that Gazorpian males mature within a day and become one of the most violent, aggressive species in the universe. Rick realizes that Morty is in big trouble, as is Earth. Indeed, as Morty Jr. matures from infancy to childhood, Morty is horrified as Morty Jr. expresses desire to cause destruction, murder and mayhem, and insists on keeping Morty Jr. indoors, claiming that the atmosphere outside is poisonous to Morty Jr. However, this causes Morty Jr's relationship with Morty to become strained as when Morty tries to divert Morty Jr's attention to a dance on a kids show, he ends up yelling at Morty Jr, causing Morty Jr to cry.

Summer explains to Ma-Sha that a male Gazorpian was born on her planet, causing Ma-Sha to question her on the state of gender equality on Earth. This prompting an argument between Rick and Summer about gender roles on Earth, culminating in Rick popping a massive, resounding fart in protest, to the disgust of the female Gazorpians. Upon hearing Summer refer to Rick as "grandfather" and realizing that Summer is the product of male/female reproduction, Ma-Sha orders their arrest. At the same time, Morty Jr. has grown into adolescence, picked up smoking and demands to be allowed to his warlike tendencies after watching documentaries on the History channel. Following an argument with Morty, Morty Jr. runs out of the house; discovering that the air is not poisonous to him, he runs away.

Ma-Sha sentences Summer and Rick to death, revealing after some bickering with Rick that they are to be crushed under a falling boulder. When Rick apologizes to Summer about their impending fate and complements her top, it gives her an idea. Summer protests by pointing out her top which Ma-Sha earlier complimented, which she explains was designed by a male Earthling fashion designer and proves it by showing them the design label. Saying that a fraction of male Earthlings are born gay, Summer explains that while gender separation has worked out well on Gazorpazorp, the same standards would not work on Earth nor would it be fair to enforce female Gazorpian standards on humans. Since the female Gazorpians acknowledge that she is better dressed than them in clothes made by a male, Ma-Sha should release them. Ma-Sha concedes, giving them a spaceship so that Summer and Rick can return to their "weird" planet where "women are equal but not really".

On Earth, Morty Jr. starts causing a rampage with chaos ensuing following an epiphany backed by music. Driven on Jerry's car, Morty tries to calm Morty Jr. down, which he eventually succeeds in. Morty admits to Morty Jr. that he is an alien and he wasn't a good father, but explains that he really wanted Morty Jr. to channel his destructive nature to creative outlets. Brad Anderson, the creator of the comic strip Marmaduke, walks by, and after a brief chat, he agrees revealing that Marmaduke is his creative outlet through which he channels his violent and sexual thoughts. After Brad Anderson leaves, Morty and Morty Jr. share a farewell hug just as Rick and Summer return to Earth, with Rick giving ownership of the Gazorpian spaceship to Summer. Beth asks where Rick has been, and Rick answers her by popping another fart which the whole family laughs at.

In a post credits scene, Morty Jr. is seen on a television show (watched by everyone in the Smith household) with a talk show host, having matured into a middle-aged man and now the best-selling author of a book titled "My Horrible Father" about his childhood experience. As Morty cringes, Beth assures him that parenting is a thankless task and in the end he did the best he could. Morty hopes that Jr. is eating enough.

After rigging the T.V. to pick up cable channels from all conceivable dimensions, one of the shows Rick and Morty watch is Gazorpazorpfield, which, as the title suggests, is an alternate version of Garfield, in which all the characters are Gazorpian versions of themselves. Rick and Morty also make reference to their previous adventure with the Gazorpians while watching it. 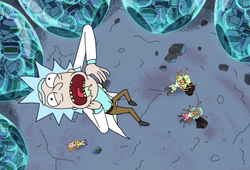 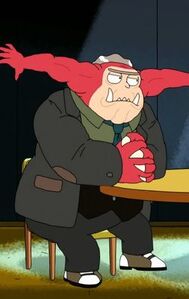 Morty Jr.
Add a photo to this gallery 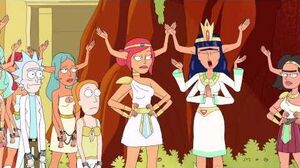 Claudia Black in Rick and Morty 2014 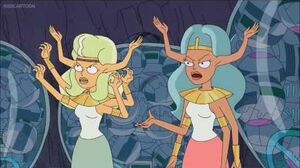 Opposite of Wubulubudubdub
Add a photo to this gallery

Retrieved from "https://villains.fandom.com/wiki/Gazorpians?oldid=3777418"
Community content is available under CC-BY-SA unless otherwise noted.