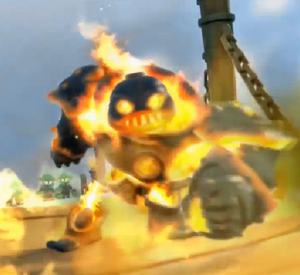 The Geargolems were likely made as soldiers and have many common traits. Until given orders or encountering an enemy, they tend to stand still and do nothing. The Geargolems, well incapable of speech, have a high comprehension level and can carry out orders.

The individual behavior of the Geargolems varies slightly, but all the types are extremely hostile and seem to be loners, evidenced by their inability to work together. The Geargolems have also been known to play possum by lying still.

As a whole, the Geargolems are living sets of armor-like metal with elemental power flowing thru it. The Geargolems use mostly the same armor design with the head being unique to all types. The element they possess seems to change parts of the armor to better suit the Geargolems attack methods.

The 1st Geargolem encountered in SWAP Force, the Fire Geargolem is also the most common. They follow an enemy then bathe the area with flames from their hands.

Well, all Geargolems are destructive, the Fire Geargolem is apparently a pyromaniac, and can not only be found burning things, but they are often found in fiery areas.

Earth Geargolems seem to be the least intelligent member of the group; they embody “Brawn over brain”. The Earth Geargolem simply smashes anything in range. When a foe is too far away, the send out a shock wave, which is also their basic attack.

Ice Geargolems is strange in the fact that they are emotionless; they rarely roar and all their attacks are blunt. The Ice Geargolem charges and fires 3 ice spears in an attempt to skew victims. The Ice Geargolem is also the only non-Adventure pack Geargolem to be found only in a specific area; namely, frozen zones.

Also, the Clock Geargolem seems to be the only Geargolem that welcomes help, as they are frequently teamed with Time Spell Punks.

The Vortex Geargolem is the only Geargolem to have a different torso design.

The Shadow Duke, well not confirmed to be a Geargolem, shares a few traits with them.

The Shadow Duke was a heavy-duty fighting machine that acted as a bodyguard to Pipsqueak. Well built like a tank, they also move like one, is painfully slow. But they make up for this by being one of the only foes in Skylanders: Giants to bear a one-hit-kill.

Well, they use the same body model as Shadow Knights, it must be noted that they are different enemies; Shadow Knights are bluish and much weaker well Shadow Dukes are gray and incredibly strong.