Egyptian god of the Earth

Lustful deity
Geb is the god of the Earth in Egyptian mythology. He is the brother and husband of the sky goddess Nut. He is the son of the Wind god Shu, and the Moisture god Tefnut.

The story of how the air, earth, and air were separated to create the cosmos is humanized through the deities of the Egyptian mythos. Geb and Nut angered the sun god Ra by being locked in constant embrace. By the orders of Ra, Shu lifted Nut away from Geb far into the sky, creating our atmosphere and allowing humans to live. Geb stilled longed for his wife, often being depicted with an erection while looking at her.

However, his lust didn't end with his sister, as he had an infatuation with his mother, Tefnut. His father, Shu, had fought the followers of Apep, and was wounded greatly, so he ascended to the heavens to heal. Geb took this opportunity to capture and rape Tefnut, nine days of darkness and storms followed.

When he was the next in line for the throne of the pharaoh, he reached out for the cobra on the crown of Ra. However, it deduced that Geb was guilty, and therefore was unworthy of the throne. Ra had his daughter, Wadjet, kill Gebs companions, and severely wounded Geb. However, he somehow became the pharaoh of Egypt anyways, up until he passed the kingship on to his son, Osiris. 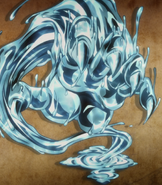 Geb in JoJo's Bizarre Adventure as the stand of N'Doul.