Host of the Hunter's Dream (formerly given the player's choice)

Free the Hunter from the Hunter's Dream (suceeds or fails based on player decision).

Gehrman is one of the very first hunters of the Healing Church. He became the host of the Hunter's Dream under the control of the Moon Presence and is the secondary antagonist and one of the final bosses of Bloodborne.

Gehrman has shoulder-length, grey hair and wears a black hat along with a brown leather jacket and trousers, a tattered mantle and a scarf. He can always be seen bound to an ornate wheelchair and he carries a cane with him. Also, his right foot is missing, replaced by what appears to be a peg leg. For most of the game, he is bound to a wheelchair, only getting out of it when ready to kill the Hunter.

At first, it is to believe that he is a senile old man, struggling to remember his name. This however is shown to be a ruse, as he is still completely capable of handing himself.

Despite his gruesome task as a hunter, Gehrman saw it as a "dirge of farewell, wishing only that his prey rest in peace, never again to awaken to another harrowing nightmare", implying he knew from the start that all of the beasts were once men, taking on his duty to put them out of their misery. When he is found asleep, Gehrman is heard crying, calling out to his friend to free him from the dream, implied to have been as much of a slave to the hunt as the Hunter is.

It is implied that Gehrman is suffering from extreme depression, stemming from Lady Maria's suicide and the chaos of the beast scourge. He maintains a calm exterior, occasionally offering jokes that range from sarcastic to vaguely disturbing.

When interacting with the Hunter, Gehrman acts like a grandfatherly figure, giving advice and information. Should The Hunter accept Gehrman's offer to free them from the dream, he shall bid them farewell, reminding them to "Fear the Blood."

As well, if they refuse, Gehman refers to himself as the "Hunter's Helper." When killed, he mournfully proclaims, "The Night, and the Dream, were long."

Despite appearing senile and wheelchair bound, Gehrman possesses inhuman speed, strength and agility. His signature weapon, the Burial Blade, can be used as a scythe and a curved sword. In scythe form, Gehrman can use the trick weapon to hook his opponents towards him. He wields a modified version of the Hunter's Blunderbuss which shoots a scattered blast for long range attacks.

Gehrman is able to perform the Art of Quickening, an arcane art invented by himself taught to his students to combat beasts with incredible speed. When active, Gehrman is able to increase his speed to the point that human eyes is unable to track him whilst shrouding himself with fog of arcane which reflects his aura.

Gehrman can create a devastating burst of arcane that takes 6 seconds to charge up. If the player does not escape the range in time, the blast may kill or severely injure them.

As a hunter, he is able to perform a visceral attack on the player should they get staggered by his Hunter's Blunderbuss.

At the start of the beast scourge, Gehrman was the first of the Yharnamites to take notice of the beasts and became the first hunter. His garb tells us that by making adjustments to his everyday clothing and tools, Gehrman equipped himself to hunt the beasts. At some point, Gehrman would associate himself with various, important figures in Yharnam and Byrgenwerth, including Master Willem, Laurence, Ludwig and Lady Maria.

Some believe that Master Willem tasked the hunters with the search of the residents of the Fishing Hamlet for eyes in order to further the research of the Byrgenwerth scholars. It is very likely that these hunters such as Gehrman and Lady Maria committed terrible atrocities in this village ultimately leading to the curse of the Hunter's Nightmare.

As the plague spread and more people became aware of it, the church began sending out specially-sanctioned hunters of their own, and even recruited civilians to join the hunt. Soon enough, Gehrman and his workshop became invalidated as the church set up a workshop of their own. Not wanting to fall behind, Gehrman called upon a Great One to help him, and with its assistance via a contract created the Hunter's Dream. As the hunt dragged on and hundreds of hunters came and went, Gehrman realized he was bound to the dream and could never escape it.

Should the player succeed in killing him, freeing him from the nightmare, the Moon Presence will appear to replace Gehrman with the hunter that killed him.

Gehrman standing up for the first time.

Gehrman, ready to free the Hunter from the dream. 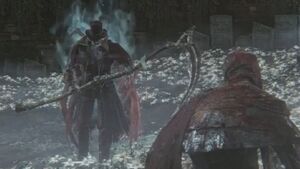 Gehrman in combat.
Add a photo to this gallery 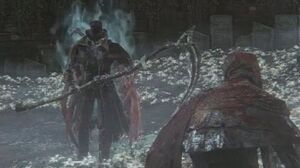 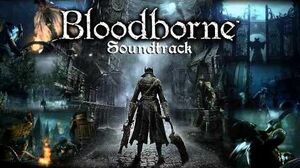 Bloodborne Soundtrack OST - Gehrman, The First Hunter
Add a photo to this gallery

Retrieved from "https://villains.fandom.com/wiki/Gehrman?oldid=3906623"
Community content is available under CC-BY-SA unless otherwise noted.