Destroy mankind and all of his creations (ongoing).

Geists are humanoid creatures of Grimm that resemble and behave in a manner similar to ghosts. They are capable of "possessing" inanimate objects.

In the "White" Trailer, Weiss is forced to face the Arma Gigas, but is unable to deal any real damage due to its size and enormous amount of durability. The Gaint Armor manages to hit Weiss, scarring her across the eye. However, Weiss gets back up and retaliates with Dust and Glyphs, causing the Armor to loose its sword and fight with its fists. Weiss, however, blasts the armor and traps it before striking the blow that kills the Grimm and destroys the Armor.

Chapters 3 and 4 of the manga reveals the Armor to be a giant suit of armor created by the Schnee Dust Company and possessed by a strange Possession-type Grimm made by merging several possession-type Grimm, presumably Geists, together. When Weiss reveals that she plans on studying at Beacon Academy in Vale as opposed to the school in Atlas, her father and the President's Secretary set up for her to fight the Giant Armor to prove her worth.

In "The Next Step", Team RNJR is hired by a nearby town to take down a monster that has been causing destruction. Upon finding the monster, they find it is a Geist possessing boulders and rocks in a Petra Gigas form. They proceed to fight the Petra Gigas, but it is durable and manages to tank their attacks. When they manage to separate its arm from the rest of its form, it possesses a tree trunk to use as a replacement limb. Ruby fires Fire Dust at the tree, but the Geist is unfazed by the fire and attacks with its new flaming limb. Jaune realizes that if they can remove the limbs, it will have no way of defending itself and be vulnerable. Nora and Ruby charge up an attack that separates the "main" boulder from the rest of the limbs, leaving it just a rock. The Geist leaves the rock and flees, only for Ruby to kill it with a well-placed sniper shot.

After meeting with General Ironwood, Teams RWBY and JNR, as well as Qrow Branwen and the Ace-Ops, are tasked with going to an abandoned Schnee Dust Company Dust mine and clearing out a Geist that has been possessing ice and rock, and killing those that were sent in to kill it. Upon arriving, the Geist flees into the mine. Teams RWBY and JNR fend off swarms of Centinels while the Ace-Ops take on the Geist, which as merged Dust crystals into its body, making it more dangerous and potentially explosive. The Ace-Ops fight the Grimm and catch all of the falling Dust crystals, and Clover manages to pull the Geist out of the ice and get rid of it.

A Geist named Floyd appears as a minor antagonist in RWBY Chibi.

Geists appear as units in RWBY: Amity Arena in their Petra Gigas forms; when deployed, they slowly walk forward. When killed, they collapse into boulders that deal massive damage in the area.

A Geist's base form is covered in bone-like spines with long, skeleton-like forearms and sharp fingernails. Due to its ghostly appearance, it lacks a lower body, instead floating through the air while leaving behind a black smoke trail. Its face consists of Grimm markings on a bone plate with a single eye.

A Geist is a possession-type Grimm, capable of controlling any object it possesses as extensions of its own body. Should it lose any of its limbs, it can repair the chink in its armor almost immediately by simply possessing another object in the vicinity. Its only real vulnerability is its "face", the central segment from which it maintains control of the form as a whole. All of its limbs must be destroyed at once in order to expose this vulnerability.

The specific Geist faced by Team RNJR in "The Next Step" possessed a number of large boulders and a tree, which were virtually immune to slashing attacks as well as elemental lightning and fire Dust ammunition. This Geist's limbs were not connected physically to one another and were held together by an invisible force that seemed to have no difficulty moving massive objects. Most of its attacks utilized its enormous mass and size in brute force attacks, though it also displayed the ability to use discarded pieces of its body as projectiles.

Once its host object is destroyed or severely disabled, it abandons the body, revealing its base form. The Geist has yet to demonstrate any combat abilities in this form, but it appears to be relatively frail; it was killed with a single shot from Crescent Rose. Additionally, it has been shown that Geists can be forcibly removed from their host objects by pulling the vunerable mask out with enough force.

When possessing rocks, it assumes its Petra Gigas subform, which allows it powerful attacks and massive durability. This form is resistant to most elements, and uses trees and rocks as weapons.

When possessing ice, it assumes its Ice Gigas subform. Similarly to the Petra Giagas, Ice Gigas are strong and durable, and are also capable of merging Dust crystals into its body for elemental attacks and more destructive capability.

The Schnee Dust Company created a new subtype known as Arma Gigas from "smaller possession-type Grimm" to possess a suit of metal armor. However, as at least two types of possession-type Grimm are known, it is unknown if Geists were the Grimm used, though it is likely. 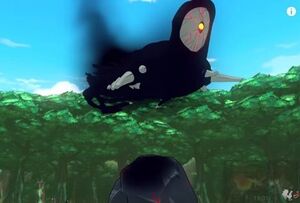 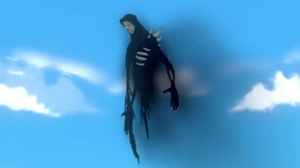 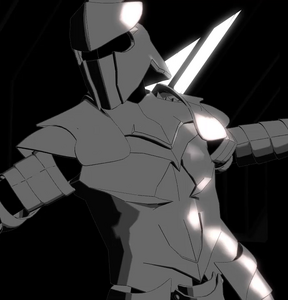 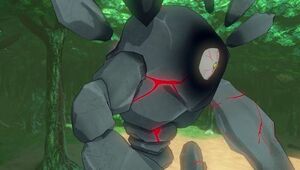 A Geist in a Petra Gigas form. 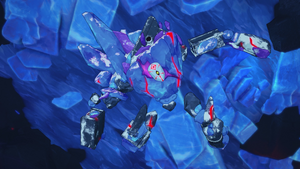 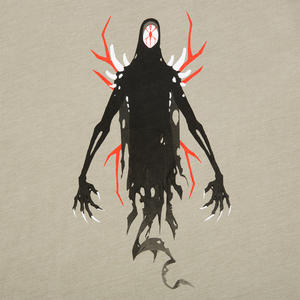 A Giest on a shirt design. 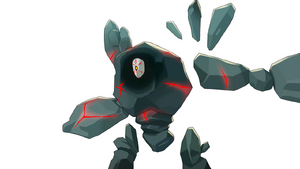 A Petra Gigas as it appears in RWBY: Amity Arena. 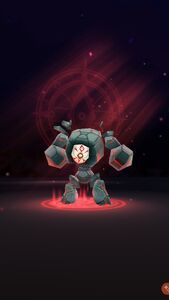 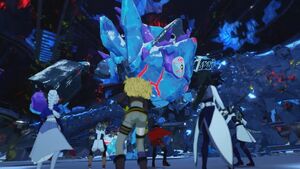 A Frosted Petra Gigas in the V7 trailer 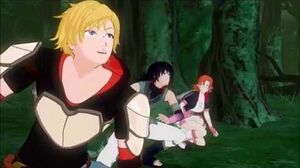