Creating powerful soldiers by collecting shadows of powerful opponents to implant them in powerful zombies.

Defeat Kaido for massacring his former crew (both failed).

He is voiced by Katsuhisa Hōki in the Japanese version of the anime, and by Christopher Guerrero in the English dubbed version.

Moriah is extremely laid back and disinterested in fighting his enemies. He is arrogant, power crazed and sadistic as he has no qualms of taking people's shadows to create his zombies army and leaving the shadowless victims to be vanish only when every daytime. He has no loyalty to the World Government when they send Bartholomew Kuma to assist him only refused to deal the Straw Hat Pirates himself. His own weakness has made a fool of himself after his defeat by Luffy and the World Government revoked him as a Shichibukai when a higher ranked official send Doflamingo to eliminate him after the War in Marineford.

Moriah cared for his old crew and subordinates. However, he will never forgive anyone who murdered his subordinates such as Kaido and Marshall D. Teach.

As Gekko Moriah lacked training and always relying on his devil fruit powers to steal shadows, Moriah has endurance and stamina. He was considered to be the weakest of all Shichibukai (besides Buggy).

Moriah ate a paramecia devil fruit known as Kage Kage no Mi (Shadow-Shadow Fruit). Moriah holds the ability to steal shadows from people to absorb their strength or place them in corpse to reanimate them as zombies as well as mimicking his victim's fighting abilities such as Oars mimic Luffy's attacks and Ryuma mimics Brook's attack. When absorbing shadows, Gekko Moriah became larger and gain strength but unable to hit his enemies with speed such as Luffy in gear second and Jinbe. He attacks from the shadows. His zombies has weakness for normal salt and ocean. Moriah can create a box of shadow bats to trap his enemies.

Moriah wield a large scissors to cut shadows from either a friend or foe. He can detach the scissors as two swords.

Sometime before the series, Moriah was present at the execution of Gol D. Roger and witnessed his famous speech, which made Moriah's dreaming of becoming the new Pirate King. After the execution he, like many others, raised his flag and started to make a name for himself in the New World.

Life as a Pirate

Sometime later on, Moriah became a pirate whose strength could be strong enough to survive in the New World. While in the New World, he and his entire crew encountered Kaido and Kaido manages to massacre Moriah's entire crew leaving Moriah alive and beaten, which affected his entire outlook about subordinates. After the loss of his crew, Moriah set about trying to gain enough power to defeat Kaido.

Ten years before the Straw Hats came to Thriller Bark, Moriah, along with Absalom and Perona, sought out a man named Hogback who had the ability to help reconstruct corpses. Upon meeting the doctor, Moriah offered him a way to bring his deceased love, Victoria Cindry, back from the dead for his allegiance. With the use of his Devil Fruit powers, Moriah implanted a stolen shadow into the corpse and the doctor had his allegiance with the Shichibukai.

Together with Hogback, Absalom, and Perona, Moriah set up his ship, Thriller Bark, and traveled to the Florian Triangle. There they began to ambush anyone who entered, looking for those with strong shadows, and Moriah started making zombie minions with shadows stolen from his victims and creations supplied by Hogback.

Five years ago, a skeleton named Brook came to Thriller Bark in hopes of fixing the rudder to his ship. He was captured and Moriah implanted his shadow into the corpse of Ryuma(a deceased famous samurai who was said to slay a dragon). However, Brook returned to Thriller Bark shortly afterward and purified several of Moriah's zombie minions in an attempt to retrieve his shadow. Though Brook was defeated by Ryuma, Moriah was forced to rebuild his army with new shadows.

After four days of sleep and some nightmares, Moriah was awoken by his servants and told of the night attack to be commenced on the Straw Hat Pirates, which he then prepared for.

As they arrived, Moriah manages to capture Sanji and Roronoa Zoro's shadows and implants them in the zombies Inuppe and Jigoro, respectively. Later, Luffy was brought to Moriah, who expressed his desire to become the Pirate King. Moriah plans to use Luffy's shadow to resurrect an exceptionally powerful zombie, one that possibly can defeat Kaido. Luffy attempted to escape, but was incapacitated by Perona's Horo Horo no Mi, allowing Moriah to cut off his shadow.

Moriah proclaimed that he would not have lost to Kaido in the New World if he had a powerful minion before ordering his soldiers to open the door to the special freezer. When Absalom informed him that Brook had returned and was purifying the zombies once more, Moriah merely told him to do something about it himself. Soon afterward, Moriah, Hogback, Absalom, Perona, and Kumashi walked down the hall to the special freezer, with Moriah listening to Hogback explaining the legend of a corpse of a being that he found in the ice country before stating that they would revive that legend known as Oars.

Moriah approached Oars's corpse and placed the shadow into the gigantic corpse. After a few seconds, Oars began moving and roared and cries out to Sanji to bring him food, prompting Nami, Usopp, and Tony Tony Chopper to fall out of Kumashi, which Moriah noticed. However, Moriah was paying attention to Oars, whom he noted with delight was easily ripping off his large chains.

While his zombie minions brought in large amounts of food to satisfy Oars's hunger, Moriah explained to Oars how he was a legendary villain from 500 years ago who was revived to become Moriah's underling. However, Oars refused to serve Moriah and broke out of the freezer wanting to become the Pirate King instead.

After being informed of Oars climbing up Thriller Bark's mast, Moriah noted that they will be able to obtain the shadows of even stronger people and create more special zombies before informing Hogback that they would be needing more extremely powerful zombies. When Hildon arrived and informed Hogback of Luffy, Zoro, and Sanji waking up and learning how to purify zombies, Moriah instead allowed Perona to deal with them herself. Moriah told Hogback that he would stay and play with Oars for a bit until he has control over him.

Soon afterward, Moriah was confronted by Luffy. When Luffy demanded that Moriah give back the shadows he had taken and threatened to beat him up, Moriah explained that the shadows he stole would return to their owners if he wanted to do so and that he would need to be weakened in order to do this, though he did not believe that Luffy would even be able to touch him at his current level of power. Using his Kage-Kage no Mi, he summoned Doppelman to block Luffy's subsequent attack, Moriah admitted that he once wanted to become stronger before saying that he would become the Pirate King if he manages to take away the strength from others. When Luffy proclaimed that he would be the one to become the Pirate King, Moriah said that Oars said the same thing and that Luffy's will was strong in Oars before revealing that Oars would eventually become completely obedient toward Moriah and lose any memory he had on Luffy. Moriah proceeded to attack Luffy with Brick Bat while claiming that a child who underestimates others will be ultimately defeated in the end. However, Luffy suddenly jumped off the observation deck and kicked Moriah from below, angering him.

Eventually, Oars returned, and Moriah orders him to attack the Straw Hats and transport the survivors to their ship. After telling Oars to displays all of his power, Moriah ran away, making Luffy to pursue him. While continuing to run, Moriah taunted Luffy by proclaiming that all of his crewmates would be falling victim to his powers while Luffy was chasing him. Eventually, Luffy seemingly caught up with Moriah and tackled him, only to discover that it was actually Doppelman, which quickly returned to Moriah himself.

He was present with his fellow Shichibukai as the marines prepared to execute Ace who he was shocked to learn was Gol D. Roger's son.

He was very displeased to see Luffy again and shouted his name in anger before trying to steal his shadow again to power Oars. Jinbe intervened by dousing Moriah's zombies with salt water, much to his displeasure. Moriah was then shocked to hear that Luffy's father was really Revolutionary Dragon and was left speechless by this news. Moriah continues his fight against the Whitebeard Pirates until Blackbeard Pirates appears on the battlefield to fight and kill Whitebeard. Moriah witness Blackbeared taking Whitebeard's tremor-tremor fruit and causing chaos on the battlefield. The fight between the pirates and marines continues until Shanks arrives and declare the war over.

After the war, Moriah is cornered and attacked by Donquixote Doflamingo and the Pacifista army. Moriah gets angry at Doflamingo. Doflamingo reminds, Moriah that he was too weak to be a warlord. Moriah asks Doflamingo whether Sengoku puts him up to killing. Doflamingo told Moriah to guess again. As Doflamingo was about to kill him, Moriah suddenly disappeared.

Knowing Moriah is not dead, the World Government kept his bounty active. Moriah and Absalom travels to the New World.

Gekko Moriah and Absalom travels to an island ruled by one of the Yonko, Blackbeard. While traveling on the island, Absalom and Moriah splits up. Moriah attacks the people on the island with his zombie army in an attempt to call out Blackbeard and Absalom. Shiliew attacks the zombies with his sword and slashes Moriah. Moriah is surprised to see Shiliew appear after no longer being invisible. Moriah sees Absalom on the platform who then transforms into Catarina Devon. Moriah remains shocked as Catarina tells Moriah that Absalom is dead. Blackbeard summons a small earthquake to warn Moriah and asks him to join the Blackbeard Pirates. 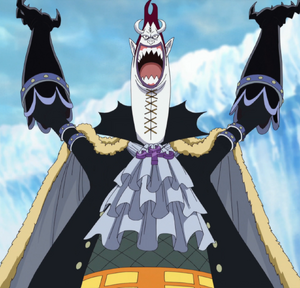 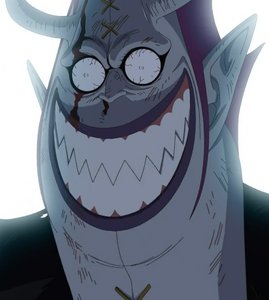 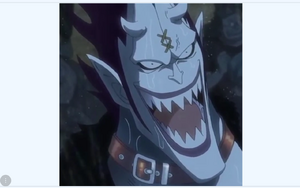 Moriah when he was younger. 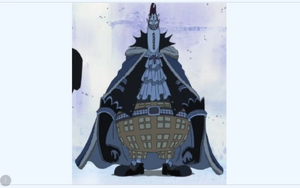 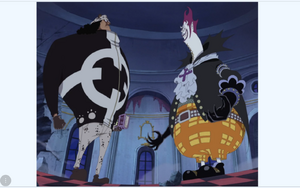 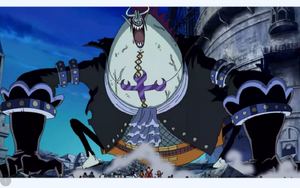 Moria after he absorbed a thousand of shadows, "Nightmare Moriah".