Accomplish missions wherever they are deployed to.

GEKKO or IRVING's are an Optical-Neuro AI-controlled unmanned bipedal battle drone series. They have many varieties in design including a variant called Suicide GEKKO, whose main form of attack is blowing up via a nuclear demolition charge, taking out all around it. They appear as common enemies in the video games; Metal Gear Solid 4: Guns of the Patriots, and Metal Gear Rising: Revengeance.

In 2014, the Gekkos were mainly deployed by the PMC during Liquid Ocelot's Insurrection. First, they were deployed in the Middle East by the Praying Mantis PMC for heavy weaponry assistance against the town's rebelling militia. Afterwards, they were sent to South American to assassinate Solid Snake, assist the Pieuvre Armement PMC to wipe out the remaining rebels, capture Doctor Naomi, and kill a recently appearing Cyborg Ninja, who was actually Raiden. Finally, a pair of Gekkos were deployed in an attempt assist the Raven Sword PMC in assassinating an escaping Solid Snake and Big Mama.

A large handful of Gekkos were stationed outside, around, and in Shadow Moses Island, wiping out any hostile personal, specifically the aforementioned Solid Snake. After intercepting the core of the base, Solid Snake was faced with several Suicide Gekkos to fend off while Otacon repaired Metal Gear REX. An army of Gekko units were stationed on the docks of Outer Haven, but were deactivated due to Otacon's/Sunny's FOXALIVE virus.

After the assassination of Liquid Ocelot, Gekkos were still mass produced despite being shut off after the Insurrection, going up to at least the year 2018. There, during the Desperado Incident, Raiden had to fight a now camouflaged Gekko unit, now with the surname Unmanned Gear (usually called UG).

Gekkos, being designed to be a compact Metal Gear, have pairs of artificially created muscle tissue covered legs that contains extreme strength, able to jump a very long distance with them, can crush a human with no effort, and are known for their powerful kicks that can flip a transport truck over. Gekkos can only see heat and visible light, as well as aural sensors so it can sense and hear movement.

Usual Gekkos have a beak mounted machine gun that fire deadly, armor piercing rounds as well as a retractable cable that can be controlled and acts like an appendage. These cables can pick up, examine, and restrain objects. Its domed head is nearly indestructible, but their semi organic legs are not, making these their weakness so that can be tipped over. Another main appearance in its arsenal is a family of hand grenades, but its more unconventional forms of weaponry are anti-tank missiles, M2 Browning machine guns, grenade discharging arrays, and ECM arrays.

Dwarf Gekko (aka Scarabs) are small, unmanned weapons that guard important areas and were used for reconnaissance. They are often deployed for combat in and to infiltrate compact spaces, which as full-sized Gekko are obviously incapable of doing. While one or a few can be easily defeated, the Dwarf Gekko often attack in large groups and that can be bad.

Double Tripod are a variant of Dwarf Gekko deployed in 2018. Six are known to be in existence during the World Marshal Incidents. One was involved during the Abkhazian Coup. They are are bonus enemies in Metal Gear Rising: Revengeance which require certain conditions to meet them.

On the Shadow Moses Island stage, when the background of the stage blows apart, there might be two Gekkos on the other side observing the battle. A trophy of a Gekko can be obtained by clearing All-Star mode with 10 fighters.

The Gekkos can still have a possibility to appear in the background of the Shadow Moses Island stage. A Gekko support spirit with a jump increase ability can be purchased from Sheldon's Place for 1,000 spirit points. 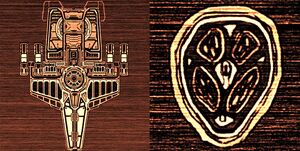 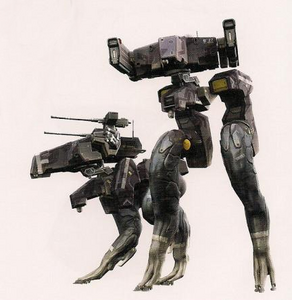 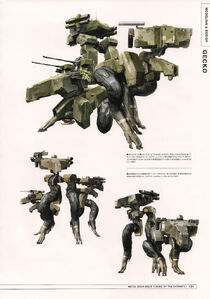 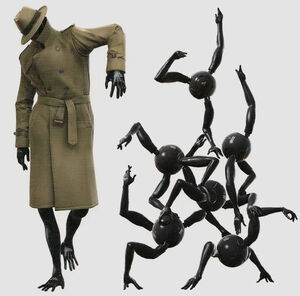 Concept Art of a Dwarf 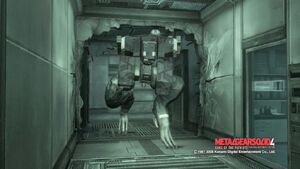 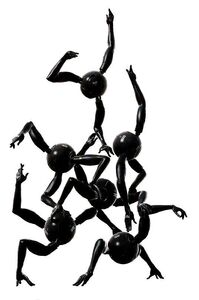 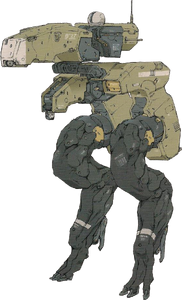 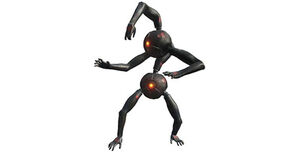