The Gelatin Monster is a one-time villain that only appeared in the Phineas and Ferb episode "Day of the Living Gelatin". It is a gelatinous purple monster that was accidentally created when Phineas and Ferb created a large amount of Gelatin in Isabella's pool, but ended up getting hit by Heinz Doofenshmirtz's Turn-Everything-Evil-Inator, resulting in the gelatin coming to life and becoming evil.

When Phineas and Ferb thought that Gelatin was fun to play on, they decided to create a giant gelatin in Isabella's pool. Meanwhile, in Doofenshmirtz Evil Incorporated, Dr. Doofenshmirtz was planning on using a new -inator he invented known as the Turn-Everything-Evil-Inator, on Perry the Platypus. However Perry managed to jump out of the way. As Doofenshmirtz continued to fire the -Inator on Perry, one of the shots ended up hitting the giant mold of Gelatin, resulting in the Gelatin coming to life.

Phineas, Ferb, Isabella, Buford and the Fireside Girls blamed Baljeet for the Gelatin turning evil as he placed curry in the gelatin. When Candace arrived to see what's going on, the Gelatin Monster ate her, along with the gelatin mold of Jeremy's head. Phineas and the other though the best way to stop the creature and save Candace was to shoot the Gelatin Monster with water. So they grabbed several water guns and water balloons to defeat the monster. During all this, Doofenshmirtz revealed to Perry the his Turn-Everything-Evil-Inator has a button that sends a signal to bring all the things that have been hit by the beam straight to his lair. With a push of a button, the Gelatin Monster "melted" down the drain in Isabella's pool, although the children tought that it was killed in the process.

Phineas & Ferb: Across the 2nd Dimension the Video Game

The Gelatin Monster makes an appearance as the first boss in the video game; Phineas & Ferb: Across the 2nd Dimension. While Phineas, Ferb, Candace, Perry the Platypus, and Heinz Doofenshmirtz were in the Gelatin Dimension, they were searching for the source to jump to another dimension.

While they were in the sewers, a giant Gelatin Monster appeared and attacked them. Then suddenly, a secret agent from the Gelatin Dimension of OWCA arrived to save them; Terry the Turtle AKA Agent T. He gave Perry a weapon known as the Carbonator so the two could defeat the monster. However, just as the two were about to defeat the creature, The Gelatin monster smashed through a wall and devoured a new form of Gelatin. This resulted in the Gelatin Monster's molecular structure to change, making it immune toward the Carbonators. 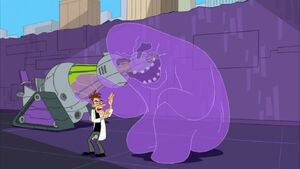 The Gelatin Monster reporting to Doofenshmirtz.