Villains Wiki
Register
Don't have an account?
Sign In
Advertisement
in: Image Needed, Noncorporeal, Doctor Who Villains,
and 17 more

Doctor Who: The Unquiet Dead

Billions of Gelth who lost their physical bodies

Lying through people with psychic powers.

Presenting themselves as peaceful and facing extinction.

Manipulate Ninth Doctor into helping in allowing Gwyneth to open the time rift further to accept through more of their kind into Earth.

(With the rift opened wider) Let all of the billions of Gelth through and take the planet by force.

The Gelth are the main antagonists in the Doctor Who episode "The Unquiet Dead".

The Gelth had humanoid ghost-like bodies made of blue gas and they make ghostly screams. When revealing their true colors, They turn into orange color with red eyes and speaks in demonic voices.

They lost their bodies in the Time War against the Daleks and so planned to find a way to get new bodies. On Christmas Eve 1869, a Gelth travels to a funeral parlour in Cardiff and inhabits and takes over the corpse of Mrs. Peace and kills Mr. Redpath (who is the grandson of Mr. Peace) by strangling him and then snapped his neck. The undertaker Gabriel Snee tries to keep Mrs. Peace in her coffin, but to no avail and she went waking into the street with Gelth possessing her lifeless body.

The Gelth inside Mrs. Peace's body was next seen at Charles Dickens' performance of "A Christmas Carol". Charles Dickens saw the Gelth and the Gelth left Mrs. Peace's body and flew around and then went into a gas lamp. Two Gelth later inhabit the corpses of Mrs. Peace and Mr. Redpath and attempt to kill Rose Tyler, but The Ninth Doctor came in time to save Rose in the nick of time. The two Gelth tell The Doctor to open the rift and tell him that they were dying. The two Gelth then leave the human corpses of Mrs. Peace and Mr. Redpaths and went into gas lamps.

Snee's servant Gwyneth (who had clairvoyant abilities) communiacates with the Gelth, who wish to inhabit human corpes in place of their old bodies. Gwyneth opened the rift and released the rest of Gelth in the room. However, there were a few billions more than the Gelth originally implied. That was when the Gelth reveal their true colours; it turns out the human corpses was not enough for them and their plan was to kill the entire human race to make corpses in order for their kind to survive and take Earth by force. The Gelth have the Doctor and Rose cornered and trapped in a dungeon.

The Doctor tells Gwyneth to sent Gelth back because them were not angels and they lie to her. Gwyneth realise the truth, but she can't sent Gelth back due to them being to strong, but she is strong enough to hold the Gelth in the position she is standing in. Gwyneth tells the Doctor and the others to leave the house so she can light a match to destroy the Gelth. Gwyneth lights the match, which causes a gas explosion that destroys the Gelth, killing herself in the process. 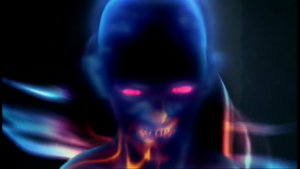 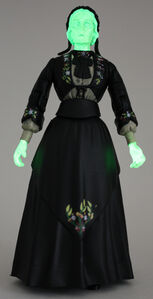 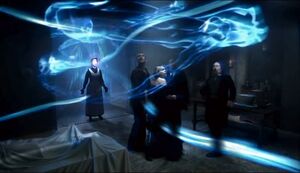